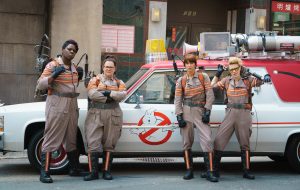 Walk into any comic con these days and you can’t help but notice a replica Ecto-1 parked outside the hotel and fan boys dressed in costume, complete with proton packs. For a movie that is 20 years old, it is remarkable that fans still long for additional adventures for a concept that cries for mass merchandising. And that is exactly what Rory Bruer, president of worldwide distribution for Sony Entertainment, hopes will happen. Disney controls the majority of the Marvel Cinematic Universe franchise and Star Wars, so a competing rival has decided to remake a beloved classic and launch the first of what will become a series of motion-pictures. But one has to wonder where are the Ghostbusters tee shirts, toys and merchandise? Disney made a ton of money (an estimated $700 million) on Star Wars merchandise this Christmas. And with professional bean counters projecting $50 million in ticket sales for the opening weekend one has to wonder what strategy Sony executives plan to implement… or do they have one? 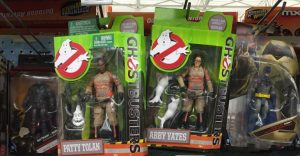 The sexist outcry from a vocal minority of fanboys was only one of the problems that plagued the movie before the July 15 release. Some cried foul with Hollywood’s growing percentage of reboots, the sacred legacy of the original film was threatened, and the jokes in the trailer suggested impending disaster. It is not my intention to debate or defend but having watched Ghostbusters I would implore Sony to create a better marketing strategy, a stronger online presence through social media and hold firm in their conviction that a potential franchise is there… even if you do not see cross-promotion on television commercials or products on the store shelves at Wal-Mart or Toys “R” Us. (There are toys but few and far between.)

The entire film pokes fun of practically every aspect of the franchise with many behind-the-scenes jokes that might go over the heads of the audience who know nothing of the production problems and advanced protest among fanboys. When actress Leslie Jones attempts to stage dive and finds herself flat on her back instead of crowd surfing, she remarks: “I don’t know if it was a race thing or a lady thing but I am mad as hell.” This type of joke poked fun of both the sexist outcry and racial disparities, and the audience roared with laughter during the showing my wife and I saw the other day. If you cannot stop for a couple hours and stop taking things seriously and enjoy a number of belly laughs… then you shouldn’t be going to the theater. 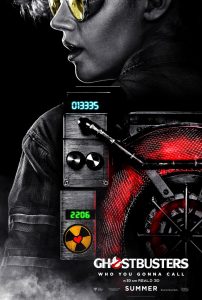 Ghostbusters (2016) is clearly — and effectively — a nod to the original comedy, with numerous Easter Eggs, in-jokes, cast cameos and scene reprisals. I counted five cameos from cast members of the 1984 movie, two busts of actors who were in the original and have passed on since (keep an eye out for those — blink and you will miss them), appropriate familiar music cues in key scenes and of course, catch-phrases. There were so many Easter Eggs I could list two dozen and still overlook listing a few that flew past the screen. There was a labor of love — and a budget — to ensure the movie gave fans something to root for, enjoy and look forward to additional sequels. (Check out the official movie poster with Kate McKinnon. The number 2206 is a nod to Sigourney Weaver’s apartment number in the original film. See what I mean?)

Four women launch a ghost chasing business in New York City with mild success, through trial and error, while the Mayor of New York (played by Andy Garcia) insists that the ladies leave the ghost busting to the U.S. Government, who proceeds with their continued investigation of the supernatural. Naturally, the big wigs do not see the big picture until armageddon comes to the forefront and the residents of New York turn to the Ghostbusters. Melissa McCarthy and Kristen Wiig are acceptable in their roles but sadly, play straight-men (or in this case, straight-women) until the climatic scene where they are firmly resolved in the ghost busting profession, ignoring a smear campaign from the harshest of skeptics. Who cares if ghosts do not exist or the fact the roles are played by women? They are here to kick butt — literally. Leslie Jones and Kate McKinnon supply the majority of the best jokes with McKinnon clearly enjoying the role of Dr. Jillian Holtzmann, an eccentric engineer.

Chris Hemsworth plays the dim-witted secretary with a physique that women drool over. At first I felt his talents would have been better suited for a different movie but as the story progressed he played a much larger role in the story and becomes an essential commodity. There are plenty of laughs in this movie and probably more than the original 1984 classic, when compared. Special effects were top notch.

The director, Paul Feig, recently remarked that the entire film clocked in over four hours and was cut down shy of two hours. One of the deleted sequences can be seen during the closing credits (a musical sequence) and looking back now I think the musical number would have been better suited in the film itself. It certainly would have added to the fun. One has to wonder if the finished product was above average (with scenes silly and/or darkly serious in nature) and the mounting pressure from self-obsessed fanboys caused the studio to reconsider a number of cuts, thus altering a canvas that was perfect in the first place. Perhaps no remake or reboot is without a subset of people on the internet, with an unhealthy fixation of hating the new production. But is this remake good enough to prove the trolls wrong? Ghostbusters (2016) could have been better and it could have been a lot worse. Certainly not the best film of the year but of all the movies released since January 1, this is one of the three most entertaining. Which goes to prove that reading negative reviews about a product not yet released on the market is lack of judgment… one should never judge a book by the cover. And to best enjoy this film I recommend you avoid comparing this to the original. There’s no point in trying, anyway.

If I had any complaint it would be the structure of the film itself. The cast and crew spent the majority of the movie establishing an origin for the characters and less time doing any actual ghost busting. When Ramis, Murray, Aykroyd and Hudson were on the job in the original 1984 movie, you believed they were really pest exterminators getting the job done. Yes, the scene with Holtzmann introducing her latest gadgets and the cast failing to have any control over the new devices in the alley was hilarious. But now that we have the origin established I hope the sequel goes straight into the cat-and-mouse game of ghost busting. Movie adaptations of comic books have recently taken a page out of the playbook and avoided retelling the origin we already know… and for that I thank the producers who acknowledge the fanbase.

Regarding the closing credits: you do have to stay through the entire credits sequence and yes, a very important post credits scene at the very, very end.

The fifth film in the Walt Disney Signature Collection has been revealed! After Snow White & the Seven Dwarfs (1937), Beauty …