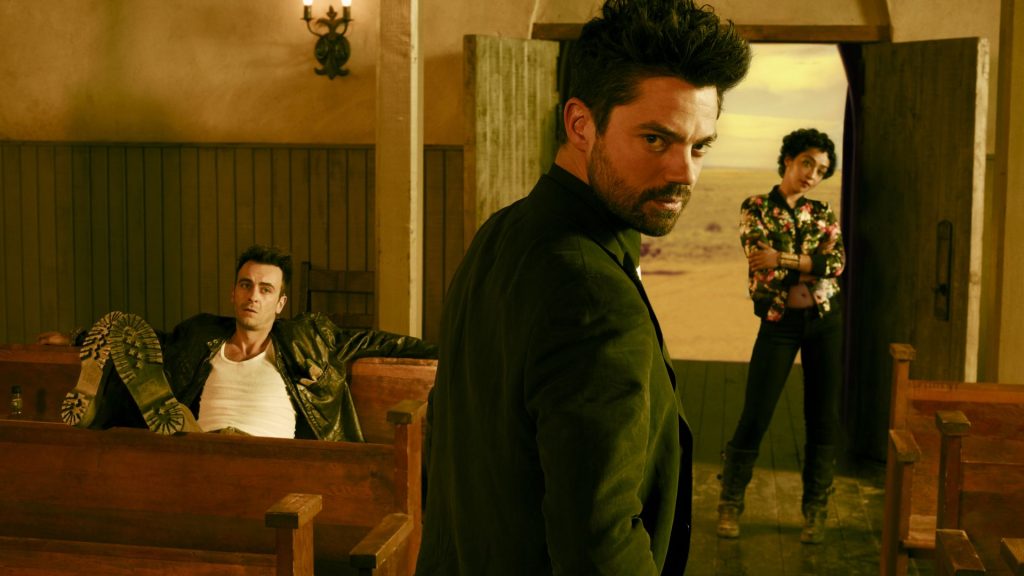 Do you like your television programs laced with vampires, hitmen, psychopathic killers, demons from Hell and a little bit of naughty and nice? AMC’s Preacher is twisted fun but certainly not for everybody. Based on the comic book of the same name, published by Vertigo Comics, Preacher tells the story of Jesse Custer, a preacher in the small Texas town of Annville. Custer is accidentally possessed by the supernatural creature named Genesis, the infant product of the unauthorized, unnatural coupling of an angel and a demon. The incident flattens Custer’s church and kills his entire congregation. Genesis has no sense of individual will, but since it is composed of both pure goodness and pure evil, its power might rival that of God Himself, making Jesse Custer, bonded to Genesis, potentially the most powerful being in the universe.

Driven by a strong sense of right and wrong, Custer journeys across the United States attempting to literally find God, who abandoned Heaven the moment Genesis was born. He also begins to discover the truth about his new powers. They allow him, when he wills it, to command the obedience of those who hear and comprehend his words. He is joined by his old girlfriend Tulip O’Hare, as well as a hard-drinking Irish vampire named Cassidy. During the course of their journeys, the three encounter enemies and obstacles both sacred and profane, including: The Saint of Killers, an invincible, quick-drawing, perfect-aiming, come-lately Angel of Death answering only to “He who sits on the throne”; a disfigured suicide attempt survivor turned rock-star named Arseface; a serial-killer called the ‘Reaver-Cleaver’; The Grail, a secret organization controlling the governments of the world and protecting the bloodline of Jesus; Herr Starr, ostensible Allfather of the Grail, a megalomaniac with a penchant for prostitutes, who wishes to use Custer for his own ends; and several fallen angels. 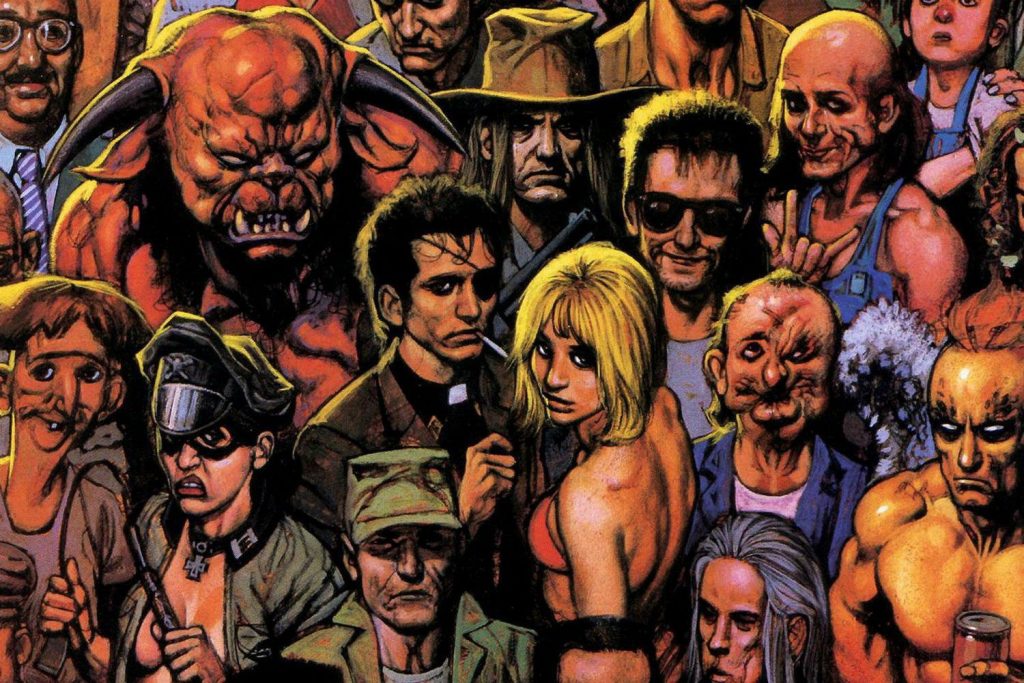 Produced by Evan Goldberg, Seth Rogen and Sam Catlin, the television series varies greatly from the comic book while remaining faithful to the concept and overall agenda. The comic book carries the F-bomb a little too far (too many drops to claim “artistic” reasons) and thankfully the network executives at AMC choose to limit the cussing; never with the F-bomb. The television series features Jessie Custer, played by Dominic Cooper, actually serving as a preacher throughout the first season; the comic book rarely demonstrated this. The character of Odin Quincannon, a perverted meat baron, never showed up in the comics until a third of the way through the run; he is played superbly by Jackie Earle Haley beginning with the pilot episode.

The comic book rendition was way over the top when it came to religion and those sensitive to find such blasphemy a turn-off may want to consider avoiding the television program. Tamed down by comparison, the television counterpart leaves the door open to multiple forks in the road and may venture down that path in a future season. Basically, the first season sets up the backstory for what is to come beginning in season two. The pilot episode was four stars all the way. Critics in general appreciated the fast pace, and the creative storyboarding that obviously went into production. Beginning with episode two, and three consecutive episodes following, character studies and backstories slowed the pace and apparently ratings dropped as a result. But this is not one of those cerebral-type programs that require pause between episodes to dwell on what you saw. Binge watch this series if you can and the further you stick with it, the unsolved questions are explained. 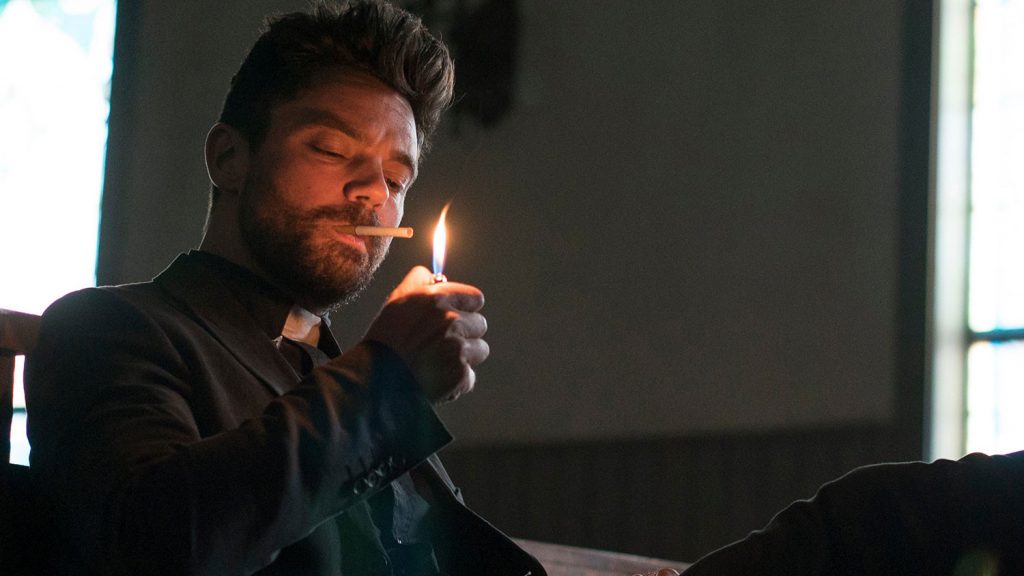 If you never read the graphic novels, you are not alone. AMC’s ratings verified more people watched the television program than those who read the comic. Preacher ran a total of 75 issues (counting annuals and a limited four-issue series) from 1995 to 2000; the peak was in August of 1996 when Vertigo announced 50,000 monthly sales. The pilot episode on AMC reached 4.2 million viewers. (By episode five, the ratings had slipped to 2.9.) AMC’s major setback was going up against HBO’s Game of Thrones but not everyone subscribes to HBO. With Fear the Walking Dead and many other new original programming in the pipeline, one questions whether AMC plans to go independent in the near future as a paid subscription station in the same manner as HBO and Showtime. AMC certainly needs more cult programming and larger ratings to ensure such an endeavor.

Jesse learns through trial and error just what powers Genesis gave him, even sending Eugene to Hell (not featured in the comics), and Odin’s backstory involving the slaughter of his family and comparing the intestines of a cow with that of his daughter, are some of the twisted scenes that keep the viewers questioning what is about to happen next. The ten episode first season is basically a prequel to the comic book, leaving us at the end of the season finale with a shadow of things to come. The producers borrowed characters and the basic set-up from the first two issues of the comic book to create the ten filmed episodes. Beginning with the second season, especially for those who read the comics, you will have your choice of demonic villains to look forward to. Jessie Custer, along with Tulip and Cassidy, have an agenda and they mean to walk the Earth and kick demonic ass. 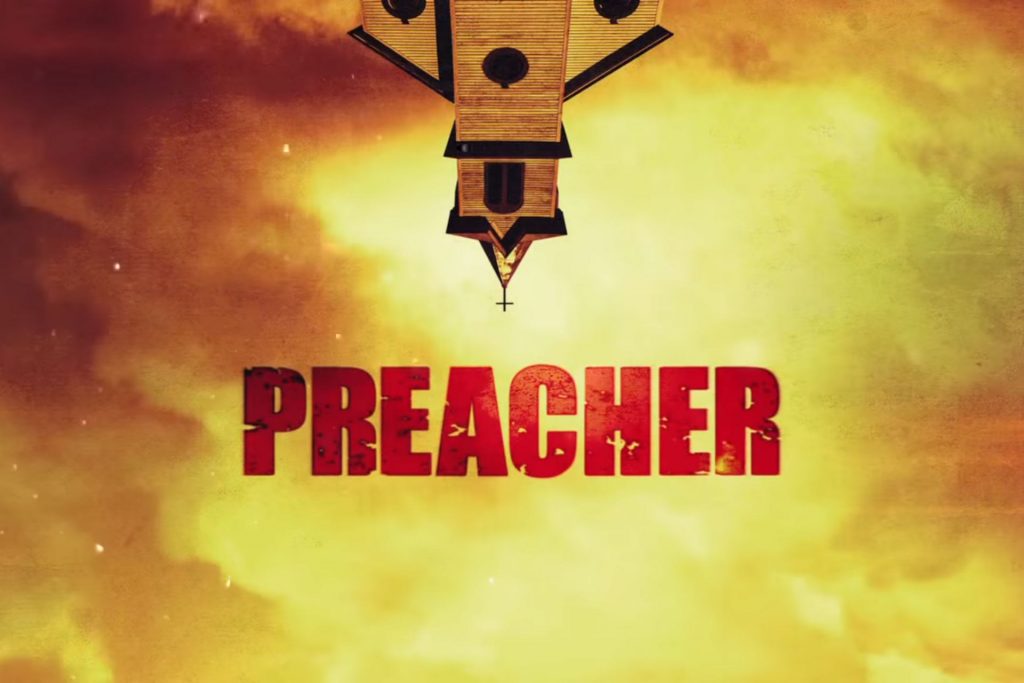 AMC already commissioned a second season, consisting of 13 episodes, but for those who enjoyed what is certainly one of the best television programs this season that did not involve dragons, be prepared for a blasphemous and sexually deviant art form when the second season hits the screen. Whether you bailed out after watching the pilot because you simply did not get it, or haven’t made time to binge watch, Preacher comes recommended… after you are done binge watching season six of Game of Thrones.

In case you missed it, in honor of #BatmanDay 2016, Justice League director Zack Snyder took to Twitter …

✨Welcome to Themyscira. I am proud to present the NEW trailer for #WonderWoman! ✨ pic.twitter.com/8F3G0LMz5Y — …