One thing about attending San Diego Comic-Con, there are a great amount of offsite events happening throughout the week that are a lot of fun! Saturday, July 23 at the Hard Rock, the Telltale team hosted a crowd play event for the upcoming game ‘Batman – The Telltale Series‘. This was my first crowd play event so I wasn’t sure of what to expect. The first feat in attending was learning of the secret venue for the event. Very Batman-esque. And before one could attend the event, you had to obtain a wristband earlier in the day. So just to get into the event was an adventure in itself, and in pure SDCC fashion! 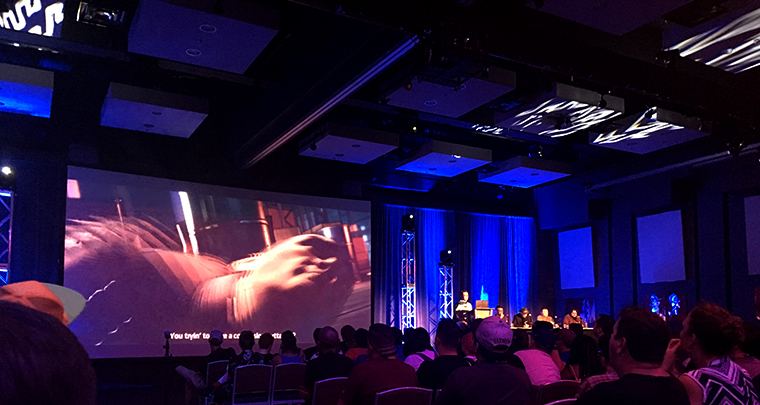 The event was set in the Legend ballroom of the Hard Rock Hotel San Diego which was turned into a theater setting. Once everyone was seated, the event began. I learned it wasn’t the first crowd play event hosted by Telltale games. Basically, this event was like a public Choose Your Own Adventure videogame session with the crowd shouting their choice. The panel guests were Troy Baker (who voices Batman), the episode’s director Kent Mudle and Telltale’s Head of Creative Communications, Job J. Stauffer. And dressed as our cape crusader moderator and gamer was Greg Miller from Kinda Funny.

Episode 1, “Realm of Shadows” – the first of five episodes – launched Tuesday, August 2nd and Second Union is giving away a ‘Season Pass Redeem Code’ to be used on STEAM!  The season pass will immediately unlock each new episode as they become available. The contest rules are below. In the meantime, check out the trailer!

Name your favorite episode of any Batman movie/tv series in the Batman franchise.

To enter, Tweet an answer to the statement posted above to @wearesecondu and #giveaway. To be eligible, you must be following us on Twitter as well! Only one entry per user will count toward the giveaway. At Noon ET on Monday, August 15th, one winner will be randomly chosen from the pool of eligible entries. The winner will be contacted via private message. The winner will receive a Steam download code for a Batman – The Telltale Series season pass on PC or Mac.

Here’s a first look glimpse at the Justice League Pop!s by Funko, revealed today on DC’s Join the …

Cyan, Inc. released a new game today titled Obduction for Windows and Mac on Steam. In addition, there is a …