Ever since I was young, I’ve loved the Lego video games. I still remember looking in my Easter basket in 2008 and finding Lego Star Wars: The Complete Saga tucked into the back of it. Ever since that day, I’ve played a plethora of Lego games, including Lego Indiana Jones, Lego Batman, Lego Harry Potter, and Lego Jurassic World. TT Games never fails to turn well-known films or, in some cases, series of films, into exciting and worthwhile video games. The latest example of that is Lego Star Wars: The Force Awakens, a game that not only serves as a good adaptation of one of the greatest sci-fi movies of all time, but comes with an enormous amount of side content that you don’t need to purchase separately as DLC. And that’s pretty awesome, considering the amount of games reliant on downloadable content nowadays. One example of that (and a big one, too) was last year’s Star Wars Battlefront reboot. It was a fun game, but $50 for a season pass that doesn’t tell you right away what’s going to be in it? That’s ridiculous. Lego Star Wars: The Force Awakens doesn’t do that. After completing the main game, it actually gives you more. And that’s nothing to complain about.

You get the whole galaxy to explore, and six new missions taking place before the events of The Force Awakens. There are also Gold Bricks littered throughout each planet, and a new addition: Carbonite Bricks. If you find one of these, you can take it back to the Resistance Base on D’Qar and melt it, giving you 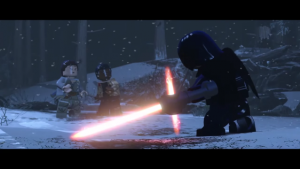 a new character to play as. So far, I’ve only melted three, and they gifted me with a Cantina Band member, Queen Amidala, and Princess Leia (Classic). There are many more, scattered around each planet to collect.

Now let’s talk about the main story, which is based off of The Force Awakens. There is actually a prologue to complete before The Force Awakens starts, taking place during the Battle of Endor in Return of the Jedi. Right away, it introduces the new Multi-Build system, in which you can build something, then rebuild it into something else entirely. It also switches up the story a bit, with Darth Vader and Luke Skywalker battling the Emperor together. After Vader kills Palpatine, and Luke removes his father’s mask, we are greeted to the smiling face of the prequels’ Anakin Skywalker. Luke shakes the helmet, and the disfigured head comes out, which he puts on his father’s torso. Jokes like that fill up the game, and it’s always great to have that comic relief during a chapter. TT Games also finds ways to replace death scenes. If you haven’t seen the movie, spoilers ahead. Instead of Kylo Ren turning his lightsaber on and killing his father, Han Solo, the two play a brief game of tug-of-war with the saber, before it turns on and sends Han falling into the smoky abyss. 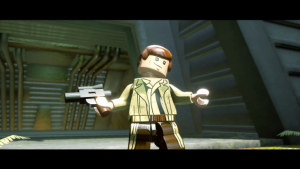 The space battles are also very well done, with stable controls, and fast-paced piloting. It really feels like you’re in the middle of the action, and I had a blast. The main game didn’t take long to complete, only about 6 hours for me, but it’s still fun, and considering it’s only based off of one movie, they did their best. I played on PS4, and didn’t encounter a single glitch throughout the game, but there was the occasional framerate drop. Considering the gameplay, story, and side content, it’s the best Lego game I’ve ever played, and if you’re a fan of either Lego or Star Wars, you’ll certainly enjoy it. I’m going to give Lego Star Wars: The Force Awakens a 9.5/10.

Check out my playthrough of the game! Lego Star Wars: The Force Awakens – Walkthrough Parts 1-6 by TheDeadlySquid