Batman has become a classic since its release in 1989, a staple in the superhero movie genre. It is directed by none other than Tim Burton, and stars Michael Keaton, Jack Nicholson, and Kim Basinger. The film follows the Caped Crusader as he battles Gotham City’s first supervillain: The Joker.

Now, forget the Dark Knight being the star of the movie. Jack Nicholson steals the show as Joker, owning every scene he’s in with corny one-liners and a homicidal sense of humor. Michael Keaton also does very well, not just as Batman, but as Bruce Wayne, too. Kim Basinger wasn’t bad as Vicki Vale, but I didn’t like how her character was screaming constantly. 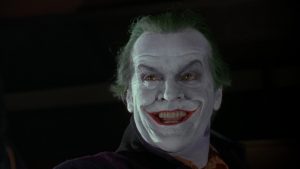 Danny Elfman does a wonderful job as the composer for Batman‘s score. I have the soundtrack for Batman and its sequel, Batman Returns, and Elfman’s music brings a dark and creepy tone to Tim Burton’s already gothic atmosphere. “The Batman Theme” is one of the best pieces I’ve heard in a film, and one of the best main themes, too. Prince also worked on the film, and wrote/performed songs for this movie’s soundtrack. Now, this movie has many great moments. The “Axis Chemicals” shootout was fast-paced and awesome. The art museum scene, accompanied by Prince’s “Partyman”, is an upbeat and fun scene. And the balloon parade, also with a Prince song, “Trust”, is a cool scene to watch, considering Joker’s funny balloons and the entrance of the Batwing. The fight scenes are choreographed well, and bring Batman’s badassery to the screen with ease.

Now, let’s talk about what I don’t like: the script. It is not good. At all. It definitely makes for some awkwardness between the characters, and obviously, that isn’t a good thing. It does have some funny quotes, though, the majority coming from the Joker. I also did not like the character of Alexander Knox. To me, he just felt like the under-appreciated, annoying guy who says crap like “Can I have a grant?” (which he actually said, by the way), and I felt as a character, he was kind of unnecessary to the story. He’s not in any of the comics, so the filmmakers could’ve avoided him, but they added him anyway. There were some other weaker characters, but I’m not going to waste time talking about them.

Overall, the movie is very good, has great characters and is a classic superhero film. But it suffers from a bad script, and some poorly done characters. Tim Burton’s Batman earns a B from me.

At the world premiere of Titans, held in conjunction with New York Comic-Con, DC UNIVERSE unveiled a new trailer for the …