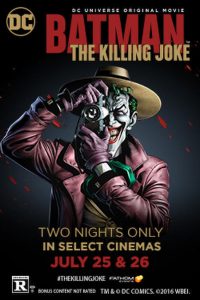 If I had to describe this movie in one word, disappointing would be that word. Batman: The Killing Joke is the adaptation of the graphic novel of the same name, written by Alan Moore and Brian Bolland. It’s one of the greatest Batman graphic novels of all time, telling the Joker’s origins as well as a story that is key in the Batman universe. In the book, the Joker tries to prove a point to Batman that anyone can go mad. In this 75-minute adaptation, 45 of those 75 minutes actually tell the story which the movie is based upon. The other 30 minutes are spent trying to flesh out Barbara Gordon/Batgirl’s character a bit more. I can understand why they would do that, since one of the more shocking moments of the comic revolves around her, and the comic book didn’t exactly give her much to do, but the way they did it was bad. Not “so bad it’s good” bad, not “so bad it’s unwatchable” bad, just plain bad. The movie spends that first half hour objectifying her instead of fleshing out her character, and as someone who believes in equal rights, I can’t stand it. I didn’t anticipate the film as much as others, but I was excited to watch it, and when I did, I was bored out of my mind for the first half of the movie.

It isn’t until the second half of the movie that it begins to get good. The second half of the film is more faithful to the source material, and that’s obviously what I expect in an adaptation. The Joker’s short musical number near the end is just awesome, and I loved it, as brief as it was. Now, throughout the whole movie, the voice cast is spot-on. Mark Hamill kills it as the Joker. Kevin Conroy is still a very good Batman. And I actually enjoyed Tara Strong as Barbara Gordon. The animation feels a bit off, though. The frames seem disconnected and it feels choppy, and not as smooth as it could’ve been. I mean, I know it’s not 3D animation, but it still felt so rushed.

Overall, this adaptation of an acclaimed graphic novel isn’t that good. It has a fun moment here and there, the voice cast is amazing, and the film is faithful to its source material for the second half, but the Batgirl story arc was uninteresting. I’m going to give Batman: The Killing Joke a D+.

Well. What can I say? Have you started breathing properly yet? I wouldn’t be surprised if the CO2 …