Rose City Comic Con was this past weekend, and the wife and I made a day of it on Saturday. We’d never attended this particular Con before, (this is their 5th year) but we were prompted into action by the announcement that this would be one of Stan Lee‘s last appea 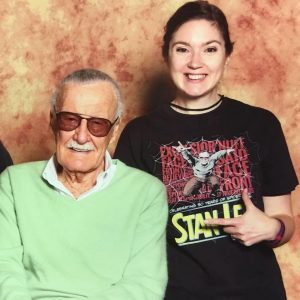 rances (and his very last at a Con in Portland). You see, we’d sat in on a Stan Lee panel a few years ago at Wizard World Portland, but didn’t spring for a photo, and for the past few years I’ve been reminded of this fact often. Needless to say, my wife got her photo!

Upon entrance, we hit the showroom floor, which included the Exhibitor’s Booths, Artist Alley, an area for Portland Retro Gaming, and a Kid’s Area where they had tables spread out, for children to do arts and crafts, entertainment like balloon art, and a large stage blasting loud music where a group of kids were dancing and letting loose! ‘Oh, and people, lots and lots of people. According to organizers, the event featured over 35,000 attendees over the course of the weekend. Artist Alley was a big draw this year, a lot of amazing well-established artists (Kevin Maguire, Dustin Nguyen, Jimmy Palmiotti, Stan Sakai) along with a large number of up-and-comers. Here are a few that stood out to us: Juniper by Carrie Potter and Sarah Thurber, Gumballs by Erin Nations and Lonnie Comics by Lonnie Mann.

My friend Brian Johnson was a first-time exhibitor at Rose City Comic Con this year. We stopped by his booth, and had a nice chat with him. It was great seeing Brian take the leap and follow his dreams, he’s an inspirational guy! Here’s what he had to say about his experience: 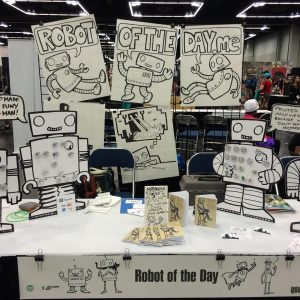 “Rose City Comic Con 2016 is over and I’m still unpacking (literally and figuratively) my experience as a first-time exhibitor in the “Artist Alley.” After a couple of years walking the aisles of the Con as a visitor, I decided that I had the right stuff to give it a go as an exhibitor in the Alley. I’m still searching for a concise way to describe the experience and the closest I’ve come to encapsulating the event is to say “it’s complicated.” The days leading up to the glorious weekend were filled with terror and elation, worry and excitement. I realized that it’s like having a child: Despite all the research I did, all the prep, no matter how ready I thoug 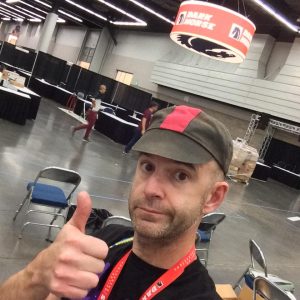 ht I was I discovered that I wasn’t really ready. During set up I kept feeling like an impostor that had somehow managed to bamboozle my way into the deep end of the talent pool. Would other exhibitors look at my booth with its hand-drawn displays and think me ridiculously outclassed? Going in I had no expectations for how well I might do, and my highest hope was to break even on my expenses. That never happened, but I was in good company! I managed to visit several other exhibitors in the Alley and the story was basically the same: As an exhibitor in the Artist Alley, Cons are a mixed bag: Some years are great, some are awful. Some items that are predicted to sell fall flat and secondary items sell out. But the one common thread binding us all together was a passion — an addiction, even — for what we were doing and a sense of shared fate. We were all in it together, and shared our successes and failures. So once Artist Alley was reduced to nothing but stacks of folded tables and a few stray bits of trash I was already hatching plans for the next Con.” 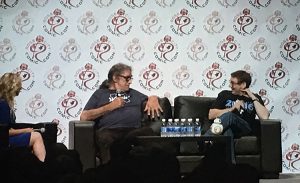 After we finished with our Stan Lee Photo Op, we made our way to one of the first of many panels held this year. We caught the tail end of John and Joan Cusack, culling stories and thoughts from their decades of combined experience in the entertainment business.  Next, we sat in on a panel with Peter Mayhew and Brian Herring. Chewbacca and BB-8 themselves! Mr. Mayhew recalled some wonderfully warm stories from his almost 40 years with Star Wars, and Brian Herring shared his experiences as a life-time Star Wars fan, and finding himself on the set surrounded by his childhood heroes. A very entertaining panel.

In our final panel we were entertained by “The Punisher” himself, Jon Bernthal. Though we were both looking forward to this panel, we were more than a little surprised at just how much we enjoyed it. Jon was warm, genuine, engaging, and funny! He didn’t come to the table with the safe, rehearsed, pat answers that so many do. He was genuine, and down to Earth, sometimes self-deprecating. It was a lot of fun. Here is a brief excerpt from the intro to the Jon Bernthal panel.

Overall, we had a great time at Rose City Comic Con! We’re already looking forward to next year! We saw old friends, made some new ones, and met a living legend. All in all, a good day! Be sure to check out our image gallery below for some amazing cosplay!