CAUTION: Major spoilers for the episode follow, along with some violent descriptions.

I am in awe right now. Batman: The Telltale Series is contending for my Game Of The Year 2016, currently tied with Far Cry Primal. This episode of Batman really solidified the series as Telltale’s best yet, and Children Of Arkham was delightfully better than its predecessor. The first thing I want to point out was that they fixed my main issue with the last episode, Realm Of Shadows: the framerate. Children Of Arkham‘s framerate was 60fps for about 85% of the episode, and I was satisfied with the upgrade.

I will say, this episode was filled with some of the greatest moments in any Batman media. The episode deals a lot with the fallout of Episode 1, mainly the reveal that Thomas and Martha Wayne, were in fact notorious crime bosses that worked with Carmine Falcone. That revelation from Ep. 1 really helped set up an outstanding second episode, one which I thoroughly enjoyed.

In this episode, there’s a lot more of everything, which is ironic, considering that Children Of Arkham is significantly shorter than Realm Of Shadows. There’s more character development, more story, and more choices that will impact the game later on. At the very end of the episode, I was given a choice that I believe was the most important and most impactful in a game, ever. The main antagonist in the episode was Oswald Cobblepot, now calling himself the Penguin. At the end of the episode, I was forced to make a split-second decision to save one of two allies: Harvey Dent or Catwoman. If I had saved Harvey from Oswald, Catwoman would’ve been shot by Penguin’s thugs, and fled the scene. I chose to save 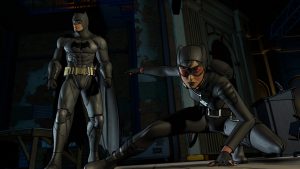 Catwoman instead, and Oswald smashed a lamp over Harvey’s face. You can probably guess what this led to.

That one choice led to the “birth” of one of the most iconic Batman villains. That was a truly shocking moment, and the fact that my decision led to his disfigurement was (in my opinion) the biggest choice I’ve ever had to make in a game, and it was incredibly nerve-racking knowing the consequence of my choice. I also want to talk about the villains introduced in this episode. Oswald Cobblepot made an appearance as a foe, but a new group of baddies was also revealed and will definitely pose a threat to Batman in the upcoming episodes. They are called the “Children Of Arkham”, and they are led by a mysterious masked man, who tells a crowd of people that they have come to “expose the corruption at root” in Gotham City. I’m not exactly sure what that means yet, but it can’t be good. Yet again, the voice acting is spot-on in Children Of Arkham. There isn’t a voice that Troy Baker cannot do, and he stuns me to the point of wondering if he’s better than Kevin Conroy’s version of the character. I think Laura Bailey also does a wonderful job as Catwoman, as does Erin Yvette as Vicki Vale.

There’s also an awesome sequence in the episode in which Bruce and Selina fight through a group of Cobblepot’s men. While littered with quick-time events, the scene is still very awesome and fun. The only problem I had with the episode was a graphical glitch in the first chapter 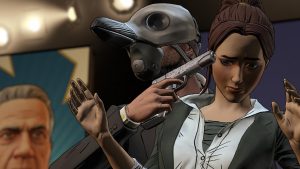 that made the experience a bit underwhelming. For the rest of the game, the graphics and animations are very smooth, but in Chapter 1, a large black blob overcomes the screen a bunch of times. I hope it gets fixed soon, as it drags the experience down a bit.

Overall, Batman: The Telltale Series is turning out to be an amazing experience, and Telltale’s masterpiece of a second episode strengthens my opinion about it. While it has a major glitch in its first chapter, the rest of the episode is immersive, and I was impressed. I just hope that Episode 3 can top it. Children Of Arkham gets a 9.5/10 from me.

Pee-Wee’s Big Adventure is the first film directed by Tim Burton and is written by the leading actor, …