Mad Father is a dark tale about a girl named Aya who struggles to save her father before it’s too late. Players must solve puzzles, survive sequenced quick time events, dodge sinister monsters, and find hidden items in order to make it to the ending Aya and her family deserves. If you miss an item or make the wrong choices, poor Aya’s fate may be worse than death.

This indie horror RPG game was originally released in Japan for free by a developer called Sen using WOLF RPG Editor. It was soon translated into English by a fan known as “vgperson“. The game is still available for free, but an updated version of the game was released for a small cost on Steam on September 23. Users on Steam who had played the free version reported that the latest version is worth the new price tag. New artwork and additions to the old storyline make the game worth playing again for those who have already played the original. Therefore, even if you have played Mad Father before, it is definitely worth it to take another look. 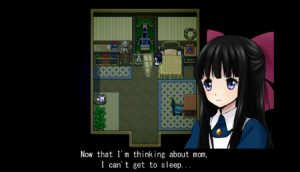 The game only takes an average of 2 and a half hours for the main story (or 4 and a half for completionists), making the game’s runtime surprisingly short. This isn’t necessarily a negative thing, however. This runtime actually felt perfect for the 2D game because it covers all of the important points in the story and allows players unlock the different endings during multiple play-throughs before it becomes tiring. There have been many times with much longer games that I wanted to play through more than once, only to become discouraged because I simply couldn’t spend hours looking at the exact same game once again. A shorter game length solves this problem completely.

Mad Father’s puzzles average an easy to normal difficulty. Many of the puzzles are laid out so that the solution can be found at a quick glance. Still, there were admittedly two or three times when I felt pretty stuck. However, Aya makes some pretty obvious hints towards a solution if you’re in the right place. There were also times when I tried to ask Aya to use certain items and became frustrated when she couldn’t, only to find out soon after that Aya will use some items without needing to use them manually from the inventory. The best example of this was when Aya needed to wear earplugs to avoid death, but the earplugs were not useable from the inventory. Thankfully, Aya was smart enough to use the earplugs on her own when she pulled out the particular item that required them to be worn. 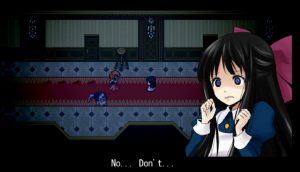 Another frustrating part of the game were the sections where undead monsters and possessed dolls needed to be dodged. The game is controlled using the keyboard and these parts of the games require almost twitch-like reflexes in order to complete. This lead to me having to redo some sections quite a few times after being just a mere second too slow. Mad Father is a game that feeds on your fears from the atmosphere and danger. But that all goes out the window when faced with the same monster over and over simply because a button was pressed half a second too late. If the monsters in these sections were just a tiny bit slower, I think the running speed would be a lot less annoying.

Looking past these trivial faults, Mad Father is a great game for this upcoming Halloween. Learning all about Aya and her strange family as she wandered through the haunted house was both thrilling and highly entertaining. If you’re looking for some quick games with a spooky theme to queue up Halloween night, be sure to place Mad Father on your wish list.

Recently DC Comics has released some stunning new iterations of some of their most popular comic book heroines. …

EverQuest Next had been in development since 2009, but it was time to tell the world more about …