I know, it’s been a while since I did my Episode 2: Children Of Arkham Review, it’s time for me to make up for that by doing reviews for the three episodes of Batman: The Telltale Series that have come out, starting with Episode 3: New World Order.

New World Order picks up with Harvey Dent, Gotham’s new mayor, in the hospital after being severely burned on the left side of his face by Penguin, aka Oswald Cobblepot. This scenario helped set up a really good episode, which I think was better than the first two. It’s hard to be a huge fan of the Caped Crusader and write these reviews, as I’ve been accustomed to multiple universes in not just comics and film, but also the Arkham games developed by Rocksteady. This episode left off on a huge cliffhanger, and I’ll discuss that later, but for now, I’ll stick to the basics. This episode has little action in it, but it has enough to satisfy me. It spends a lot of time giving you options to make impressions on characters that will affect how they think about you. Telltale is known for doing that, especially in their The Walking Dead games, but since this series heavily relies on you having allies to give you information and help you out with crimes, it’s a harder decision to make.

I like how the story plays out in this episode mainly because it forced me to make many aggressive or peaceful decisions that would affect the way others thought about me later on. In the episode, the Wayne Enterprises board is concerned about Bruce Wayne being CEO of the company, considering the recent revelation of his parents working with mob boss Carmine Falcone. Their replacement: none other than ol’ pal Oswald Cobblepot. Oswald didn’t play as integral a role as he did the previous two episodes, but nonetheless, his story is shapi 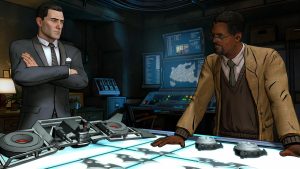 ng up to be a great one. At this point in the series, I was pretty sick of Vicki Vale. She’d barely showed up in the past two episodes, making the character appear as not much more than a mere cameo. That all came to a crashing halt in New World Order. The cliffhanger I mentioned in the beginning was the revelation that Vicki is, in fact, leader of the looming threat known to Gotham as the “Children of Arkham”. It was hinted that she was their leader earlier in this episode when a news article was published of her interviewing their leader, but I thought nothing of it. This is why I love Telltale’s games so much. They invest you from the beginning and leave you wanting more, but they also give fans of these franchises something to look forward to in the future. If Telltale ends up doing a “Season 2” of this series, I am really excited for it, and I’m only on Episode 3.

Harvey Dent is also a key player in this episode, but not in the way that you might think. On the promo poster for this episode, he is seen with the Children of Arkham’s leader and Penguin, flipping his trademark coin and grimacing. New World Order gives us a more sympathetic look at Dent than seen in films like The Dark Knight and (cough, cough) Batman For 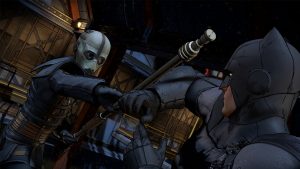 ever. In the episode, Harvey is slowly going insane, beginning to exhibit signs of a split personality. One is good; another is evil. Throughout his scenes in the episode, you can tell how much the bad side is affecting him, giving him a more growling voice and becoming rage-induced, hurling chairs at our protagonist after finding him in Selina Kyle/Catwoman’s apartment. But after he realizes what he’s done, he hurries himself out, and is deeply hurt by what he has become. He also has a mask for the disfigured side of his face now, so that’s kind of creepy. Catwoman doesn’t play as pivotal of a role as I had hoped in this episode, but nevertheless, she steals every scene she’s included in. We also get a hint of a Bruce/Selina romantic relationship in this episode, which I hope goes on the be fulfilled.

I didn’t encounter any graphical glitches in this episode, which is good, but the framerate was still pretty terrible. In the fight sequence between Batman & the leader of the Children of Arkham, the framerate dropped significantly and I wasn’t too happy about it. Their were a few brief moments throughout the episode when the framerate was a smooth 60fps, but aside from those segments, the series hasn’t made any move to change their framerate.

Story-wise, Episode 3 was more compelling than its predecessor. There was more twists, action, and overall fun to be had with New World Order. Unfortunately, its technical issues offer it no support and for that reason I’m going to give the episode the same grade I gave its predecessor – a 9.5/10.

Is Your Spider-Sense Tingling? Peter Parker is back on movie screens and that means more wall-crawling …

For “Guardians” fans, it’s not too late to pre-order Art of GotG Vol2, signed by Andy Park and members …