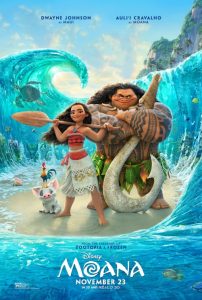 Moana is the newest film from Walt Disney Animation Studios, and I’m just going to start by saying that Frozen, the last Disney Princess film, left a pretty bad taste in my mouth. I liked the film itself, and while its story was very thin, some of the action sequences were spectacular. If I were to rate it, I would probably give it a B-. However, the overmarketing of the film and the incessant playing of “Let It Go” on the radio made me want to pull my hair out.

Moana doesn’t take that road. In fact, this is one of the best films that Disney has ever produced. It’s a great animated feature film that, in my eyes, only has one problem, which isn’t even that major. If it weren’t for that one small gripe I had with it, this would probably be the best computer-animated Disney film I’ve ever seen. It follows a young girl named Moana (Auli’i Cravalho) travels across the ocean in search of the demigod Maui (Dwayne Johnson) so that they can restore the heart of the goddess Te Fiti and bring peace to the island of Motunui, Moana’s home. I’ll be the first to admit that this is a classic Disney set-up, but fortunately, Disney’s usual inciting incident (the death of parents) is not followed through in Moana, and I, for one, am very glad. My main problem with the film is that is has a lot of the same plot clichés that Disney’s films usually do, but aside from that, this film’s a blast. After “Let It Go”, I thought Disney songs were completely ruined for me, but on the way home from the movie, I had the song “How Far I’ll Go” stuck in my head. If you plan on seeing this, good luck getting that little bugger out of your brain. The music is phenomenal and not just the vocal pieces (co-written by Hamilton’s Lin-Manuel Miranda) like “You’re Welcome” and “Shiny”, but the original score as well. Out of the three 2016 animated films I’ve seen (Kubo, Moana, and ZooTopia), this one’s probably the best.

I really enjoy the story, and while it’s set-up is just as clichéd as any other Disney film (ex: girl wants to defy the path l

aid out for her and will stop at nothing to achieve her goals), I really had a fun time with it. I also extremely enjoy the Easter eggs and references in Moana, like the Kakamora, a group of coconut pirates; their ambush on Moana and Maui is an homage to 2015’s Mad Max: Fury Road. If you’ve seen the film, you will probably get the reference. Aside from that, the computer animation is gorgeous. Every film Disney releases seems to have better animation than the last, and I didn’t think that a single film could top the luscious and extremely beautiful environments in Pixar’s 2015 film The Good Dinosaur (great film, by the way). But these water effects and explosions, oh my gosh, they are sooooo good! This is some of the most beautiful computer animation I’ve seen in my life. The film also has some very strong voice acting, considering that Auli’i Cravalho is only 16. Temuera Morrison (Jango Fett in the Star Wars prequels) also plays a minor role as Moana’s father.

Moana may not be in theaters for much longer, but if you haven’t seen it yet, I highly recommend you do before it leaves the cinemas. This is definitely one worth buying on Blu-Ray and you should check out the “Art of Moana” book as well to fully experience it’s art design. Aside from its plot clichés, this is some of Disney’s best work. I’m going to give Moana an A.

Seriously, go see this, now. I feel really guilty for missing it last year, but I’m really glad I finally viewed it. It’s also worth talking about the animated short I got to watch before Moana, called “Inner Workings” and I think that it’s one of the funniest Disney animated shorts. But it’s also oddly heartwarming and I’ll definitely keep it in mind when I purchase the film’s home release.

With the summer months fast approaching, we’ll all be looking for ways to stay cool! For many of …