Edward Scissorhands is the fourth film to be directed by Tim Burton. It stars Johnny Depp as Edward, an invention left unfinished, who is brought to a town by a kindhearted Avon saleswoman named Peg Boggs. He garners a positive reputation from the residents but those who accepted him at first begin to distrust him once he is caught doing actions that he thinks are good, but others see as wrong. Ex: Saving a boy from being hit by a car, only to be accused of hurting him for cutting the boy’s face accidentally.

As I mentioned in my review of Beetlejuice, the director does an outstanding job turning something scary at first into a hilarious experience. In Edward Scissorhands, the film is downright creepy from its o

pening titles, partially thanks to Danny Elfman’s tremendous score, but that all changes once Edward is brought to the town. His appearance is very funny, considering he’s lived in seclusion and knows nothing about the outside world. Whether it’s eating peas or getting dressed, or sleeping in a water bed, Edward’s actions always end up making me laugh. The film takes a darker turn near its end scenes, but the majority of the film is funny, in a weird way.

One of the best parts of the movie is its scenery. One of my favorite parts of film altogether is set design, and while some of Tim Burton’s other movies don’t have the best sets, this one has some really stellar ones. Take Edward’s gothic castle, for example, Its interior and exterior are visually beautiful and helps you connect with the character of Edward; a lonely, heartfelt creation left unfinished.

Out of the films by Tim Burton that I have viewed (I still have yet to see Planet of the Apes, Dark Shadows, and Big Eyes), Edward Scissorhands is much more heartfelt and emotional than some of his others, like Batman and Beetlejuice, and that just makes it way better than nearly all of his movies. I don’t believe it’s his best work, but when you give the guy the right material, he can do some great stuff. And, don’t get me wrong, I love some of his other movies that aren’t as deep, like the ones I mentioned above. I just think that when Burton breaks away from his signature style of freak-show weirdness, it makes for an extremely more compelling experience than some of his more formulaic movies. A great example of that is Ed Wood, which is my next 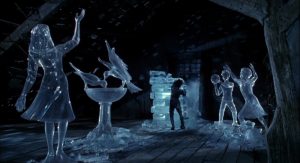 I do have one big problem with Edward Scissorhands, and when I watched this film as an 8-year-old kid, it went over my head. But over time it’s annoyed the hell out of me, and it’s the character of Kim (Winona Ryder), the daughter of Peg Boggs. When we’re introduced to her, she’s initially afraid of Edward, who accidentally cuts a bunch of holes in her bed, spraying water everywhere. But when she sees him on a talk show, she suddenly gets all defensive when her boyfriend makes fun of him. And then after the final confrontation, Edward and Kim kiss? What? I hate when character development is rushed, and for the emotions shared between the two, it’s so underdeveloped.

Edward Scissorhands isn’t Tim Burton’s best work, and it has a huge problem that I hate every time I watch it, but it’s a heartfelt and deep experience that made me cry when I re-watched it. I’m going to give Edward Scissorhands an A.

Fox has released the final trailer for the highly anticipated film Logan today. (It even appears in our …