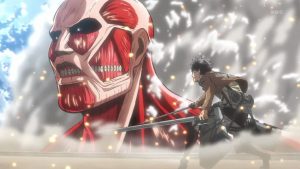 most violent and disturbing anime of all time, but behind the blood & gore is a truly incredible story that doesn’t just appeal to anime fans.

For those new to the story, here’s a little bit of background: In the future, enormous Titans appeared. Forced to retreat, the humans built three 50-foot walls to protect themselves and the village: Wall Maria, Rose, and Sheena. One day, two new “breeds” of Titan appear: the Colossal Titan, and the Armored Titan. They smash Wall Maria, allowing Titans to overtake the districts and eat the villagers inside. Eren Jaeger, a teenager living in Shiganshina District, is there when the Titans break through, and watches in horror as his mother is eaten. Along with his foster sister Mikasa Ackerman, (whose parents were killed by slave traders) and his friend Armin Arlert, he joins the Survey Corps and vows to kill every last Titan.

First off, let me say this: the animation in this series is absolutely stunning. The environments (especially the forests) are really beautiful, and definitely add some color to the bland hues that make up the districts. The fight scenes are so exhilarating, and truly took my breath away. Every piece of this animation is crafted in such a unique way, and I love it. Another thing I’d like to add is, if you’re interested in watching this, don’t watch more than two or three episodes a day. It’s one of those shows that gets really fatiguing and boring if you watch too much at once. 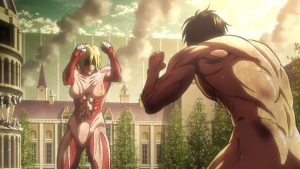 Attack On Titan has some problems with character development. While Eren, Mikasa, and Armin get plenty of screen-time and background, some other major characters like Levi and Annie don’t get as much. Considering the huge reveal at the end pertains to Annie, it was a bit jarring to not know more about her character. Maybe we’ll get some more info in Season Two, which is set to release in April. Aside from that, I think the series gives viewers way too many members of the Scout Regiment, and the focus is lost trying to figure out who’s who. That doesn’t overshadow the background and development of Eren, Mikasa, and Armin. I really enjoy how the series focuses a lot of attention on Mikasa, which I really like. Instead of making Eren the extremely agile and envied lead character, Mikasa is shown to be better than Eren in pretty much every category. She’s the best character in the series because of the large amount of development she has, heads and tails over Eren. She’s the main face in the ending credits, too! I also really enjoy the music. It adds a great amount of drama to the series, especially during deaths and revelations. I’m not exactly sure why they used a new theme song for the second half of the series, because I like the first theme way more than the second.

As far as anime goes, Attack On Titan is one of the best. While it suffers from character development problems, and some subplots that aren’t that interesting, but overall, it works on a lot of levels, and the animation is very good. I’m going to give Attack On Titan an A-.

There is a phrase that goes around at comic cons: “Marvel movies are made by fanboys, DC movies …

The first Deadpool 2 Teaser Trailer has arrived, in the form of a surreal homage to the late, …