Hello, everyone, and welcome to another anime review! Today we’ll be taking a look at the new anime series from ONE, creator of One-Punch Man: Mob Psycho 100. It follows a middle school psychic named Shigeo Kageyama (known as “Mob”), who works for a phony psychic named Arataka Reigen. Over the course of the show, Mob battles and exorcises many spirits, and tries to balance his life as a middle-schooler. From the opening scene of Episode One, I knew I was in for a wild (and weird) ride. I don’t know what was going through the animators’ heads when they did this show, but if you end up checking it out, you’ll know what I mean.

I’ve probably never seen an anime series as weird as this. Even the opening credits are filled to the brim with seizure-inducing lights and music, accompanied by crazy creatures and faces. I really love Mob Psycho 100, and while it feels to me like a rehash of nearly every anime out there, it’s super fun to watch and it’s very enjoyable. Once the second episode begins, that’s when it truly begins to embrace those anime clichés we all know, it gets a little bit repetitive. And I’m not joking about the intro. That minute and a half could screw your eyes up for life. 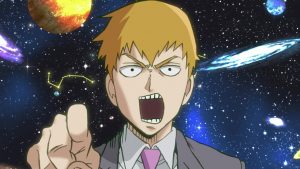 The character development in Mob Psycho 100 is spot-on. It effectively gives characters the background they deserve, like Mob’s brother Ritsu. Ritsu is an extremely interesting character to me because unlike Mob, Ritsu initially doesn’t know he has powers until the seventh episode. He uses his powers for fun, while his brother uses them to exorcise spirits and to help people. I also really like Reigen. Since he’s not actually a psychic and doesn’t have any powers, it’s always super hilarious to watch him fail at hurting these entities. His main mode of attack involves throwing table salt at his enemies.

One thing I enjoy about the series altogether is its brilliant neo-aesthetic, along with the fact that it doesn’t take itself very seriously. I love the vivid colors used in the series, and the designs of the creatures are so funny. A great example of that is Dimple, who makes an appearance in Episode 3 as a human, but is exorcised. His spirit is a small, green, balloon-shaped thing, with pink spots on his cheeks and tiny arms. Another really awes 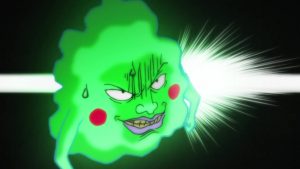 ome feature about this anime is its action scenes. I get that some of these may seem really over-the-top, and I’ll be the first to admit that they indeed are. But that’s what makes them damn great to watch. Seeing two “espers” dueling it out or a psychedelic planet being broken by an enormous lamprey-thing is really, really cool.

There are quite a few problems with this show, and my big gripe was that the series constantly makes you believe something and then immediately goes back on it. Whether it’s the supposed death of a character or the “reveal” that a lead was actually a villain the whole time, the show is always throwing these plot points in your face, and I hated it. I believed the main character was dead when the final episode started, but, low and behold, they were revealed to be alive! Another problem is its story. The first few episodes offer some fun to be had and great introductions of the characters, which certainly isn’t bad at all, but there really isn’t a story until the last third of the show. While the first two-thirds were, like I mentioned before, really good, I didn’t like the lack of a real plot.

Aside from that, the show is great. It’s funny, interesting, and even though it lacks a story, there’s a great amount of fun to be had with Mob Psycho 100. I’m going to give the show an A-.

With Spring still almost two months away, the winter months for a lot of us are all about …