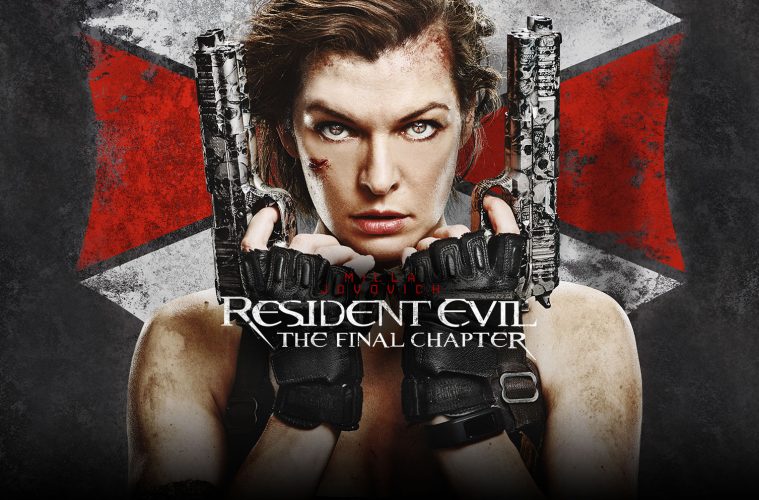 For fans of the film franchise, Resident Evil: The Final Chapter offers a satisfying conclusion to disjointed storytelling and lack of transition between chapters. When we last left Alice, she was injected with the T-virus, bonding with the disease (for a second time) and becoming the ultimate weapon. On the roof of The White House, Wesker explained the Red Queen was trying to wipe out humanity, and all of the remaining uninfected were in the base; humanity’s last stand. A pull-away showed the military defending the White House alongside the remaining Umbrella Corp. soldiers against enormous hordes of T-virus abominations swarming all over the walls.

The best part of the sixth and final movie in the Resident Evil franchise is the opening recap summarizing the motives of Dr. Alexander Isaacs and the origin of the T-virus, putting the former five movies in the Resident Evil franchise into coherency. This is followed by Alice digging herself out of the rubble of Washington D.C., with no explanation of the events that followed the conclusion of the prior movie, suggesting everyone — including Wesker and the remaining uninfected — died in a final stand. This is not the first time the franchise jumped ahead a few hours and leave us questioning what happened in between. It would later be explained in this film that the remaining surviving humans, uninfected, are spread across the globe and due to be infected within 48 hours. By this time such a plot hole contradicting the facts established in a prior installment is not unexpected. Rather than map out the storyline in advance for potential sequels, the plots for each installment were made up as they went along and plot holes were ultimately created. 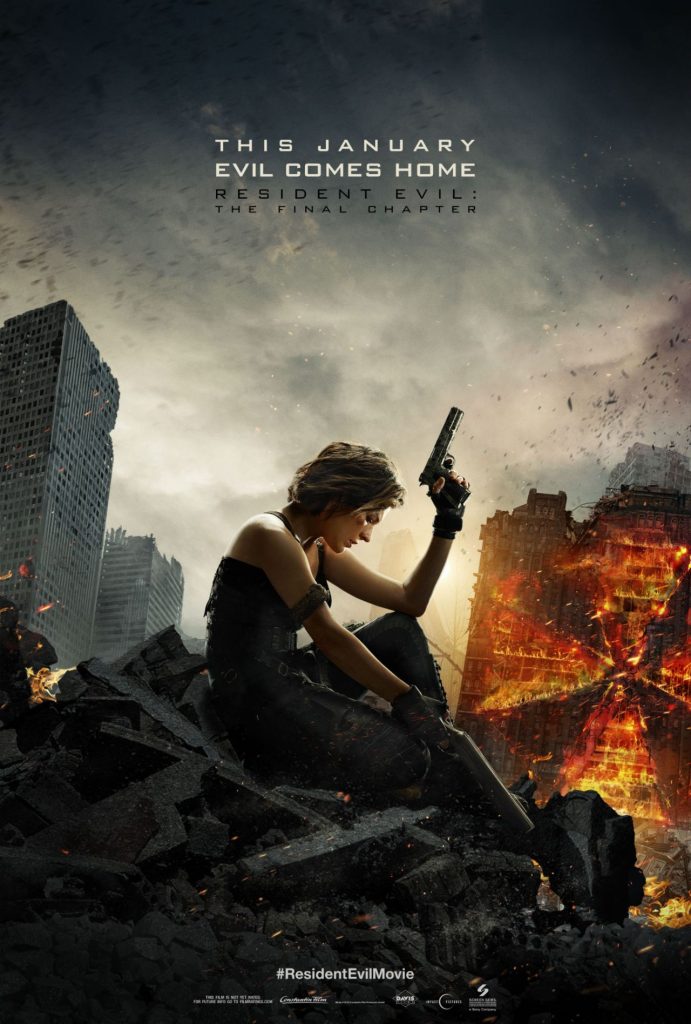 In the third installment, Extinction, Alice explains that all of the rivers and lakes dried up and the forests died and the entire world was one big desert wasteland. So why did the next movie contain forests and rivers? In Retribution, Wesker survived a bomb that could wipe out half of a country and no explanation was given regarding how he survived. (We can only “assume” he was a clone.) In Afterlife, Wesker injected Alice with a serum that cured her of the T-virus, taking away her powers and making her human, only to survive a plane crash 20 minutes later. Then at the conclusion of Retribution, she is injected with the disease again. My biggest issue stems from characters in the franchise who were dropped with no explanation or resolution.

This might explain why the first three movies displayed attention to detail and plotting, with the fourth and fifth film becoming brainless cash-ins. The producers could not make up their minds if they wanted Alice to have powers, or whether they don’t. The fifth film had Alice and another group of renegades attempting to stop the Red Queen (destroyed in the first movie and the same that was replaced by the White Queen in the third movie) and now work in cahoots with the Red Queen (apparently still alive and well) in this final installment.

Returning to Raccoon City where the events of the first film took place, Alice and another band of renegades now lead one final strike against the Umbrella Corporation. The sole survivors of the human race (including Ali Larter who seems to be mingling with yet another group of renegade survivors) will be extinct in 48 hours because the T-virus has finally spread across the entire globe… unless Alice succeeds where she failed in the prior five installments. Alice and her new friends face off against the same threats that she encountered in the first movie… including monster dogs and the hallway consisting of flesh-slicing lasers.

The first movie of the franchise is one of the ten best zombie movies made and a lot of fun to watch. Paul Anderson was responsible for writing and directing the first film, then focused on writing the screenplays for the second and third films in the franchise, then took over the directing for the fourth, fifth and final chapters. Many fans of the franchise joke that the series went downhill as soon as Anderson got infatuated with Jovovich and started to make all the other movies about her instead. (Which might explain why she has to open each movie with narration reminding us who she is: “My name is Alice…”) Anderson’s and Jovovich’s final vanity project attempts to get back on track by closing any gaps in the storyline, resolving the on-going battle between Alice and the Umbrella corporation… with a satisfactory ending to this particular franchise.

Sadly, the final chapter fails to reveal Albert Wesker’s true intentions, which was suggested during the final moments of the last movie. Here, he is merely shot and killed. End of the Wesker subplot. The Umbrella Corporation’s endgame is revealed but does not make sense. Why capture human survivors on board a vessel off the west coast in a prior movie if they had no need of them? Sadly, we will never know. Milla Jovovich’s pregnancy, and the studio’s indecision of whether one or two additional sequels would be produced, delayed production of this movie by more than a year. One stunt woman was seriously injured and will suffer permanent injuries for the rest of her life. Another member of the production crew was killed. With all that plagued the production of this final chapter, it may be just as well that the action comes to a close.

Anderson may have one of the lowest approval ratings on RottenTomatoes.com and cashed in on a franchise that generated a billion dollars in worldwide revenue, but he and actress wife Jovovich are laughing all the way to the bank. I never thought I would be pleased to see an end to a film franchise that I kept rushing to the theaters on opening day weekend with each installment, temporarily applying suspension-of-disbelief and ignoring plot holes. My hope is that Resident Evil returns as a television mini-series where it rightfully belongs.

Official Synopsis: On the eve of D-Day, US paratroopers drop behind enemy lines, to infiltrate a small village. Unfortunately, they …

Every Sunday evening, intrepid reporter RJ delivers a wrap up of the most important news items from the …