The Nintendo Switch is finally here! Nintendo fans around the world are spending most of this weekend with their new console. I am one of those fans who has barely put the Switch down since it arrived home on Friday. Even the time spent going through the menus to share images or taking a peek at my Nintendo Switch profile has been an enjoyable experience so far. Nintendo really put a lot of love and extra attention into this new console.

Setting up the Switch for the first time was incredibly easy. I am the type of person who usually prefers that other members of the household work with the wires behind the TV. I am much better at setting up computers than I am with televisions, you see. However, Nintendo made set-up incredibly easy to understand with their adorable user guides which can be found when setting up the Switch for the first time or checking the News application. I was surprised to see that the Switch had a lot of battery power already, but I still chose to charge the Switch to full like most new devices. The Joy-Con that came with the Switch were charged fully and the separate Joy-Con that were purchased separately also arrived ready to go out of the box. I was playing The Legend of Zelda: Breath of the Wild with my Switch in its dock within a few short minutes. The Switch owners who decide to forego the dock station set-up will be able to start enjoying their new console straight out of the box.

Although I do still enjoy it, the handheld mode is currently my least favourite way to play games. After playing other handhelds such as the Nintendo 3DS XL or PlayStation Vita, the Switch feels as though my hands are spread very far apart due to the Switch’s wide screen. Additionally, the Switch’s weight is mostly resting on the palms of my hands and this can become uncomfortable after a while. I definitely prefer playing games with the Switch resting on a table or docked to the TV for long play sessions. Still, handheld mode is great for times when I want to take a break from my glasses (I’m near-sighted) or want to fit in a quick game before doing something else. I also prefer handheld mode when I’m sharing screenshots to Facebook or Twitter. It is much easier to use the Switch’s touchscreen to type than use the controllers to select each letter. 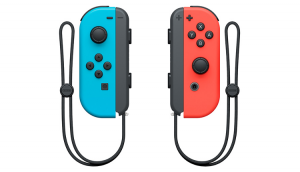 The Joy-Con themselves truly are a joy to use. I have tried them attached to the console in handheld mode, separately with one in each hand, attached to the included Joy-Con grip, and horizontally for 2-player games (both with and without the strap attachment). No matter what way I hold the controllers, they feel quite comfortable in my hands. Naturally, my hands are smaller than my boyfriend’s, so he has found that the controllers are not quite as comfortable for him when playing horizontally. However, once he used the strap attachment the controller became much more comfortable. The attachment slides right onto the controller and it provides something a bit more substantial to hold onto. It can also make the top SL and SR buttons easier to locate and push. So far, we haven’t had trouble keeping the two sets of Joy-Con charged. Each Joy-Con is estimated to last roughly 20 hours. However, we currently do not have a way to charge both sets at the same time and that could cause problems in the future. The only way we can charge our Joy-Con right now is to attach them to the console while it is docked. When playing in docked mode, one set is used for playing while the other set is on the Switch and charging. One way to solve this issue may be to use a charging grip for the Joy-Con in play while the other set charges as they do now with the dock. Another option is to purchase a battery pack accessory much like the portable ones used to recharge mobile phones and plug that into a Joy-Con charger grip. Still, none of the Joy-Con have run low on battery life so far, so the lack of charging options has not affected us very negatively yet.

The Switch console itself has also not required recharging during the few days I’ve had it. I change between docked and handheld mode enough that the Switch is always sitting around 80% to 90% battery life, so the docked charging has been very convenient for me. I will be taking the Switch outside of the home later this afternoon and I am interested to see how long the battery life actually lasts. For long play sessions away from home, I have the option to detach the AC adapter from the dock and use that to charge the Switch while on the go. Nonetheless, I do not see this as necessary for shorter play sessions though because the console battery is reported as lasting for 2 1/2 to 6 hours depending on the game. Additionally, brightness settings, internet connectivity, and the game being played each have an affect on battery life. By setting the brightness to the lowest setting and putting the Switch in airplane mode, users can squeeze out a bit more life to play a bit longer. 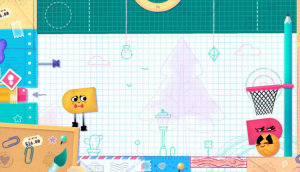 The current game selection at launch is satisfying my needs right now. I have purchased The Legend of Zelda: Breath of the Wild, I Am Setsuna, and Snipperclips and I plan to purchase more games once I get through those initial 3. Zelda is played using a game cartridge while Setsuna and Snipperclips have been stored on a 64GB microSD card. All of my screenshots are set to be saved to the microSD as well. So far, I have 25.8GB of the system memory remaining while the microSD card has 55.5. I would have preferred to have purchased an I Am Setsuna game cartridge to save storage space, but it is not available in North America. Currently, I plan on purchasing game cartridges for larger games and the smaller, bite-sized games from the eShop. I usually prefer digital downloads and my numerous SD cards dedicated solely to my Nintendo 3DS XL prove that. However, I don’t intend to fill microSD cards with games this time, so I have purchased a cartridge case which stores up to 24 games so they can still be portable. The hard shell case I purchased also has 5 slots for games, providing me with yet another portable storage option.

I have not experienced any Joy-Con desyncing, dead screen pixels, system errors, or other issues being reported. Furthermore, playing the Switch in desktop mode has not produced any frustration towards the supposedly useless kickstand so long as it is used on a flat surface. I do wish that the kickstand allowed for more than one viewing angle, but that can be easily remedied with an off-brand kickstand accessory. One issue I do have that I have not found a solution for yet is the border when playing on the TV. I can make the screen smaller using the Switch’s settings, but I cannot make it bigger to fit the TV screen. I imagine that this can be fixed by changing the TV’s settings, but I have not had a chance to fiddle with the numerous settings. I am concerned that when I do finally get games to fill the entire TV screen, there will be a loss in visual quality. It is bound to happen when an image is stretched out further than it is meant to. I am surprised that I could not find an option within the Switch’s menu to fix the problem. Still, the border issue does not have a great impact on how much I enjoy games. It is just a little annoyance that I know I can fix if I take the time to figure it out.

Overall, I am very happy with my purchase. My experience has been very positive and I am looking forward to Nintendo’s plans for the Switch in the future. I am especially excited to see which character-themed Joy-Con Nintendo comes up with first. I also plan to start collecting Amiibo figurines for the first time after hearing that even the Animal Crossing Amiibo cards have been surprisingly useful for players in The Legend of Zelda: Breath of the Wild, a completely unrelated game. Things are finally looking up for Nintendo!

If you want to follow some of my Nintendo Switch adventures, I have been filming little videos with my phone for Instagram (as seen below) as well as posting screenshots taken in-game on Twitter. My username on both social media sites is EmOfSecondUnion. Come follow me and join the fun!

A new patch for Overwatch is now live on Windows PC, PlayStation 4, and Xbox One. A new map …

Atlus has stated that there are several rules which must be followed when sharing Persona 5 content. Such rules …