Ed Wood is one of Tim Burton’s most critically acclaimed films and stars Johnny Depp as a real-life filmmaker named Ed Wood, who was, and still is considered the worst director of all time. Responsible for films like Plan 9 From Outer Space, Glen or Glenda, and Bride of the Monster, 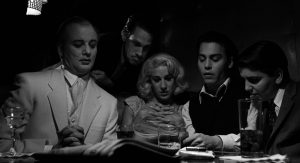 the film is about his life and work. The film has some pretty big stars, including Martin Landau (who won an Academy Award for his performance), Sarah Jessica Parker, and Bill Murray.

The film opens with a brief opening monologue and the cast members’ names on gravestones during the opening credits. I love the way this film’s style is conveyed, through a black & white aesthetic and a hilariously creepy vibe. I mentioned this film in my Edward Scissorhands review, and I said that when Tim Burton gets the right material and breaks away from his signature style, his films tend to be really amazing. This movie is such a great example of this. It doesn’t have as much action as Batman, as much humor as Beetlejuice, or enough emotional complexity as Edward Scissorhands, but it works because it’s a film about film, and it’s very interesting to see Wood’s struggle with making movies that people enjoy. I love the acting from Depp, Landau, Murray, and Parker, and the way that they breathe life into real people on screen. 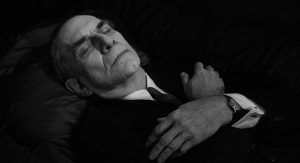 I certainly would not agree that this is the best film Burton’s ever made, but it sure is one of his best. By telling the story of a man who is misunderstood and constantly fails at what he believes is his life’s purpose, he creates a very entertaining, funny film that conveys a message and is as close to “supernatural” as gore is to a G-rated film. The dialogue is also very well written, and, while not as strong as some of his other films, it goes to show that sometimes “based-on-a-true-story” films can be considerably impressive, along with being funny and (surprisingly) intriguing.

I don’t like the way that the “story” is treated. I like a good comedy film and all, but this is supposed to be more of a serious film. That doesn’t mean it can’t have funny and weird elements. I just would rather it be treated like it actually happened.

Aside from that minor gripe, I didn’t really have any problems with Ed Wood. I love the way Burton treats the chronicle of this man’s life, and while it is way more comedic than it has to/should be, it’s still an entertaining and well-done movie. I’m going to give Ed Wood an A.

Welcome back to another recap of iZombie! Today, I’ll be recapping Episode 3 – “Eat, Pray, Liv”. – …