Hmm…*checks Adventure Time watch* only eleven more Tim Burton movie reviews to go after this one. If you’ve been following my reviews, you

know that one of the many things I write about is “previously released” movies. I have a couple “series” going right now, and one of them is reviews for each and every movie directed by Tim Burton. So, without further ado, here’s my review of the 1999 film Sleepy Hollow!

Sleepy Hollow is based on the classic Washington Irving tale and follows a detective named Ichabod Crane, who is sent to the town of Sleepy Hollow to investigate a series of murders in which the victims are found decapitated. He discovers that the town is haunted by the mysterious Headless Horsema 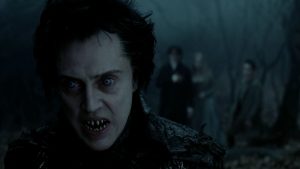 n, a headless apparition that rides a black horse. This film definitely earns a place in my top 10 Burton films. It is really good. Not only is it well-acted and has moderately good writing, but the action is fun to watch and the story is a unique take on the classic story. Let’s review.

The acting is pretty darn good from cast members Johnny Depp, Christina Ricci, and even the creepy (and awesome) Christopher Walken, who nails every scene he’s in. I mean, those teeth are freaky. But the development of their characters is also done super well and makes each character much easier to empathize with. You feel for almost every victim killed by the Horseman, especially the little boy. The costume design, by the amazing Colleen Atwood, is impeccable. I love her work on Burton’s films, and this is some of her best.

The writing, like I said before, is just moderately good. Burton’s films have had better, but the screenplay for S 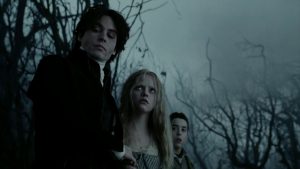 leepy Hollow isn’t terrible. It handles all of the twists and turns necessary for a horror film well, and makes Depp’s character likable. You can get behind him and feel for him because of his past, and that’s good. The slower parts in the film could’ve been written a little better, but it’s not bad overall. There’s quite a bit of action in Sleepy Hollow, and all of it is great. Seeing the original story’s well-known villain come to life and be depicted in such an epic way makes the slicin’ and dicin’ of heads even more awesome than it initially would be. The frightening appearance of Christopher Walken’s Hessian warrior near the end is even cooler, and the creep factor is high.

The story is very unique, and while it seems initially like an 1800’s version of Wes Craven’s Scream, it successfully separates itself from more modern slasher films. I love the storyline in this film, and the creepy supernatural elements make for a highly compelling experience. I won’t spoil anything, but only because this is a film that takes quite a while to explain.

Overall, Sleepy Hollow is one of Tim Burton’s best films. It’s creepy, complex, and fun to watch, but the writing and acting are great. If you want to watch a fun and weird horror film, this might be for you. I’m going to give Sleepy Hollow an A-.

The Arrowverse has a new hero…and she looks amazing. The CW gave us our first glimpse of actress …