Funcom’s The Secret World is an MMORPG in which the old occult forces run rampant in the modern-day world. When the game was originally launched on July 3, 2012, it used a buy-to-play business model and featured an optional subscription with special perks. The game will be turning 5 years old this summer and Funcom wants to give the game a big makeover. A huge overall, a new name, and a new business model will allow The Secret World will begin its 6th year of life with a very loud bang.

The game is being renamed Secret World Legends and it will be completely free-to-play (F2P). Funcom has promised that players will be able to earn everything in the game without spending a single dime. Additionally, all of the game’s content will be free, whether it arrived in the past, 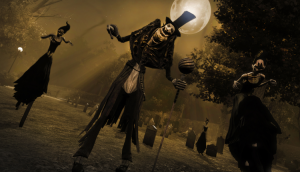 present, or future. Each free account will only be granted one character slot, therefore players must purchase additional slots in order to play multiple characters. However, if Funcom continues to stick with the current class-less and level-free concept, having only one character slot as a free player may not be so bad.

The game’s changes include updates to combat, character progression, and visuals. Many reviewers of The Secret World have stated that they feel many of the weapons and animations are a clunky, unsatisfying mess. Some players managed to find weapons that had more smoothness to them, which allowed them to enjoy the great story. Therefore, a big revamp of the combat system may be the one thing that will draw old fans back in. Additionally, the official Secret World Legends reveal states there will be “over 100 hours of mature storytelling and surprises”. This could mean that the MMO might wind up having some the darkest quests and characters which cannot be found anywhere else.

A large overhaul of Final Fantasy XIV saved Square Enix’s excellent fantasy MMO from shutting down. Perhaps it can do the same for Funcom’s MMO and help obtain some brand new fans.

Blizzard Entertainment unveiled a highly entertaining trailer during today’s Heroes of the Storm live stream. The trailer revealed that D.Va …