Welcome to my recap of Riverdale‘s tenth episode. Be warned: Spoilers Ahead! 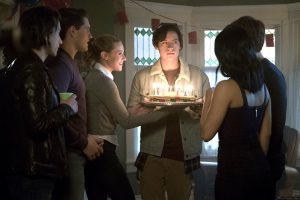 So, it’s Jughead’s birthday. Of course, all of his friends want to throw him a huge party. However, when Betty talks to Jughead’s dad, he says that he hates his birthday, and has never had a party before in his life. Obviously, that just makes Betty more insistent on throwing her boyfriend a surprise party, but things don’t go as planned. Of course.

From the teaser at the end of last week’s episode, it seemed as if there was going to be a lot going on between characters emotionally. After sitting through the episode, I can say that there was, but not in the way I expected. I’ve been with this show since the beginning, and it has always intrigued me. But lately, it’s started to go down in quality — big-time. The episode had a great setup, and my hype was raised instantly with the addition of Archie’s mom (Molly Ringwald) in the teasers. I was really excited to see the Breakfast Club actress in the show, but, as per usual, we only get to see what’s in the teasers. The dialogue she gets in the teasers? That’s the only piece of anything she gets in this episode. I can understand the series’ reasoning for doing this, but it really annoyed me.

We also got a pretty “epic” dance-off between Cheryl and Veronica. I’m just going to come right out and say it, the scene was awesome. And then, after the vast majority votes for Veronica, Cheryl ends up firing two squadmates for not voting at all. Also, the greatest line in all of TV came out of this scene. “Shoo, bitches!”

Veronica got some hefty plot points this week, involving her father, Hiram Lodge. She realizes that her father’s imprisonment may have been thanks to Clifford Blossom. She ended up getting pretty emotional and snotty at Jug’s party but was comforted by Archie. 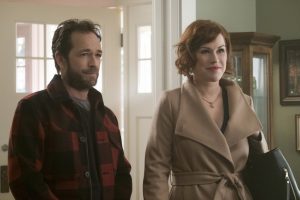 Having Chuck show up in this episode wasn’t that great of an idea. It’s not that it wouldn’t have been interesting if the show did it right, but the character had so little to do and his presence heavily relied on flashbacks to convey his ideas and motives for helping Cheryl crash Jughead’s birthday party. Having Valerie show up wasn’t that great either. Even though her appearance was supposed to be emotional, it just didn’t work, and her throwing beer in Archie’s face was more comedic to me than sad. However, the way Jughead’s hate for his birthday was conveyed was interesting. I didn’t feel the emotion viewers were expected to, but it was overall a unique reason why he didn’t like celebrating his birthday. The storytelling was a bit disjointed this week, but it all tied up nicely in the end. Veronica and Archie end up making out, and Archie’s parents arrive home after Jug and Archie clean up.

Overall, this episode suffered from storytelling and pacing issues, but had its moments and was overall not a terrible watch. “The Lost Weekend” gets a 6.5/10.