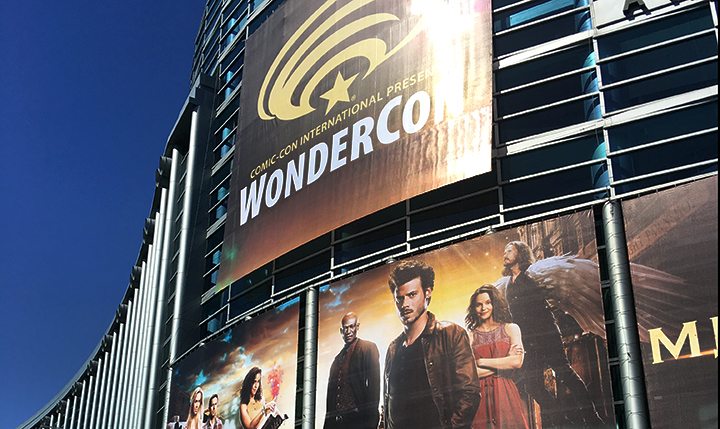 Three weekends ago in Anaheim, California over 60,000 people gathered to attend Wondercon, the sister Convention of San Diego Comic-Con. WonderCon is an annual convention hosting everything from TV/Films panels and celebrity autographs sessions to pop culture exhibitors and comic book artists and illustrators. It is a convention for anyone that loves all things movie, television, comics, art and cosplay.

This year’s WonderCon hosted a few large panel sessions in television and film. Among them were NBC’s Midnight, Texas, Fox’s Prison Break and APB, the WB’s Time After Time, Riverdale, Lucifer, and Gotham. On Saturday, the audience viewed two non-publicized clips of the upcoming summer blockbuster, Wonder Woman (In theater June 2nd, 2017) and then participated in a Q&A with Director, Patty Jenkins. During the Saturday afternoon Warner Bros. panel block, there was a full not yet released trailer shown of the August release horror film, Annabelle: Creation.

At WonderCon, there was plenty of “First-to-See” moments. The not yet aired latest episode of Riverdale was shown before its panel. The pilot episode of Prison Break was shown before its panel and network airing on April 4th, the commercial-free pilot episode of the highly anticipated show, Midnight Texas (Premieres on July 23rd) and a never-before-seen episode of iZombie. On Sunday, I viewed an all new episode of Teen Titans Go! and watched the latest WB/s Animated Movie, Teen Titans: The Judas Contract with a Q&A after the movie. ABC’s Marvel’s Agents of S.H.I.E.L.D., both Netflix’s series, Trollhunters and Voltron: Legendary Defender had a presence too. And the panel audience watched DC Super Hero Girls: Intergalactic Games, the second full-length feature film spotlighting this worldwide franchise sensation. After the panel, if you pulled a WB wristband from the morning lottery, you won an autograph session with the cast!

There were lots of little gem panels which made it so hard to choose between the big or little panels. Like, Star Trek: The Next 50 years, Spot Light on Jim Lee, and Jack Kirby Tribute. 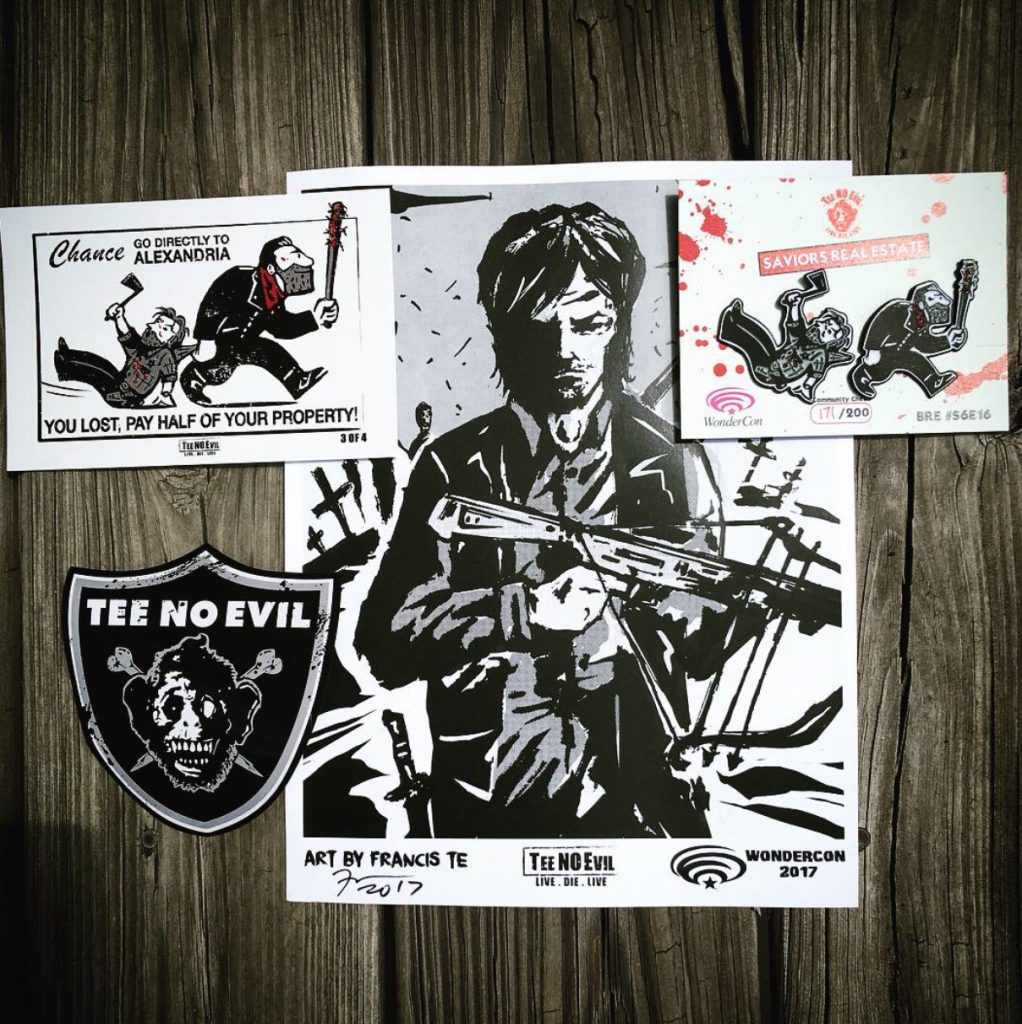 And if panels aren’t enough, then one was sure to find entertainment in the Exhibit Hall. There you’d find goods and services from many different exhibitors. The Exhibit Hall also includes Artists’ Alley, Small Press, and Fan Tables. Shout out to Nerd Kung Fu on their Booth 1909 display. One of my favorite booths this year was Booth 2129 – Tee No Evil where they offered a limited edition 2 pin set – pins limited to only 200. They had new tees to offer too. Such a great pair of guys. Can’t wait to see what they will be creating for their next Con exhibit. 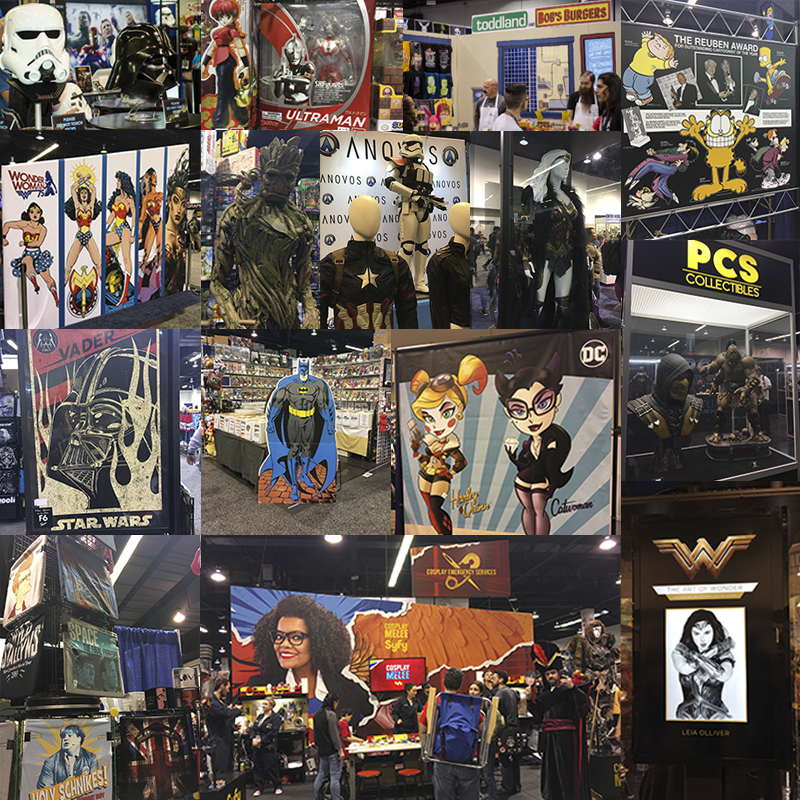 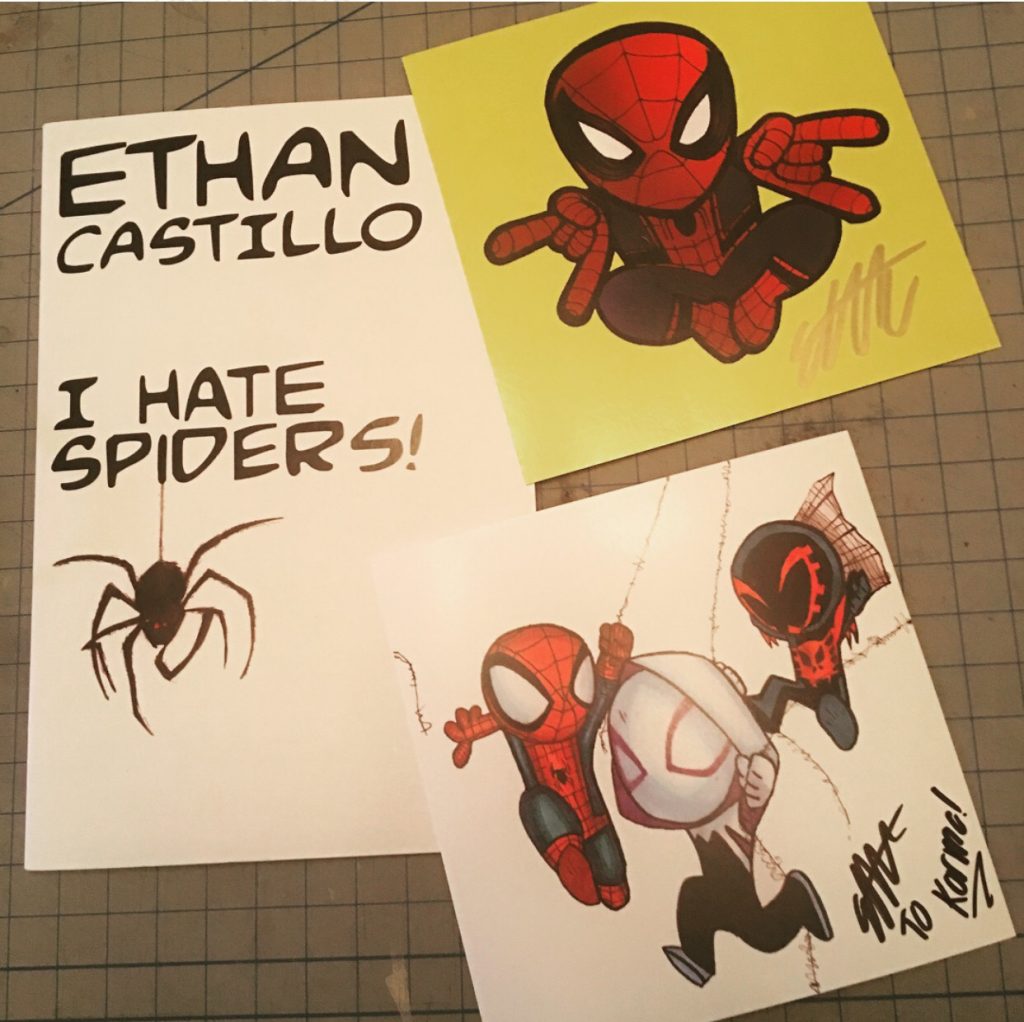 Artist Alley is always one of my favorite parts of a Con. Walking around admiring new and seasoned artist works, maybe even buying some original artwork or a commissioned piece. This year I sought out an artist table. I had been following a 12-year-old artist, Ethan Castillo on Instagram since his early years as a natural talent sensation. So, it was extra special to get to meet him and his father at booth C-04 this year. I even got a freestyle sketch. Please take a moment to check out Ethan’s Instagram account to see his vast portfolio.

The weather was perfect for the convention setting. Friday, Saturday, and Sunday were fully packed with con goers. Before even reaching the entry door of the Anaheim Convention Center and after “tapping in” your badge at the entry/exit points, one was greeted with groups upon groups of cosplayers. Being a DragonCon Cosplay snob, I must admit the cosplay talent was very impressive.

Check out our photo gallery of WonderCon Cosplay and if you recognize the cosplay artist (or you are the artist) please let us know via a Direct Message Tweet @wearesecondu so we may credit on the photo. See you next year WonderCon!

“I never will understand the medical mind.“ “Miri” may be one of the most perfect episodes of Star …