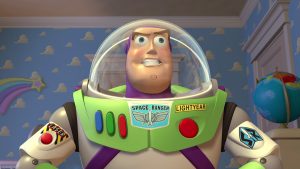 Welcome to my first Pixar review! I love to multitask, and while I’m currently doing a Tim Burton review series AND a Star Wars review series, the more the merrier, right? Anyway, here’s my review for Toy Story, starring Tom Hanks and Tim Allen.

This was Pixar’s first movie, and it’s widely considered to be the best. I don’t believe it to be the studio’s best, but it’s an amazing film nonetheless. It follows Woody (Tom Hanks), a cowboy figure who feels envy over the popularity of his owner Andy’s new toy, a Space Ranger named Buzz Lightyear (Tim Allen). When an attempt to get rid of Buzz goes sour, Woody and his rival must team up to get back home before Andy moves to a new house.

This is one of the most original stories I’ve seen in a film. A multitude of films have tried to capitalize off of the success and create the same story, but with different characters (including 2016’s The Secret Life of Pets). However, that doesn’t stop the film from being any better than its rip-offs. 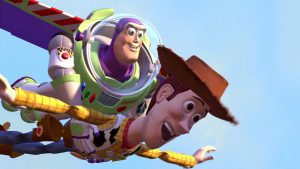 Another really great part of the film is its characters. They are developed more thoroughly in sequels, but you can connect to the character of Woody because what he is feeling is something that any normal person would feel. Buzz’s character is also very well developed because of the emotion put into his character. In addition to that, the other characters each have their own designated attitudes, which makes them more realistic and grounded. Hamm is very sarcastic. Mr. Potato Head is kind of a jerk and is very skeptical of things. Rex is cowardly. Slinky Dog is wise. The list goes on and on.

Another really enjoyable aspect is the writing. The screenplay (co-written by Joss Whedon) blends comedy and emotion perfectly, which makes the journey of both toys incredibly relatable and definitely gives the viewer a more grounded experience. Fully encapsulating how the other toys feel makes the film feel more real as well because not every toy agrees with Woody’s attempt to get rid of Buzz. While the film is hailed as a classic, it’s rarely explained why so, and the screenplay is without a doubt the reason why.

The animation feels quite bit dated, but considering that Toy Story was Pixar’s first film and their animation has definitely improved, it’s not that big of an issue with me. It’s just that the characters’ bodies aren’t as blended with the environment as they should be, and the end result looks a bit like an unfinished 3D model. Nevertheless, the movements are still very fluid, so it isn’t all that bad.

Overall, Toy Story is an animated classic. While the character models don’t entirely look as finished as they should, the final product is most certainly amazing. With stellar writing, emotional connection, and humor, Toy Story earns an A.

Hello, fellow anime and pop culture fans! Welcome back to another recap of Attack On Titan! Episode 3, titled …

Beetlejuice is the second film directed by Tim Burton. It stars Geena Davis and Alec Baldwin as Barbara …