REVIEW: Guardians of the Galaxy Vol. 2 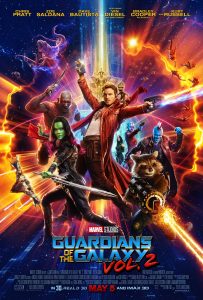 Guardians of the Galaxy Vol. 2 is finally in theaters! We can officially feast our eyes upon the latest entry in the Marvel Cinematic Universe, but does it live up to the immense hype and bar set by its predecessor?

I remember back in August of 2014 when I went to go see the first Guardians film. Since it had the Marvel name attached to it, of course, I was excited to see it, but it was certainly different than any other MCU film before it. It didn’t take place on Earth, for one, and not all of the main characters were human. I was a bit nervous, but once I exited the theater, I was very satisfied. Filled with space battles, more humor than any other Marvel film before it, and irresistibly charming characters, it was (and still is) my favorite Marvel film ever made. When the teaser trailer for the sequel was released back in October, I viewed it instantly. After a few more trailers, and months of waiting, we have the full film. So, without any further ado, here’s my review for Guardians of the Galaxy Vol. 2!

There were a lot of pros in this film, but there were quite a few cons as well. Don’t go in expecting this to be the greatest Marvel movie ever. It has a lot of fun moments, but there are certainly a lot of problems. Let’s talk about some of those. First off, the Sovereign race–who were supposedly an integral part of the story based on the trailers–they didn’t get squat. Without them, our heroes wouldn’t have crash-landed on the planet Berhert and met Ego (Kurt Russell), but overall, the story with them played out way differently than I expected. Sometimes that’s a good thing, but in this case, I would’ve liked for them to get way more than they did. Another problem I had, this one more minor, is that the comedy really feels forced and dry in some spots. For instance, those who liked the more natural humor that occurred in the first film will definitely feel let down by the poop jokes and Drax (Dave Bautista) just being weird.

This next issue has more to do with the story, and it’s about the Ravagers. I won’t spoil anything (obviously), but there’s a lot of drama that goes on between Yondu (Michael Rooker) and another Ravager, Stakar (Sylvester Stallone). The film expects you to care about what’s going on between the pair, but it really doesn’t give the viewer anything to tie into this. I would’ve enjoyed seeing a Ravager backstory between the two and maybe there will be one on the Blu-Ray’s deleted scenes. I don’t know. But I’m judging this film based on what I saw and heard, and very little was given about the relationship these two shared.

Another major problem I had was with the story. Yet again, no spoilers, but the story is really familiar. The twist (even though I wasn’t expecting it) was kind of generic, and a lot of the other moments felt rehashed to some extent. Even though a lot of the film was a blast to watch, the more “emotional” moments between characters like Gamora (Zoe Saldana) and Nebula (Karen Gillan) felt a bit unoriginal. I can see where James Gunn wanted to go with this, but it rarely feels new and unlike other MCU films we’ve seen before.

Alright, now onto what I loved about Guardians of the Galaxy Vol. 2. If you couldn’t tell from the trailers, Baby Groot is frickin’ adorable. This little dude stole the show (as expected) and provided some of the greatest comic relief I’ve seen in movies. From the opening credits scene of him dancing to Electric Light Orchestra’s “Mr. Blue Sky”, I knew that he was going to be great, and he was. Just the faces he makes are adorable, and that’s only the start. See this movie for yourself, and you’ll see what I’m talking about.

The character interactions in this film were great as well. Drax and Mantis (Pom Klementieff) proved to have great chemistry, as well as Rocket (Bradley Cooper) and Yondu. Since the first film didn’t need to tell that kind of story yet, it didn’t choose to, but I’m glad that the MCU films are taking this route. If you haven’t heard by now, Guardians of the Galaxy Vol. 2 has a whopping five post-credits scenes, and of course, each and every one is hilarious. Stan Lee’s cameo is funny as always, and he makes an appearance twice: once during the film, and once during the last post-credits scene.

The music in this film was really, really good. I heavily enjoyed Tyler Bates’ score for the film, in addition to the second “Awesome Mix” soundtrack. While I can’t see “Awesome Mix Vol. 2” being as big a hit as “Awesome Mix Vol. 1” was, it’s undeniably a good accompaniment to the movie, just not at the same level as its predecessor.

The action sequences and visuals are spectacular to watch. Even though Guardians of the Galaxy Vol. 2 takes a lot more breaks than the first one, there’s still plenty of eye candy for diehard Marvel fans to, well…marvel at. When the crew is on Ego’s planet (no spoilers, this was shown in the trailers) there was a really astonishing scene where there are these colorful bubbles floating around. If you were impressed by Doctor Strange last year, go into this knowing that the visuals are just as spectacular, while not as psychedelic.

Also, there were some terrifically effective Easter Eggs in the film. Howard the Duck makes a second appearance (his debut being at the end of the first Guardians). Cosmo the Spacedog also returns. In the ending credits, you can catch Jeff Goldblum’s Grandmaster (who will appear in Thor: Ragnarok) dancing to the original song “Guardians Inferno”. And of course, because Ego is in the film, we get a glimpse at the Celestial in planet form. Speaking of the credits, they are a great homage to the 70’s and 80’s, with vibrant neon colors and characters dancing.

I had other things I loved and didn’t love about the film, but I can’t talk about them without giving away crucial info about the film. So, here’s the final verdict. Guardians of the Galaxy Vol. 2 is a really good Marvel film and a great superhero one too. It was lacking what made the first one such a big hit with fans, but it’s undeniably a solid entry in the Marvel Cinematic Universe. I’m going to give Guardians of the Galaxy Vol. 2 a B+. If you enjoyed the first film, definitely see this. However, don’t go in expecting it to be better.

And, for those of you who wish to know, Nova Prime (Glenn Close) and the Nova Corps, who appeared in the first film, are not in this movie.