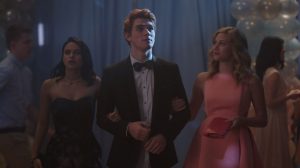 Welcome to my review for the first season of the CW’s Riverdale, based on Archie Comics characters. The series stars KJ Apa as Archie Andrews, who is starting the school year with a new purpose: music. Betty Cooper (Lili Reinhart) has a big crush on Archie at the start of the year. New to town is Veronica Lodge (Camila Mendes), who has arrived after her father has been put in jail. Jughead Jones (Cole Sprouse) is working on a novel about the recent death of high schooler Jason Blossom. Jason’s sister Cheryl (Madelaine Petsch) is still coping with the loss of her brother.

This isn’t the greatest show on television right now. It has a lot of issues. But it proves to be effective as a guilty pleasure. We all have them, and this is one of the biggest examples of how to make one. Filled with romance and teen drama, but also a murder mystery is thrown into the mix, it’s an odd show. But it works for me, and if this is your kind of thing, you’ll like it as well. Let’s talk about the pros of Riverdale. 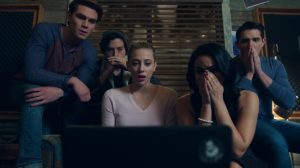 For one, the twists actually work in this show. There are a lot of television series that can’t balance what it takes to keep viewers compelled, but this is one of the shows that could hold my interest fully until the next episode. Whether it came on the week after, or a few weeks after the last episode (this show tended to have weird airing times), I was consistently engaged with what was going on. Even though some episodes were arguably better than others (and it showed), I was only truly let down once or twice.

I really enjoyed the camerawork in the episodes. Riverdale is a very fluid and cinematic-looking show, which makes watching it all the better. However, this show is not without its problems, and believe me, there are many. Let’s talk about those. There’s a glaring issue that is visible throughout the show, and it’s the pacing. This show goes waaaaaaay too fast for my liking, and it proves to drag the show down. The series tries to juggle subplots (that just aren’t that interesting) along with the main story arcs, and it doesn’t work. 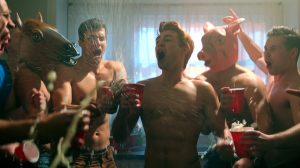 The series is also dragged down by a muddled story. There’s a lot of fun to be had with the romps these teens take in the town of Riverdale, but there’s no doubt that the writers are trying to incorporate too many story arcs into a show that’s only 13 episodes. While I appreciate that television seasons aren’t overly long like they used to, I think that this show needed some more time to develop its characters and stretch out the story arcs so that they didn’t interfere with each other.

If you’re looking for a new guilty pleasure, definitely check this show out. It’s fun, has some hilarious moments, and great twists. However, you may be let down by a muddled story and some glaring pacing problems. I’m going to give Season 1 of Riverdale a B-.

Created by Charlie Brooker, Black Mirror remains one of the most addictive television anthologies produced today. Best described by …

The highly awaited Fantastic Beasts And Where To Find Them is finally here! Set in the Harry Potter universe, …