RECAP: Attack On Titan – “The Hunters” 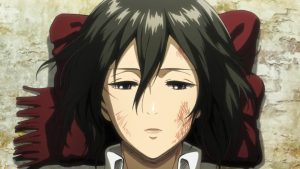 After last week’s crazy episode, there really wasn’t any doubt in my mind that this was going to be a more character-focused and quiet entry. This season has done a pretty great job of juggling what fans want and what the story needs. There was a drop in quality this week, but the finality sufficiently worked in the grand scheme of things. Let’s discuss Episode 8 – “The Hunters”.

We are officially 2/3 done with Season 2. I can say with certainty that this episode is a good transition into the final third. We have seen plenty of crap go down this season, so it was no surprise that the majority of “The Hunters” was spent with lots of talking and setting up what is to come. I normally would be fine with that, but unfortunately, the writing for this episode just isn’t that good. It failed to deliver what other episodes could, and with the impending finale upon us in a few weeks, I hope that the final four episodes can revive what made these past ones so great. 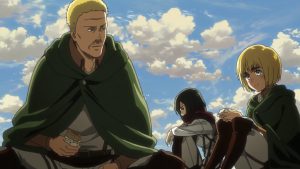 There wasn’t any action this week, aside from a flashback where Eren takes on a group of bullies. Mikasa ends up kicking their butts before they hurriedly run away from guards. It was refreshing to see Eren sticking up for his friend (Armin) since we rarely see what the trio’s life was like before the fall of Wall Maria. I’ve really enjoyed Armin’s growth since Season 1. From the beginning, he was kind of the Leonard Hofstadter of Attack on Titan. But he has grown from a shy, nerdy, picked-on kid to a brave scout who is willing to fight among his comrades.

Attack on Titan Season 2‘s eighth episode, “The Hunters”, is a good transition into the third arc of the season. While it featured some rough writing, Mikasa’s flashback was effective, and the ending scene with the Scouts advancing to Reiner and Bertolt’s position (accompanied by some great music) served as a great way to tie up the episode. “The Hunters gets an 8/10.

Stay tuned for my recap of next week’s episode – “Opening”.