INTERVIEW: Pat Evans From ‘The Beat of the Bat’

Those of us of a certain age, having grown up in the 70’s, remember the original Batman television series with an almost religious reverence. The series based on the heroic exploits of DC Comics’ Dynamic Duo, Batman and Robin, was beamed into our living rooms every weekday afternoon in syndication. Before Batman became a Dark Knight on the silver screen, our adolescent brains were inundated with the campy, hyper-realistic, tongue-in-cheek absurdity that was the foundation for this groundbreaking program.

And we loved every Bat-Minute of it! 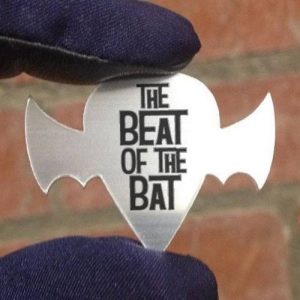 Recently I became aware of an amazing GoFundMe Project that really spoke to my inner child, and my love for the Batman of my youth. The project was called The Beat of the Bat. I had an opportunity to talk with Pat Evans, the creative genius behind The Beat of the Bat and asked him to share a little bit of his background, and the impetus behind this very cool project.

Pat, tell us a little bit about yourself first, who is Pat Evans?

Well, I’m just a guy who has been a Batman fan since I was about 5 years old, and have loved Batman music for just as long. The first album I owned was Neal Hefti’s Batman Theme and 11 Hefti Bat-Songs! I used to listen to it endlessly, and still love it. It’s in my blood. It’s amazing to have watched Batman music grow from those beginnings into its own genre.

I’m also a graphic artist, though mostly for friends or my own projects (like this one). I’ve done a couple of Photoshops that went semi-viral: A poster for a fake “Count Chocula” movie starring Javier Bardem for Cracked.com and a poster for a fake Wonder Twins movie that got quite a bit of play online, up to and including in the Hollywood Reporter. I also edit and do some motion graphics. I do some Batman mashup edits on YouTube as “BatMashUps“.

My weekends I usually spend robbing garage sales at gunpoint. Just to relax, you know? Gotta have a hobby.

Tell us about The Beat of the Bat Project. What is it? What is it all about & who’s involved?

Well, there’s a lot of story! Much more than you might think beyond hearing “it’s a documentary about the music of the “Batman” TV show”.

One of the main parts, of course, is composers Neal Hefti (who wrote the theme song), Nelson Riddle (who scored season 1 and 2) & Billy May (who scored season 3). So there’s obviously biographical info on these amazing guys. Aside from doing their own incredible individual musical projects, they all 3 worked with Sinatra at different periods. All heavy, heavy hitters of that era. Sadly, all 3 of them have passed but lucky Paul Hefti, Neal’s son, is one of our producers and we’ve spoken to a few people who worked with them. There’s also Jon Burlingame, a USC professor and the country’s leading expert on TV & Film Music. Jon literally wrote the book on TV themes (“Television’s Greatest Hits”) and we had a great interview with him.

Another person I feel blessed to have spoken with is Bob Bain, a capital “L” legendary guitarist who played with Neal, Nelson and Billy. He was the solo accompanist to Audrey Hepburn for “Moon River” from “Breakfast With Tiffany’s”. He was the Tonight Show band guitarist for 30 years with Carson, played on countless TV & movie scores, including “Batman”. He’s one of the guitarists on themes for “Bonanza” & “M*A*S*H”. He’s in his 80’s and still plays out too! I got to hold the guitar he played on the “Batman Theme”. And he played some of it for me too. Mind-blowing.

We’ll also delve into the creation of the theme song, and all the attendant hoopla of it. Separate from the show, the theme song was a phenomenon all it’s own.

It was the most covered song in 1966, there’s dozens and dozens of recordings just from that year alone, so we’ll look at some of the versions of that, from The Who to The Kinks to Jan & Dean- and some of the more bizarre and obscure versions as well.
We had a great interview with Michael Z. Gordon, leader of the Marketts, who recorded a “Batman” themed album in 1966. They managed to get theirs released and on the charts before the official Neal Hefti version! 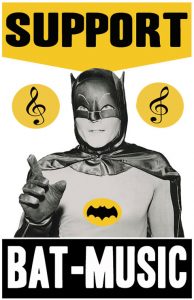 Since then it has been covered by many, many others: Iggy Pop, The Flaming Lips… Eddie Vedder recorded a version with his little daughter Harper recently. One guy we talked to who recorded his own version in 1989 is composer Chuck Cirino (“Chopping Mall”). He recorded it as a sort of an existential protest to it not being used in the Tim Burton movie, God bless him.

The theme has had an enormous cultural impact over the years and is indeed still widely associated with the character. Walk up to anyone anywhere in the world and go “Na Na Na Na Na Na Na Na” and they’ll immediately know what you’re talking about.

We’ll look at Neal’s solo “Batman” albums too, which had nothing to do with the show, but are still awesome in their own right. One of the really interesting side stories is about the guy who produced them, Neely Plumb. I had always wondered about him from seeing his name on the album covers and only just recently have I discovered any real information about him.

Turns out, he’s the father of Eve Plumb- “Jan” from “The Brady Bunch”. And lest we forget, “The Brady Brides” and- my personal favorite- “A Very Brady Christmas”. But he was also quite a musician and arranger. He produced Esquivel’s “Infinity in Sound” album, which is a benchmark for inventive and quality musicianship, arrangement and production.

I’ve always felt he had a big hand behind-the-scenes in the incredible tones of those Batman records and I’m really happy to finally uncover some information about him. I was lucky enough to get in touch with a relative of his, who is himself a music professor. He recently found a treasure trove of Neely’s notes and material he is compiling into a book. I’m super excited we will be able to include some inside information on this mystery genius and give him some much overdue credit.

We’ll also explore what it would have been like recording a session for the show and who the major musicians involved in the recordings were. “Batman” had numerous musical guest stars who also played actual characters. Probably the biggest was Liberace who played Chandell and his evil twin brother. Leslie Gore played Catwoman’s sidekick, Pussycat. Paul Revere and the Raiders were in non-speaking musical roles on an episode. English folk rock duo Chad and Jeremy (“A Summer Song”) played themselves on a 2-parter and we’re lucky to have them in the film. They’re two of the few living musicians left who appeared on the series!

Another big one is Johnny Green, who was the green-haired leader of the Joker’s bad in the 3rd season episode “Surf’s Up, Joker’s Under”. Fans have mixed feelings about the 3rd season of the show, but that episode is generally considered a favorite among everyone. Just look at all the surfing Batman and Joker toys that have been released! Anyway, Johnny still has his green hair, still plays music and is still a wild man. We went back to Torrance Beach just about 50 years to the day from when they filmed the episode and reminisced with him. Lots of fun.

What inspired you to pursue a documentary on the music from the series?

Basically, I noticed after watching and reading a lot of behind-the-scenes material there was scant if any mention of Neal, Nelson, or the music at all. And it kind of made me mad. These guys gave Batman his first musical identity and yet the story has never been told? Criminal! Being that the music of Batman has played such a large part in my life, I really feel karmically obligated to tell this story. 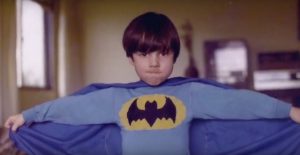 Why Batman? What is it about that television series that you find yourself drawn to?

Well, when I was a little kid it was the most exciting thing you could imagine! Fights with crazy villains, the Batmobile, all the cool gadgets, and of course the greatest hero ever. Then as you get older you realize it’s actually a clever comedy as well. You can appreciate it on many different levels. And it’s still a lot of fun for me to this day. And there’s the good old-fashioned nostalgia factor too. It reminds me of running around the house in the Batman costume my mom made for me when I was a kid. And maybe once or twice as an adult. 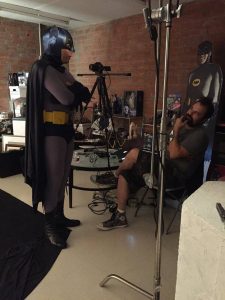 Once you see this project to completion, what does the future hold for Pat Evans? Are there any other projects waiting in the wings?

I do have a couple other ideas for films- providing I survive this one- another documentary and a full-length feature called “Lucky Town”, which is quite dark. Sort of my own personal “Deliverance”- which is for my money one of the most unnerving films ever made. Whatever I do though, the path was informed by the music of “Batman”. That’s why it’s so important for me to do this film. It helped bring me to where I am today.

Thanks again Pat, for giving so generously of your time with us. We truly appreciate it, and hope beyond hope that you meet or exceed your goals with the GoFundMe and this documentary gets made! We are definitely looking forward to watching it!

Before I discuss how this book displays Pixar’s art and story beginnings so beautifully, I’d like to comment in …