Alien: Covenant is the newest film in the Alien franchise and is directed by Ridley Scott, the man behind the original film back in 1979 and the prequel film Prometheus, which came out in 2012. I am a big fan of Alien and Prometheus and while the latter has its issues, I can certainly understand why Scott would want to return to the franchise and build a bridge that connects the original film and the prequel. It has been confirmed that there will be more prequels, but this is the latest. This is a mostly non-spoiler review, so you don’t have to worry much. However, I will be talking about some minor plot details. 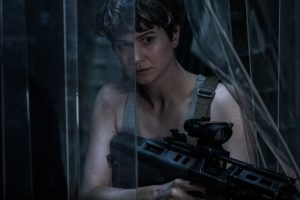 I went in knowing next to nothing about what was going to happen in the movie. I saw the trailer, and that was pretty solid in the way it didn’t give away plot details. In fact, there’s a whole sequence shown in the trailer that isn’t even in the movie. Basically, it’s the same formula as Alien and Prometheus. A group of scientists on their way to some planet happen to come upon another planet. They explore it, and for our group, it just goes downhill from there.

There’s a lot of speculation out there whether this is a sequel to Prometheus, and while I think that it isn’t, you should definitely check it out before seeing Covenant because there’s a lot that you will be confused by if you don’t. The two go hand-in-hand with each other, and one of the characters (played by Michael Fassbender) actually reprises his role from Prometheus. So, no, Covenant isn’t a sequel, but definitely check out Prometheus anyway.

I want to get into the problems first because this is a pretty enjoyable movie. It has a lot to like about it, and though fans will probably be disappointed, Covenant is one of the better entries in the franchise. Alright, so, my first issue is that everyone–I kid you not, everyone–is making super dumb decisions. There was one specific moment where I was just appalled at the level of stupidity one character showed. I cannot believe that someone would be that much of an idiot to fall for something so obviously dangerous.

Another problem I have is that the film feels tonally inconsistent. There are moments where it tries to follow in Alien’s footsteps and take the more “psychological horror” route, and there are times when it ends up being a typical slasher film and the crew members are getting picked off one by one, it also being very easy to tell who’s next. Characters do something stupid, like take a shower or poke the Xenomorph spores, and end up kicking the bucket. It also tries to be a more quiet film, and while it works sometimes, it mostly doesn’t.

Now, onto what I liked about the film. First of all, the Xenomorph and Neomorphs look really good. While I don’t like how everything is reliant on CGI, this is an exception because the creatures are very scary. The chest burst scene from the original Alien is one of the most iconic and unsettling horror movie moments of all time. While the horror in Covenant feels a lot less like horror and more like your typical summer movie blockbuster, the scares were surprisingly effective in spots.

The story is also pretty good. I was expecting more from the alien story arc, but the main focus is on David and Walter. I’m not giving anything away, but the story arc for the two was very interesting, very compelling, and really well-written. It took its time to establish the relationship between characters, which worked in the movie’s favor. Not only does it create a nice setup for the future films, but it was a great bridge between Prometheus and Alien.

I do wish the writers had taken a bit more time on the character of Daniels (Katherine Waterston). I liked Waterston in Fantastic Beasts and Where to Find Them, but I just don’t think she got enough here. She’s an alright female lead, and I enjoyed her character sometimes, but to me, it just felt like the screenwriters tried too hard to make her character more Lara Croft-like. It would’ve worked better if they just let it come naturally, but they chose not to.

Alien: Covenant has a very interesting story, pretty good writing, and serves as a worthy prequel to Ridley Scott’s original classic. The characters are neither smart nor developed well, and the clichéd circumstances drag it down. However, the movie is enjoyable and fun to watch. I’m going to give Alien: Covenant a B-.

The final trailer has been released for the action-packed, ultra-violent thriller Mile 22 from STX Films, starring Mark …