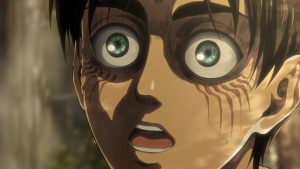 Worst. Attack On Titan. Episode. Ever.

That’s right folks, after 8 awesome episodes, and a very improved upon story, we come to this. “Opening” is by far the worst episode of Attack On Titan ever. It’s boring, dull, terribly paced, and a complete waste of 24 minutes. After seeing this, I really hope that the rest of the season doesn’t falter like this episode did. The most compelling part was watching the Scouts (including Mikasa) riding to the area where Eren and Ymir have been taken by Bertolt and Reiner. I only say that because they’re running out of time, and it made for a semi-interesting subplot, but the focus this week was on Eren, who is discovering more about Reiner’s and Bertolt’s motives. This may sound interesting, but the way it was conveyed was really sluggish. It also didn’t help that the dialogue was pretty terrible as well. 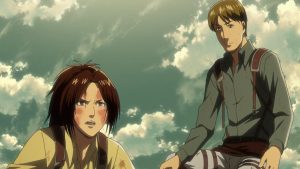 When an episode of AoT is concerned with one specific plot, it tends to stay focused on that plot, and not shift away from anything else. I can think of a few instances in Season One when it would switch, but the episodes are reasonably focused on one thing, and one thing only. In “Opening”, the series sticks true to that rule, but it didn’t work for me. Why? Because the main plot was just too damn boring this week. A message to the writers: if you want fans to have a compelling story arc laid out before them, don’t make it about four people in a tree.

There was a hilarious moment at the beginning with Hange, who wants to accompany the Scouts on the expedition. I won’t spoil it, but I did laugh. Along with that, there was a pretty interesting scene explaining how Reiner is suffering from a split personality. What dragged it down, though, was how it was conveyed, and the overall message wasn’t as easy to understand as I would’ve liked. 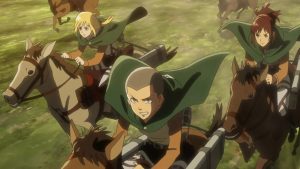 Is this episode good? Not in the slightest. It simply can’t live up to the bar set by the past eight episodes. Ones that built upon each other and proved that second seasons can be better than first seasons. With cruddy dialogue, a highly uninteresting storyline, and a confusing twist, “Opening” gets a 4/10.

Join me next week for a recap of Episode 10 – “Children”.

Kingsman: The Golden Circle has proven to be one of the most anticipated movies of 2017, and 20th Century …

For fans of the film franchise, Resident Evil: The Final Chapter offers a satisfying conclusion to disjointed storytelling and lack of transition …