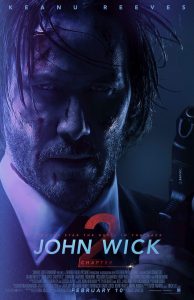 In John Wick: Chapter 2, fans of the first film are able to revisit the titular ex-hitman in true action-movie style. I really enjoyed the first film, and it definitely deserves to be seen at least once. It was an emotional trip, one that forced you to pay close attention and be in the moment. That film surprised a lot of viewers, and it’s safe to say that the sequel was one of my most anticipated films of the year. I didn’t see it in theaters, but it’s out on digital now, and out on Blu-Ray next Tuesday. Here’s my review of the film.

John Wick: Chapter 2 is flat-out awesome. This movie begins only a few days after its predecessor and continues the storyline well. Keanu Reeves, yet again, knocks it out of the park with his stunt work. The well-choreographed action only adds to the level of realism, and the body count is a lot higher as well. If you thought Reeves was a badass in the first film, well you’re in for a treat with the second. We see John Wick brutally slaughter countless goons, and while the assailants begin to get a bit video-gamey, that doesn’t stop him from kicking all sorts of butt. I mean, this character murders two assassins with a pencil! What other movie characters can do that?

The writing is also spot-on. While the film lacks the emotional depth its predecessor had, the dialogue is a lot better. The corny dialogue was one of my main problems with the first film, but it’s fixed here.

The character that really stood out to me was Ares, played by Ruby Rose. She isn’t seen much in the film, but what we get of her is very good. While the character is mute, her skills in hand-to-hand combat make her a character I really wish was explored more. While she does kick the bucket at the end of the film, her valiant effort to stop Wick was a great scene.

The action sequences, like I mentioned before, are very well-choreographed, which makes them more realistic and fun to watch. However, this feels a lot more like an action movie when compared to the first film. While its predecessor had some really phenomenal and stylish action scenes, this film doubles down on the bone-crunching violence and gore and proves once more that sequels can be better than their predecessors. The final action sequence most definitely draws inspiration from the Bruce Lee film Enter the Dragon. In fact, I really enjoyed the way it served as a homage to the final action scene in that film.

There are some characters that were quite a bit underdeveloped, such as (like mentioned before) Ares, The Bowery King (Laurence Fishburne), Cassian (Common), etc.. There were moments when I really wished that I had prior knowledge to events that are being forcibly spoken about, and you can tell the only reason they’re there is just so the viewer can be partially in the know. If Chad Stahelski makes a prequel John Wick film, then it would be nice to see these events depicted.

The score is also very well-done. Tyler Bates, who composed the score for the first film, as well as Watchmen and Guardians of the Galaxy 1&2, did a great job on this film’s score. Also, kudos to music producer Le Castle Vania and the band Nostalghia for creating great background music for the club sequence.

The ending is pretty obviously setting up a third film, but it did it so well that I didn’t mind it at all. On any normal occasion, I would be the first to point out that an ending that blatantly sets up a sequel is bad, but there is that rare instance when I appreciate the writers’ decision to set up a sequel. This was one of those instances.

John Wick: Chapter 2 is one of the best films of the year. While it has some underdeveloped characters, the rest is spot-on. Filled with awesome, bloody action sequences, great writing, and exploring the lore behind the main character’s occupation, the film gets an A-.

Yesterday IGN debuted the first trailer for DC’s Batman vs. Two-Face, the animated follow-up to last year’s Batman: Return of the …

Well, your dream of swimming in a vault of gold coins at McDuck Manor may yet come true! …