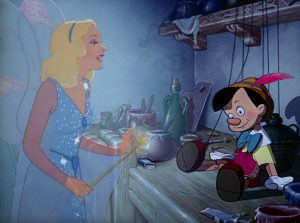 Welcome back to my review series of classic Disney films! We left off with the studio’s first film, Snow White and the Seven Dwarfs. Now, I am going to cover Pinocchio, the studio’s second film. This one follows a marionette named Pinocchio, who is brought to life by a fairy. If he can prove that he is brave, truthful, and unselfish, he will be transformed into a real boy. This is, unlike Snow White, a flawless film in my eyes. It is a phenomenal Disney film and one of the best-animated films of all time.

The story is perfection. It is told so well, and is funny, emotional, and an overall solid tale of a character that many know about. Even though this was only the studio’s second feature film, the writing is spot-on and the emotions are conveyed very well. 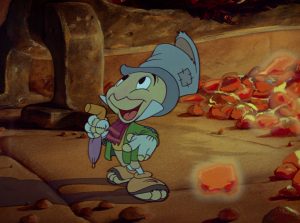 The music is just as good as Snow White, if not better. It is performed perfectly, and each song is just amazing. You don’t even have to have seen Pinocchio to know  “When You Wish Upon A Star”, as it plays during the opening titles of every Disney film nowadays.

The iconic characters are well-written, and the voice actor perform their roles well. Not a single line is delivered without, grief, humor, excitement, or whatever emotion fits the scene. That’s one of the reasons why I love Pinocchio. It’s so many things, so it doesn’t try to be, or have to be, anything else. It’s perfect just the way it is.

Jiminy Cricket is the perfect narrator for this story, one that blends comedy and seriousness oh so well. He is one of Disney’s best characters, and it’s no surprise that he steals the show instead of the titular character he helps throughout the film. The animation is very fluid, and looks really good as well. The water effects are done well and the characters’ facial expressions and movements looks great too.

If you haven’t seen Pinocchio, I beg of you to give it a chance. Trust me, you won’t regret it. Filled with three-dimensional characters, well-written dialogue, a phenomenal and well-flowing story, and one of the Disney films’ most important life lessons, Pinocchio certainly earns an A+.

The CW has just revealed a first look image from their upcoming television series, Black Lightning! The series …