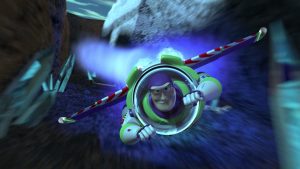 Welcome back to my series of Pixar reviews! Today, we’ll be taking a look at Toy Story 2, the studio’s third film. Man, I love this movie. It’s so awesome. It has problems, but it’s still a wonderful animated film.

Toy Story 2‘s animation is a lot better than its predecessor, and it’s evident as soon as the film starts. Right from the get-go, the opening sequence featuring Buzz Lightyear in one of the best and most imaginative scenes in the film. In this scene, we are treated to a Star Wars-like battle between Buzz and some robots, and then we are introduced to Zurg, one of the greatest villains in Pixar’s library. While he doesn’t show up much in the film, what makes him memorable is how he is treated. First of all, The Empire Strikes Back is referenced when Zurg reveals himself to be Buzz’s father. Second, he’s just a total badass (when you take away the fact that he’s a toy). The way his rivalry with Buzz is portrayed in this film makes him likable and interesting. 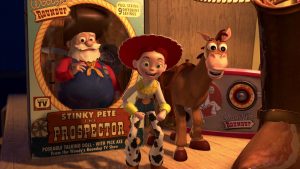 The story, is, while not as original as the first film, still great. Basically, Woody is stolen by a collector and put with the other members of his toy line: Jessie, Bullseye, and Stinky Pete. Buzz leads a rescue mission with some of the other toys, while Woody must decide whether to stay with Andy or live a new life with his “Roundup Gang” in a museum.

The standout character, is, of course, Jessie (Joan Cusack). The writing for her is really terrific, and I love when new characters get a lot of development. Her song “When She Loved Me” is one of the most emotional and heartbreaking things to ever come out of an animated film, period. Also worth mentioning is Bullseye, the horse, who is awesome.

Now, my main problem with the film is the other villain, Stinky Pete (Kelsey Grammer). Stinky Pete’s motives are realistic (for a film about toys, at least) but he just doesn’t get enough spotlight and development. He gets what he deserves in the end, but his overall effect on me isn’t as high as some of the other Pixar villains. The studio has shown that they can come up with some amazing antagonists, but Stinky Pete ain’t one of them.

This is definitely my least favorite of the Toy Story films, but that really isn’t saying much because they’re all amazing. While the villain is lackluster, the writing, comedic aspects, and story are fantastic. I’m going to give Toy Story 2 an A.

“Vulcan, like Earth, had its aggressive, colonizing period; savage, even by Earth standards. And if the Romulans retained …

Official Synopsis: When there is an assassination attempt on U.S. President Allan Trumbull (Morgan Freeman), his trusted confidant, …