The final episode of Attack On Titan Season 2 is upon us and did it disappoint. Not in the slightest. Before I get into my recap, I am excited to say that Season 3 has been confirmed for 2018! I cannot wait to see what goes down next year. Now, onto the recap. This was, as previously mentioned, the finale. As always, this will we spoiler-heavy. 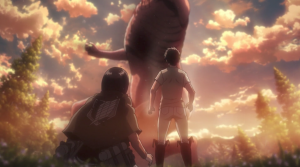 The cliffhanger in last week’s episode was extremely good. I’m glad they brought back the Smiling Titan for the finale because it really worked. The overall effect served as a worthy conclusion to a great season. The first thing that the episode shows is a flashback (of course) to Eren’s mother telling the former he has to be there for Mikasa. Then, the shot of the Smiling Titan eating her. I could really feel the emotional depth the writers were going for, and they really pulled it off.

Sure, it goes all out, which makes sense. There isn’t any major character development because, at this point in the season, it’s not necessary. There are plenty of times for that. At this moment, the show needed to deliver a punch to the viewers, and it did. Hannes dies in this episode, courtesy of the Smiling Titan, which was pretty emotional. He hasn’t been in every episode of the series, but he’s been with Eren and Mikasa since the beginning, so it was very sad to see him die in a such a brutal way. Rest in peace Hannes, you will be missed. 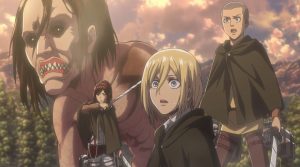 The rest of the episode was really interesting, and the thing that stood out most to me (and definitely many others) was Eren’s newfound ability? Power? Whatever you want to call it, he can somehow command Titans to do things. I’m sure it will be explained next season, but boy, that was a shocker. He used this power to slow down Reiner and Bertolt, as well as kill the Smiling Titan. The latter was a bloody, but satisfying end to an antagonist that caused so much pain for Eren.

The ending scene with Conny and Hange explaining to Pixis, Erwin, and Levi about the Titan that may or may not be people was another interesting inclusion. It’ll be fun to see where this arc goes, as it is something that has piqued my interest consistently. The ending shot with the Beast Titan and another figure was very confusing, but it will most definitely be explored in Season 3 so I’m not worried.

My only issue with this episode is that it leaves waaaaay more questions than answers. Such as: who was that mysterious figure? How did this Titan-controlling power originate? What’s next for Reiner, Bertolt, and Ymir? Those any many others made me more excited for Season 3 but dragged this episode down.

“Scream” was a satisfying conclusion to Attack On Titan Season 2. It was not only entertaining but emotional as well. It left more questions than answers, but Season 3 will be certainly worth the wait to see them answered. The episode gets a 9/10.

Winter is here. The holidays have now come and gone. What we’re left with is a brand new …

The ever-expanding world of The CW’s “Arrowverse” is about to get a new corner…and a trailblazing new hero. …