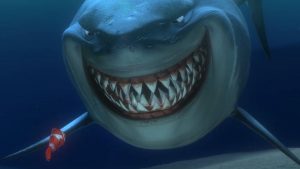 Welcome back to my series of Pixar reviews! Today we’ll be looking at Finding Nemo, one of their first films, and (yet again) one of their best. I’ve seen this film countless times, but I still love it. It isn’t perfect, but it’s a highly enjoyable experience, and if you haven’t seen it, you’re missing out.

Finding Nemo follows a clownfish named Marlin and a blue tang fish named Dory who must travel across the ocean to rescue Marlin’s son Nemo, who was abducted by a diver. Over the course of their journey, they encounter sharks, jellyfish, turtles, and many more fascinating creatures.

This is one of the most original stories Pixar has come up with. One of the best parts about it is that you get to witness the characters’ personalities change throughout the course of the film. Marlin changes from an overprotective and demanding father to a more flexible and relaxed one. Nemo becomes more attached to his father, and also more knowledgeable about what’s beyond the reef. I think it’s a very good quality in a film when the characters grow over time. 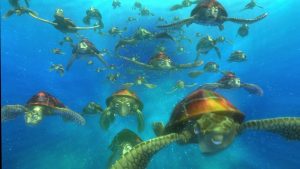 Another great quality this film has is the writing. Finding Nemo is written very well, and, like the previous film, Monsters, Inc., humor is consistent. The characters that don’t show up for that long are well-written, especially the sharks: Bruce, Anchor, and Chum. They are by far one of the best things about this movie, delivering the lines perfectly. The animation is also superb, and I love how every creature (even the non-speaking ones) look. The backgrounds also look really good, especially considering this was only Pixar’s fifth film.

The only problems I have with this movie are that (like Monsters, Inc.) the film feels a bit dedicated to showcasing a neat-looking sea animal anytime it can. Another one is that the film seems to have a lot of chase sequences, and it gets on my nerves when the same thing happens over and over again.

Finding Nemo is one of Pixar’s best. The animation is breathtaking, the characters are very three-dimensional, and the writing is strong. The issues are tiny and barely worth mentioning. I’m going to give Finding Nemo an A.

Not all enemies are created equal. Watch #TheEqualizer2 new trailer now and don’t miss Denzel back in action July 20th. The …