If you attended or were even just aware of Star Wars Celebration Orlando (SWCO) last April, you couldn’t help but run across this man’s work. It was literally EVERYWHERE you looked! Badges, posters, banners, social media etc. Essentially, anything that said “Star Wars Celebration” was accompanied by this man’s artwork. Recently I had an opportunity to talk to my friend Paul Shipper, the man behind those amazing illustrations, and spoke to him about that incredible experience.

Paul, you and I have known each other for over ten years, but for our readers who may not be familiar, why don’t you tell us a little bit about yourself and what you do?

My name is Paul Shipper, I am a freelance illustrator working primarily in creating imagery for film, entertainment, and advertising. A few things from the last 6 months you may have seen; I worked with Lucasfilm to create the Star Wars Celebration Key Art and badge art for the event, Created some poster art for the release of Doctor Strange, a Carrie Fisher tribute illustration for Empire Magazine, Icon: Celebrating Stan Lee Poster Art, continuing to do a lot of BluRay covers for Shout! Factory and T-shirts for Fright-Rags too… I’m a huge advocate for Illustrated movie posters, and I continue to pursue that quest… occasionally breaking through (it ain’t easy!) 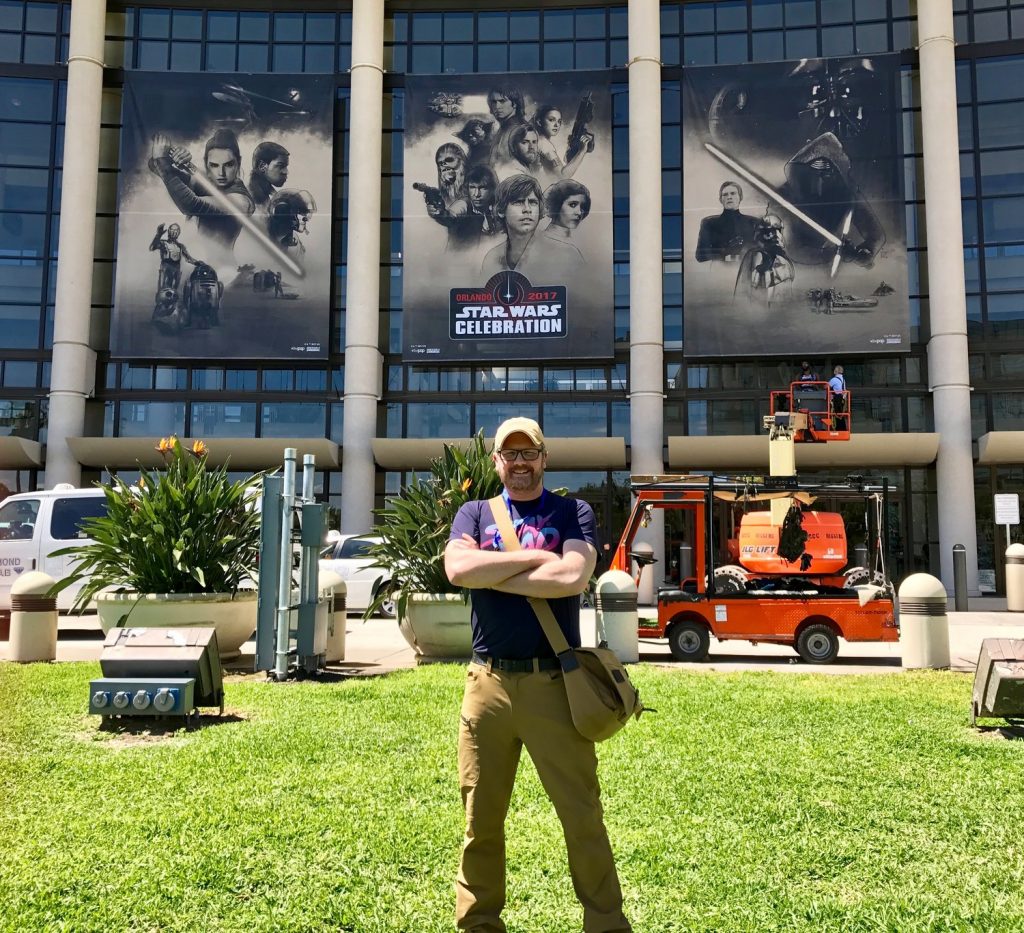 Can you briefly tell us a little bit about your process, and approximately how long it takes you to complete a piece?

All projects vary in scale and the time they take to create from concept to completion. It’s a difficult question to have one definitive answer to. That said, I like to give a project a definite deadline and approximate turnaround of about one month, but I have had to complete some jobs in as little as a day.

At this year’s Star Wars Celebration event, we saw your artwork emblazoned across huge banners, posters, billboards, signage, panel video stills, t-shirts, and lanyards. One can never have too much merchandising. That said, was there any other piece of SWCO swag you wish your artwork could’ve been visible on?

It was incredible seeing the artwork I created all over SWCO, equating it to an out of body experience! It was everywhere! from fans wearing the lanyard badges to being used on so much merchandise too! T-shirts, jigsaw puzzles, fridge magnets, a giant rug/tapestry and tote bags, I don’t think they could have utilized it more than they did, although I was surprised they didn’t use more of the character art on the tees, they had a few but not all. Poe Dameron and BB-8 would have been good on a t-shirt. 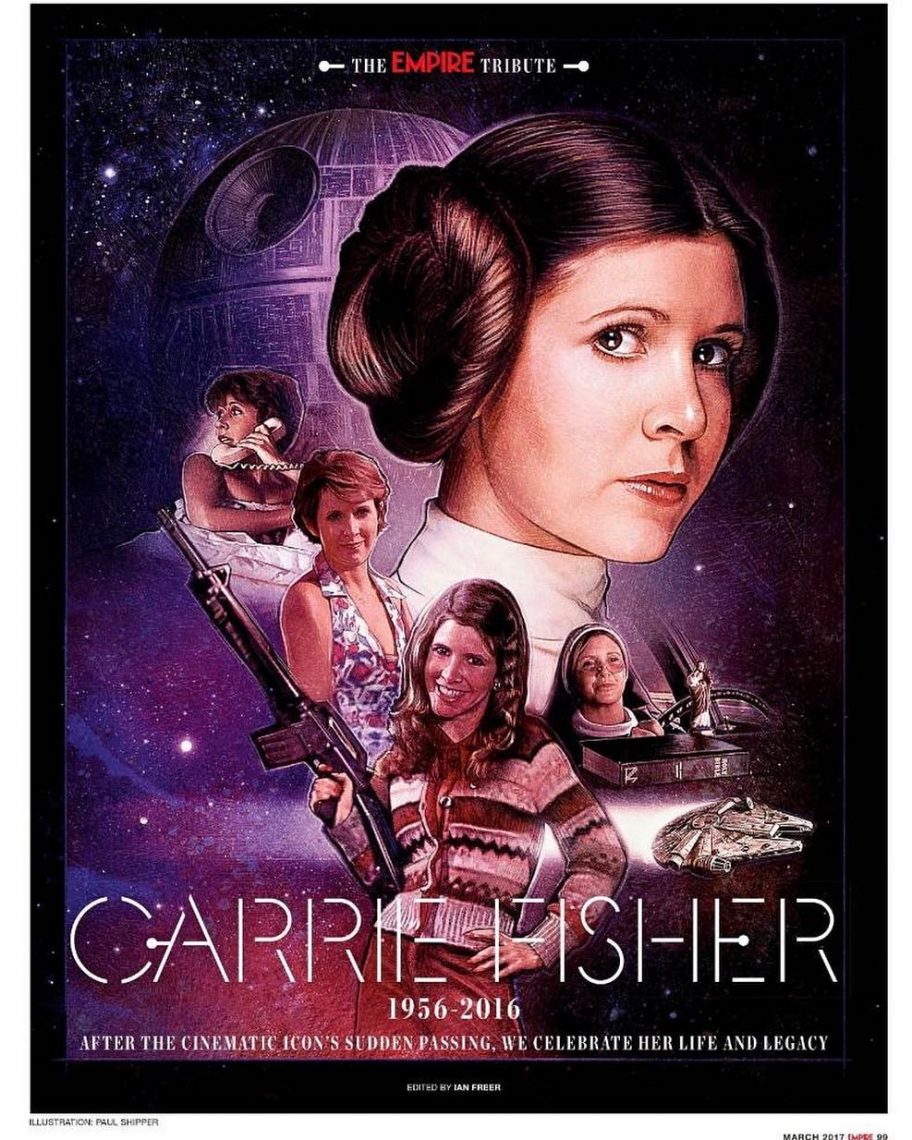 Tell us a little bit about how you came to illustrate the artwork used at this year’s Star Wars Celebration. What was the process involved, and how did it feel when you found out you’d been chosen?

It all started with an email from Lucasfilm in November asking me if I’d be interested in creating the key Art and Badge art for Star Wars Celebration Orlando in 2017. It was a lovely email to receive, and I took about a nanosecond to decide that I would do it!
The process involved talking about the concept idea behind the look of the style of the artwork that they required for celebration. They wanted a sketchy almost unfinished look that still had hyper detail in the facial expressions of the characters. So they were quite specific in what they actually wanted me to create for them. the beginning of the process started with me trying to figure out what the actual look was going to be for the badges, and I went through a few variations before we settled on the final look. once that was settled it was just a case of plowing through each character that was chosen by Lucasfilm for the individual badges.
Once all the badges were approved by Kathleen Kennedy at Lucasfilm it was a case of then trying to figure out how and in what way was I going to tackle the Key art. I went through a few concepts from the triptych idea to a single poster image having lots and lots of characters represented trying to encompass 40 years of Star Wars in the most iconic and beautiful way that I could. Eventually, we settled on a single poster style image is coming up with the characters and which characters to include was quite difficult and ultimately it was down to Lucasfilm who decided which characters were to be represented in the Kay art for Star Wars Celebration. Originally the artwork was in full color but it was the decision of Lucasfilm to keep it within the look of the Badge art which was a sepia toned sketch more than a finished painted poster.
The whole process took about three months from concept to completion and culminating in a finish around February 2017. The artwork was required to be in vertical and horizontal layouts and then towards the middle of March I was asked to make the artwork into three banners which were going to be hung outside of the Exhibition Center and they were about 17 x 30 feet in scale. It was a wonderful experience working with Lucasfilm on this project and especially as a huge Star Wars fan, it was a dream come true. 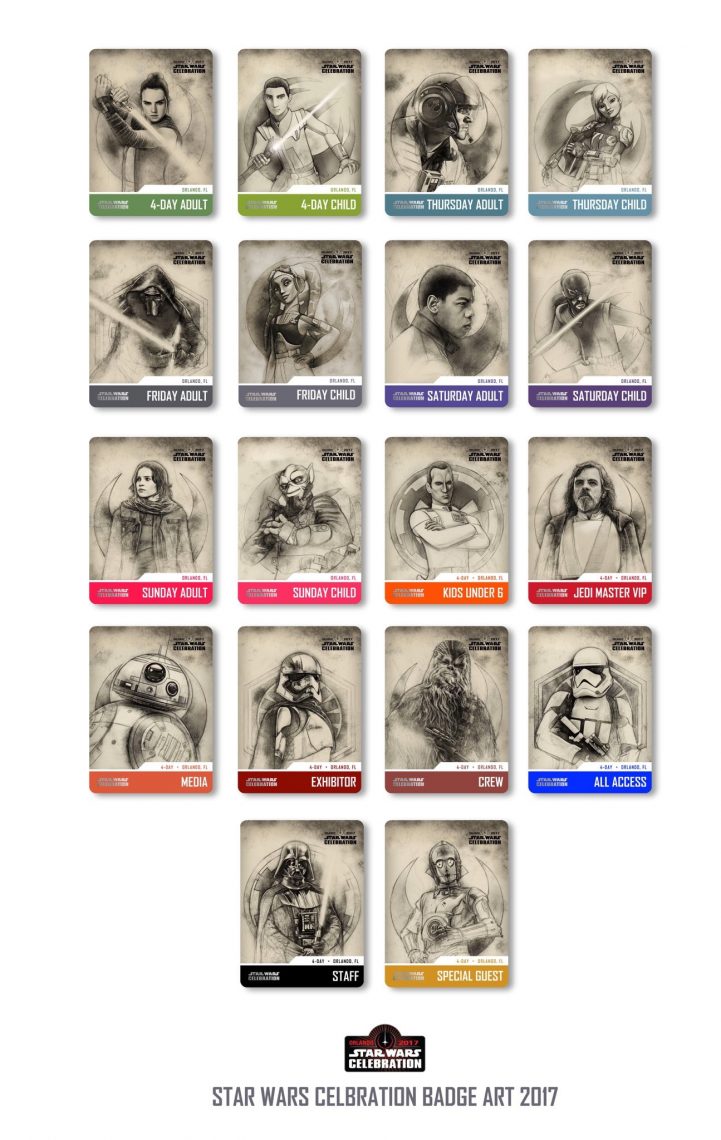 Did you have a particularly favorite celebrity encounter at SWCO?

I was fortunate enough to meet a few famous faces and make some new friends in the process. I had the pleasure of meeting Peter Mayhew at the hotel before the show began, he was hanging out and talking to many fans as they arrived… he must have been there for a few hours… he and his wife are the nicest people. Andi Gutierrez and Anthony Carboni from the Star Wars Show were wonderful and invited me to be on the show (which was very cool – see video below!). Got to finally meet the great Kyle Newman through a good friend of mine, Josh Shipley who is a Disney Imagineer and hung out with him and his friends. Over 2 nights we all went to DisneyWorld and The Star Wars Nights together and had a blast along with Sam Witwer, Dave Filoni, Janina Gavankar, Jett Lucas, Matt Martin, Andi Gutierrez, Jen Muro, Matthew Wood and many more. I briefly met Hayden Christensen there and we were actually surrounded by Star Wars royalty…was pinching myself…Often.

What was your best fan encounter?

I got to meet so many Star Wars fans and they were all incredible! I don’t think I could pinpoint one fan in particular but I would like to take this opportunity to thank them all for their kind words and continued support of the Celebration artwork I created. They are the best! 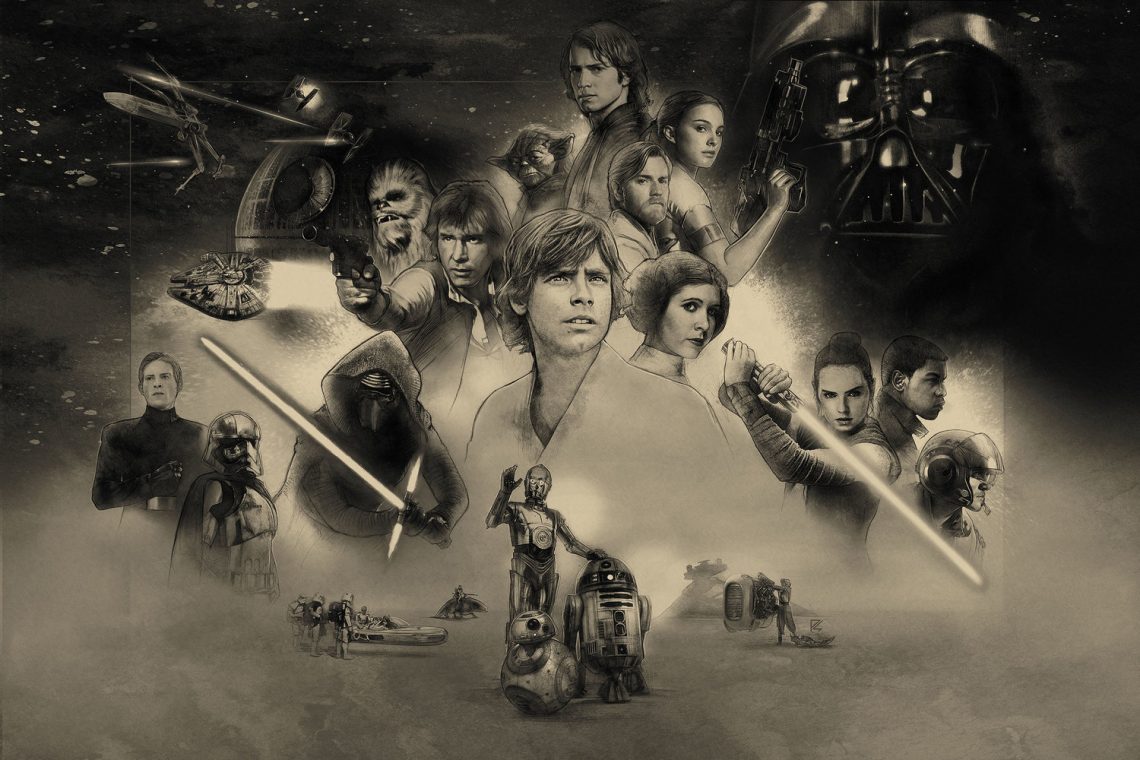 What was your favorite reveal during the four days of the Celebration?

Wow, there were so many! I think the 40th celebration on the first day was one of the highlights, so many wonderful surprises, George Lucas, Mark Hamill, Harrison Ford…a wonderful tribute to Carrie Fisher from her daughter topped off with John Williams conducting a live orchestra. It was very special.

Where do you go from here? What can we expect to see from Paul Shipper Studio in the future?

The future… well, I continue my quest to create illustrated posters for the movies… there are a few in the works… a few irons in the fire … so fingers are continually crossed! A few upcoming projects include:

And I will be at SDCC next month for a few things including the above… stay tuned for more!  Love my job!

Thank you, Paul, for taking the time to sit down with us and talk a little about yourself. I know how much you enjoy doing that!

Star Wars: The Rise of Skywalker is an upcoming American epic space opera film produced, co-written, and directed by J. J. Abrams. It will …