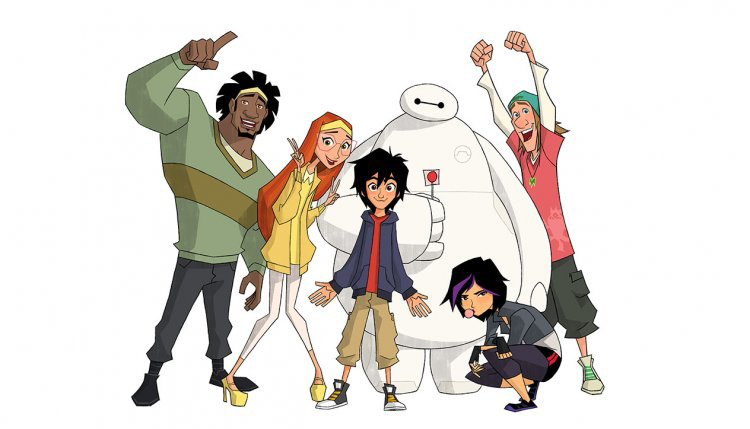 Back in November of last year, we told you about the ‘Big Hero 6’ Animated Series In The Works. Recently Disney XD released a first look at the series intro, and it looks great!  The majority of the original vocal cast from the 2014 feature film will be returning to lend their talents to the series, including Ryan Potter as Hiro; Scott Adsit as Baymax; Alan Tudyk as Alistair Krei; Jamie Chung as Go Go; Maya Rudolph as Aunt Cass; Genesis Rodriguez as Honey Lemon; David Shaughnessy as Heathcliff; and Stan Lee as Fred’s dad. Also joining the cast will be Khary Payton as Wasabi and Brooks Wheelan as Fred.

As the new kid at San Fransokyo Institute of Technology, Hiro faces daunting academic challenges at the prestigious “nerd school” and the social trials of being the “little man on campus.” Luckily, Hiro has his brains, his ingenuity and his best friend bot to help him find his way. But it’s off campus where things get dangerous. Along with neat freak Wasabi, bubbly mad scientist Honey Lemon, fanboy Fred and no nonsense Go Go, the friends form an unlikely, but awesome super hero team – Big Hero 6. Together they face madness and mayhem as a colorful array of science-enhanced villains threaten San Fransokyo.

Can’t get enough…of The Stuff! This movie came on the scene in June 1985 alongside The Goonies, St. …

Official Synopsis: In the brand new adventure Jumanji: Welcome to the Jungle, the tables are turned as four teenagers in …