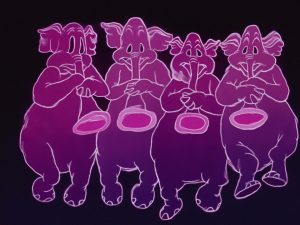 Dumbo is the fourth Disney film and the fourth film in my series of Disney reviews spanning from Snow White and the Seven Dwarfs to ZooTopia. Snow White? Great. Pinocchio? Phenomenal. Fantasia? A flat-out masterpiece. Dumbo? Kind of in between Snow White and Pinocchio. This film isn’t flawless, but it’s a worthy and unforgettable entry in the studio’s library.

The animation is definitely not as groundbreaking or remarkable as Fantasia, but it’s still pretty amazing. The vibrant colors of the circus make for a wonderful experience, and the opening scene with the storks is one of the film’s best. I would have to say the best example of animation in this film would have to be the scene where Dumbo and his friend Timothy (a mouse) accidentally get drunk and have the hallucinations of the pink elephants. Controversial as it may be, you’ve got to admit that the animation in this sequence is on point. Another scene that showcases stellar animation is the scene where Dumbo finds that he can fly.

The characters are pretty bland, which drags the film down. Dumbo himself never talks, and he’s only a baby elephant, so I have to give that a pass, but Timothy is quite underdeveloped. The only character that gets an inch of any so-called development is Dumbo’s mother, Mrs. Jumbo, and we learn that she is willing to attack people to protect her baby (as most animal mothers would). 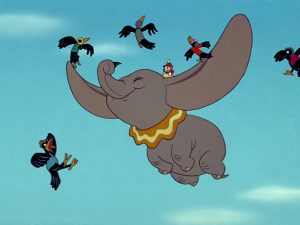 The story is very well-told and quite original, but it does have some pacing inconsistencies. The first two-thirds are perfectly paced, and then as soon as the film reaches the point where Dumbo learns to fly-everything is rushed. The climax, the ending-all of it. Mrs. Jumbo-who had been put in solitary confinement after attacking some mean children-is shown in a modern-looking train car in the final shot. I would’ve liked to know how she got out. Did the ringmaster let her out? Did Dumbo and Timothy? We’ll never know.

Dumbo is nothing special, but its music and story make it one of the more memorable early Disney films. Problems aside, this one is truly great. I’m going to give Dumbo an A-.

After the preceding Iron Man being the smash success it was, Marvel Studios released their next film a month later, …