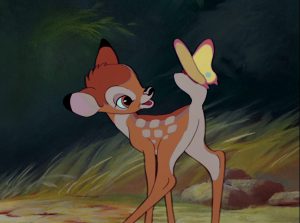 Bambi is the fifth Disney film, and I want to start this review by clarifying something. I will not be reviewing every single animated Disney film ever made. I will simply be reviewing the ones that are the most well-known and revered by audiences and critics alike (with a few exceptions). For instance, I will be skipping over Saludos Amigos, The Three Caballeros, Make Mine Music, etc. and go right to The Adventures of Ichabod and Mr. Toad. If you want a full overview of what I will be reviewing, check out a list I made for this series here. Now, let’s talk about Bambi!

Out of all of the ones in Disney’s library, this is one of the few films that actually started one of what many call “Disney clichés”. This was the first Disney film to actually have a parent die. Bambi’s mother dies off-screen, but she’s still killed. And think about it. Cinderella: Dead parents. Beauty and the Beast: Dead mom. Lilo & Stitch: Dead parents. The list goes on and on. Unfortunately in this film, though, I didn’t feel emotional when Bambi’s mom died. The film gives enough reason to care about her, but not enough development so that we actually can care.

The story of Bambi growing up is heartfelt and emotional itself, though. Seeing him walk for the first time, learn how to speak, and watch him chase a butterfly are only a few examples of how much you watch him grow, and it’s beautiful. When he meets new friends (such as Thumper, a bunny, and Flower, a skunk) it adds on to the emotion even more. Even though the film itself caps out at 70 minutes, it seemed like longer because of how invested I was in the story of Bambi’s life. 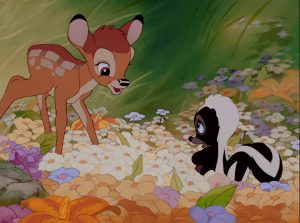 The pacing is very consistent as well. There are some very fast-paced moments that are quite intriguing, but there are also quieter, more calm and tranquil moments. This makes for quite an enjoyable time and not only is the pacing strong, but the writing is, too. While some characters are annoying (sorry, Thumper) I really do love this film and the time it takes to give the viewer a sense of the (albeit fictional) life of a deer.

If you haven’t seen Bambi, I highly recommend you do. It’s well-written, beautifully animated, consistently entertaining, and an overall amazing film. I’m going to give it an A.