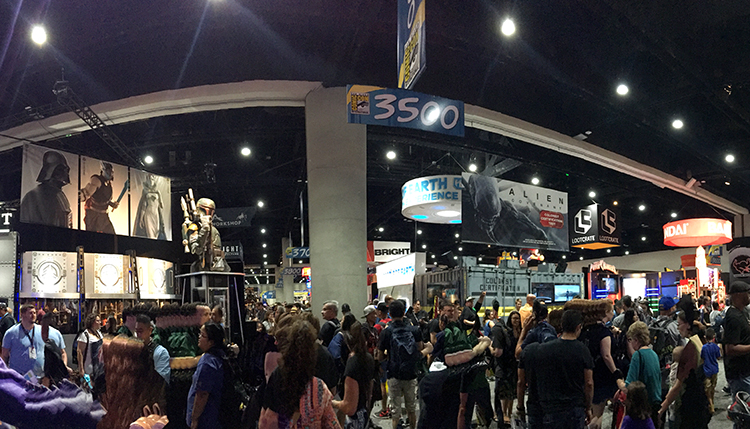 San Diego Comic-Con ended 3 weeks ago and we are still recovering from all the fun. From Preview Night to Sunday Night, there was never a dull moment. Inside and outside of the Con, there was fun to be had. Listed below is only a smidgen of the SDCC 2017 happenings. So, take a look at galleries, tweets and image clips of some of the fun that was going on during San Diego Comic-Con 2017.

From Hasbro to Marvel to AMC to Nickelodeon. The SDCC Exhibition Floor is a collector’s, gamer’s, aspiring artist’s playground. It’s a place to learn about a new show or visit show booths to get the swag or a particular exclusive. Whatever tickles your fancy, you will find it there. You’ve got Artist Alley for picking up an unfamiliar comic or graphic novel or visiting an artist booth for purchasing a commission or just chat with the artist/writer about their projects. Then there is the video game area for testing out the latest game or game yet to be released. You can also pre-order games. Then there are the show booths. Like, the STARZ Outlander Print Shop Booth. Where one had a chance to have their own custom Outlander shirt made in the printing press, as well as a large branded tote bag, bandana, and Comic-Con exclusive poster print.

National Geographic and Nerd Nite celebrated the new series Mars and One Strange Rock. It was an evening of entertainment yet thought-provoking presentations– all while the audience mingled along in a casual atmosphere. Speakers were present for 15-20 minutes each on a fascinating subject, often in an uncanny and unconventional way. There was free food and an open bar featuring themed drinks. Following each presentation was a brief Q&A with the audience.

Besides the fan parties, SyFy was all over SDCC this year with Superfan nuptials, trivia trolleys, cosplay repair carts, a SYFY drumline and THE by-invitation-only annual Friday night party hosted by Zachary Levi. Still, can’t figure out how to get into the tone.

Now, THIS was my favorite SDCC 2017 party. Catered pop-culture-inspired food, open bar and, free Pepsi Fire for those that did not drink alcoholic beverages. And Wookie Cookies and Pepsi Fire Ice Floats for dessert. Plus, we enjoyed a performance by Big Boi (He performed a 24 song setlist!) and participated in festival-inspired activities. Also celebrity spottings such as Parisa Fitz Henley (Midnight, Texas) and Dylan O’Brien (The Maze Runner).

SDCC attendees had the opportunity to immerse themselves into the world of The Tick at Amazon Prime Video’s Tick Takeover, a movie set level design experience positioned directly across from the San Diego Convention Center on MLK Promenade (on the corner of 1st and J street). With fully built out buildings from “The City,” a twenty-foot tall animatronic Tick head and “Easter eggs” harkening back to the show, The Tick Takeover was poised to give fans the journey of a lifetime.  Each “Citizen” left this enveloping SDCC highlight feeling more connected to the Amazon Original Series than ever before.

There was a challenge-based scavenger hunt. Citizens were asked to help the two main protagonists, Arthur and The Tick, take down a group of evil-doers and prove that they too can be heroes. The multi-room experience took place in four locations essential to the series storyline – Goat’s Deli, Arthur’s Apartment, The Warehouse, and The City Police Station.

An Amazon Prime Member Lounge was setup with a comfortable, cool environment where Citizens had the chance to experience Amazon Prime benefits as they stream the pilot episode of the Amazon Original Series, The Tick. Attendees also unlocked digital badges hidden within the space to win exclusive promotional items.

And during SDCC, Citizens were able to call upon the #TeamTick street team for help when they were in a bind. In true Tick form, Team Tick took to the streets of San Diego helping the helpless and defending the defenseless. Citizens who sought assistance from the street team needed only to flag down a member of Team Tick, adorned with blue antenna, to get help for their distress.

Season one of the new Amazon Original series, The Tick is streaming on August 25, exclusively on Amazon Prime Video.

The Expanse Escape Room combined the near-future world of The Expanse with a thrilling race against the clock to escape from a dangerous spacecraft. In the room, we recovered samples of the dangerous but invaluable “Protomolecule” before time ran out and our derelict spaceship suffered a total systems failure. With actual props from the set of The Expanse, authentic prizes were awarded to escapees, and personalized Expanse cinematographs for all attendees; The Expanse Escape Room is the closest fans got to joining the crew of the Rocinante. My team escaped from the room with 8 minutes remaining!

FX delivered SESSIONS: THE LEGION MIXED REALITY EXPERIENCE – powered by the Microsoft HoloLens – and its critically-acclaimed series, Legion, to life at FXHibition. The HoloLens transported fans into the headspace of the show’s lead character, “David Haller,” where they interacted with his world and tested the boundaries of their own reality. 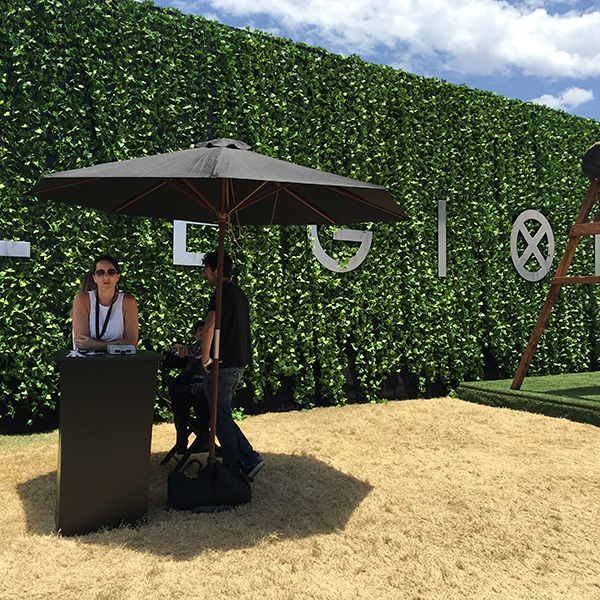 SDCC attendee fans who were eagerly anticipating the long-awaited Blade Runner sequel, Blade Runner 2049, had a once-in-a-lifetime opportunity to step into the unique world of Alcon Entertainment’s new film, months before its October 6th theatrical release. Located in the heart of San Diego’s famed Gaslamp Quarter, the Blade Runner 2049 Experience replicated the movie’s setting, complete with the unique sights, sounds, and atmosphere of Los Angeles, circa 2049. Presented by Alcon Entertainment and Johnnie Walker.

The actual Spinner from the new film was on display, along with other vehicles featured in the film. Costumes worn by the stars of “Blade Runner 2049” were also displayed, and actors dressed in wardrobe from the film walked amongst the crowd, furthering the sense that guests have stepped into the Los Angeles of the future.

In addition, fans got an exclusive peek of the limited-edition Johnnie Walker Black Label The Director’s Cut bottle, inspired by the original, elusive prop from the first film. Guests 21 and over enjoyed a Johnnie Walker whiskey tasting experience.

Opening on October 6, 2017, in 2D and 3D in select theatres and IMAX, Blade Runner 2049 is a presentation of Alcon Entertainment and will be distributed domestically by Warner Bros. Pictures, a Warner Bros. Entertainment Company, and internationally by Sony Pictures Entertainment.

Lastly, and certain not least. THE longest line wait. Well, one of the longest line waits was for the Game of Thrones Experience. Upon entering the “winterized” entrance, fans were registered with their own Dragonglass RFID wristband that captured each touch point of a fan’s journey throughout the activation, producing individual links with ready-to-be-shared pieces of content. The journey took fans through Winterfell, Dragonstone, King’s Landing and North of the Wall.

Every guest that went through the experience was given an exclusive SDCC Night King Funko Pop! Figure, a t-shirt featuring the Night King key art and an exclusive Robert Ball Episode 701 mini-poster. FOLLOW @WeAreSecondU on Twitter every Sunday, 9 pm EST for a LIVE Tweet of Game of Thrones.

Overall, this year’s Con was a ton of fun! Mark your calendars…Next year’s dates have already been announced for July 19-22, Preview Night July 18. If you are attending SDCC for the first time next year, the first thing to do is to create a Member ID. A Member ID is needed in order to be eligible for Open Registration and will get you on the official CCI email list for updates. Keep checking our site as we countdown to San Diego Comic-Con 2018 and help you to prepare.

After the sensational curtain raiser of last week, it would have been understandably difficult to maintain the pace …