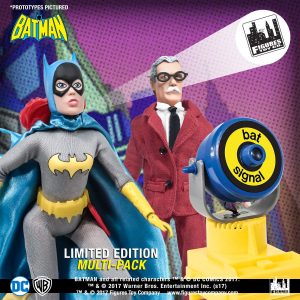 There’s a lot in stock and even more in store for fans of Figures Toy Company’s retro figure offerings!  A few of your favorite DC Comics heroes are now available as Limited Edition Exclusives, while several DC characters will make their retro figure debut at FTC very soon!  Here’s what you can find in stock now at FTC!
A Limited Edition (only 50 pieces!) Bat-Signal set featuring the popular Batgirl retro figure, an exclusive Commissioner Gordon that is only available as part of this set, and a fully functional Bat-Signal accessory!  Bat-fans are already buzzing about this one, and it’s limited quantities make it even more appealing to hardcore collectors! 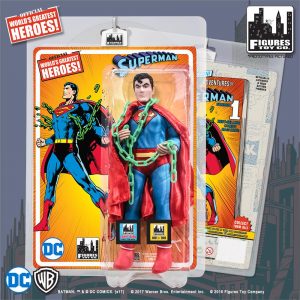 The Man of Steel has made his way back to FTC despite the Kryptonite chains that were holding him down!  Figures Toy Company’s new Superman figure depicts the legendary hero as he appeared on Neal Adams’ famous cover art for Superman #233.  This release features a new head sculpt for Supes, and comes with “Kryptonite” chain accessory.
Coming soon to FTC is a new series of retro style Super Powers figures, each with Fist Fighting action!  Inspired by the Kenner releases from the 80’s, this latest set features the first ever FTC releases of Firestorm, Dr. Fate, and Red Tornado!  The new series of Super Powers figures is due out this fall, and further information on release, including pre-order info, will be made available in the coming weeks.
If all that news isn’t enough, you can visit Figures Toy Company for even more terrific toys!  Their huge stock includes figures of your favorite DC Comics characters, the stars of your favorite Hanna Barbera cartoons, KISS, and the most popular talent in pro wrestling today!  Be sure to look for additional updates on your favorite FTC toy lines right here at Second Union!

To coincide with the release of the latest installment in the Star Trek film franchise this July, Funko will …

MezcoToyz is well known for putting out amazingly crafted, intricately detailed action figures, and this figure is no …