Erik Estrada and Larry Wilcox keep busy in Hollywood these days, impressive when you consider the fact that the television program that made them household names, CHiPs, went off the air more than 20 years ago. Wilcox was an executive producer for The Ray Bradbury Theater and Estrada supplies voices for animated characters on Adult Swim. This September, however, the boys are taking time out of their busy schedules to meet and greet their fans, sign autographs and pose for photographs. Fans of CHiPs have something to cheer about. Actors devoting time for their fans is commendable, by all measures.

For twelve years the Mid-Atlantic Nostalgia Convention has been growing steadfast in attendance… an oddity in an era where Comic Cons are becoming the norm. At MANC, the average age of an attendee is 59, according to a recent poll at last year’s convention. “It’s as if the hotel is filled with 80-something teenagers,” remarked Bill Huskin, who displays Hollywood memorabilia at the event. “As a vendor at the Baltimore Comic Con, it still baffles me that the attendance at these two events is like night and day. And that’s a good thing because I sell collectibles that teenagers would have no interest in.”

The reason for the aging fan base has something to do with the novelty of the event. Like many conventions, there are slide show seminars, hundreds of vendor tables offering a variety of merchandise, Hollywood celebrities signing autographs for fans, and a movie room that runs 24 hours a day. But the theme of the event is focused on the by-gone era where Leave It To Beaver, Perry Mason, and Gilligan’s Island were the top-rated programs. Dawn Wells, who played Mary Ann on Gilligan’s Island, will be among the celebrity guests this year. A recent spokeswoman for Me-TV across the country, which airs episodes of Gilligan’s Island in reruns, Wells loves to pose for photos with her fans.

“The purpose of the event is to also provide a platform for authors, historians, and film preservationists to present slide show seminars of recent archival findings,” explains Michelle Vinje, one of the volunteers of the event. “Museum curators, magazine editors, bloggers, film preservationists, and historians come to the show every year to learn something new… about something old. When author Garyn Roberts delivered a slide show presentation on the history of Dick Tracy, we saw photographs that had never seen the light of day in decades. Daws Butler, who voiced many Hanna Barbera cartoon characters, was almost forgotten by the mainstream public until author Joe Bevilacqua gave us a look at Butler’s personal life and a review of his career.”

In short, the event is more than an autograph venue… MANC is a highbrow affair for the mainstream fan base. Here, you can hob nob with the preservation curator at the Smithsonian, the editor of national film magazines and producers of commercial DVDs. If you ever heard audio commentary on a commercial DVD or BluRay, you might be surprised to know audio commentary is not always recorded in a studio. Many times celebrities devote an hour or two in a hotel room during late hours to provide commentary for up-coming DVD releases at this very event. The convenience of a cast reunion in one venue is a financial advantage for a producer looking to cut costs.

The movie room screens rare television programs and movies — in a similar manner to that of the Turner Classic Movies Film Festival. This year’s offerings including World War II cartoons, the 1949 unaired television pilot of You Bet Your Life, a 1954 live telecast of James Bond with Barry Nelson in the role (years before Sean Connery played the part), the first few chapters of the 1928 silent serial, The Mysterious Airman, which was considered “lost” until a recent restoration was funded by The Sprocket Vault, and Joe Palooka film shorts with Shemp Howard in the cast. Of course, films with the weekend celebrities are also included. Gary Conway, star of Land of the Giants and Burke’s Law, will be highlighted with a screening of those television classics, along with I Was a Teenage Frankenstein (1957) — Conway played the title role. “I go to the Turner Classic Movies Film Festival every year,” says Crystal Benton, a frequent attendee. “MANC is not the same type of event because movies are not being shown in a historic movie palace, but this is the closest thing to the Turner Classic Movies Film Festival for those of us who live on the East Coast.” 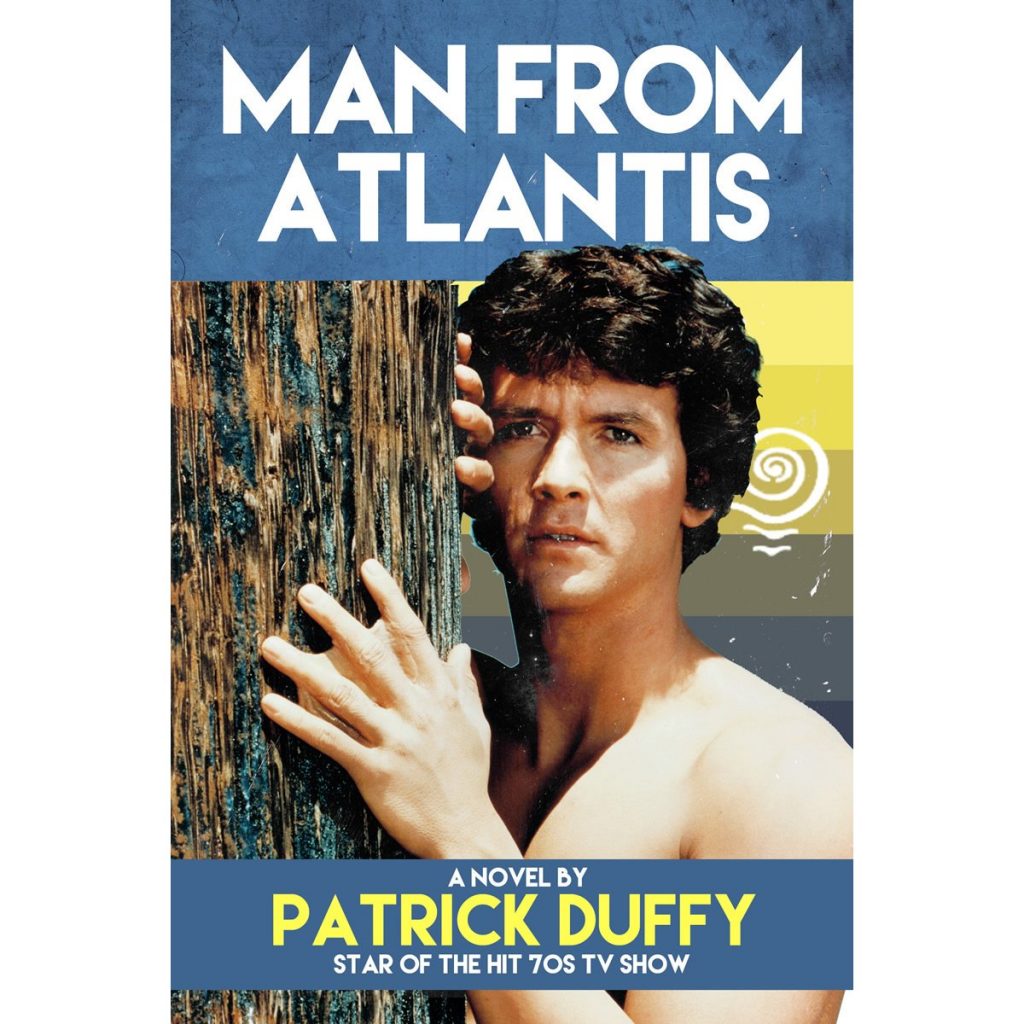 Patrick Duffy and Belinda Montgomery, stars of The Man from Atlantis, will be attending the convention. Not only will they be on stage talking about their screen careers, but the pilot movie for the short-lived television program will also be screened. Considered by many as a copycat of Submariner and Aquaman, the science-fiction program of the late seventies is still raved by fans. Duffy also wrote a novel based on the television series and will be signing copies of his novel during the weekend.

Fans of Shirley Jones will appreciate knowing she is making an appearance at this year’s convention. The star of Oklahoma!, Elmer Gantry, The Music Man and The Partridge Family will be signing autographs on DVDs, posters, glossy photos and other memorabilia. Aileen Quinn, the star of Annie (1981), will make a lot of young children happy, along with their parents who grew up with the musical.

Cindy Williams from Laverne and Shirley and American Graffiti will be signing autographs as well. Few know that Williams was once up for the part of Princess Leia in Star Wars and lost out to Carrie Fisher. Other celebrity guests will include Larry Storch (F-Troop), Paul Petersen (The Donna Reed Show), Tammy Locke (The Monroes), Bond girls Maryam d’Abo, Maud Adams and Max Vesterhalt, and many others.

Among the highlights of past conventions was a Bionic cast reunion with Lee Majors, Lindsay Wagner, and Richard Anderson, with a full hour Q&A on stage with the actors telling behind-the-scenes stories. Davy Jones took time to sign autographs for fans and upon learning one fan turned 16 that day, promised to dedicate a song to her late that night during a local concert. When Patty Duke attended the convention, she found herself recording voice greetings for people’s smart phones: “Hi, this is Patty Duke. So-and-so cannot get to the phone right now but if you leave a message…” Robert Conrad made one of his rare East Coast public appearances for fans last year and was signing until 8:30 in the evening, insisting he would not leave until every fan who came to see him got his autograph.

The events co-ordinator for the Mid-Atlantic Nostalgia Convention is a professional bean counter. Statistics, demographics and other factors are taken into consideration when choosing what types of slide show panels and celebrities are chosen for the convention. Statistically, MANC has more people attending every year and the growth rate itself is growing. According to Michelle Vinje, almost all decisions are based on what the attendees would like to see. “We took ourselves out of the equation,” she explained. “If we are on the fence whether or not people would like to meet a specific celebrity, we poll them on Facebook and let the votes take action. But we also noticed the most popular complaint from fans who frequent conventions is the pricing structure. Check Facebook under other events such as Comic Cons and fans are pressing disappointment over the $40, $50, $60 and $70 autograph fees and photo ops. Most people make $10 an hour. Before taxes. They do not have the discretionary funds to slap down thick envelopes of cash on a single weekend. And worse, the celebrity gets a bad rap and their image scarred when you read the comments Facebook. So we have made sure that celebrities at our event are not charging an arm and a leg. We kind of applied the Amazon and Wal-Mart approach of scaling the costs back and as a result, our attendance is growing and celebrities break records. It is all about the fans.”

If you have never been to the Mid-Atlantic Nostalgia Convention, consider going this year. More of a throwback to what conventions used to be before the days of cosplay and $40 admission tickets, admission is a cheap $15 and every attendee gets a free magazine-sized, full-color program guide. And you have the opportunity to watch a rare film, experience a superb slide show presentation, and have your photo taken with a celebrity to post on Facebook.

The dates are September 14 to 16, 2017, at the Hunt Valley Delta Hotel. For more information call 443-286-6821 or visit the convention website: www.MidAtlanticNostalgiaConvention.com

Streaming Service Will Bring the Best of Dragon Con’s Panels, Costume Contests, and Other Events Directly To Your …