REVIEW: “Guardians of the Galaxy: The Telltale Series” – Episode 1: ‘Tangled Up In Blue’

Ever since the launch of Batman: The Telltale Series in 2016, the game studio has been cranking out the games like crazy. Ever since the launch of that series, they’ve released The Walking Dead: A New Frontier, Minecraft: Story Mode Season 2, Batman: The Enemy Within, and Guardians of the Galaxy: The Telltale Series. The Guardians have gotten plenty of buzz since 2014’s film, but Marvel has never had a Telltale game before. Is it any good, though? Problems aside, yeah, it is. 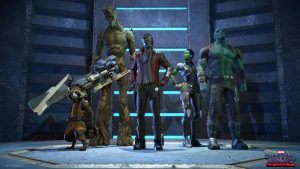 The episode begins with the Guardians assigned a mission to intercept Thanos in a Kree temple. After finding him holding an artifact called the Eternity Forge, the Guardians attack Thanos and end up killing the Mad Titan. After celebrating their success, they learn more about the artifact and find that it can bring the dead back to life. A Kree warrior named Hala wants it for herself and her dead army, who are in pods, waiting to be restored.

As can be expected in a Telltale game, there are plenty of choices that will dramatically alter the course of your story depending on what you choose. While there aren’t many that will seem to have an effect later on in the story, there are plenty that will test Star-Lord’s relationship with the rest of the crew. As of right now, it’s not hard to pick the choices that are the right ones, but I can only imagine what Telltale has in store the next few episodes. 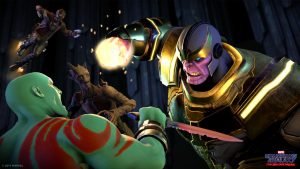 The voice acting is pretty good, especially Nolan North as Rocket. Every role this dude is in, he kills it. Everybody knows he’s one of the best voice actors of all time, but I might as well strengthen that point even further. The framerate is also solid and the animation is stunning. The skin on all of the characters is lifelike and very impressive.

So far, the story is very compelling and I can’t wait to see what comes next. I should have the reviews for episodes 2 and 3 up soon. There are some cheesy moments in the writing, and they honestly made me cringe, but the rest

Guardians of the Galaxy: The Telltale Series‘ first episode is a blast. While the music certainly isn’t as much of a standout as the films, and the writing is cheesy and bland at times, the story, pacing, voice acting, and animation are perfect. I’m going to give it an 8.5/10.

Guardians of the Galaxy: The Telltale Series is available for PS4, Xbox One, and PC.

Rule of Rose, Haunting Ground, and the Clock Tower series are great horror games with a lot in common. …