If you haven’t already, read the previous article for “Fish in the Jail House”.

After a very trying week, The Defenders have reached the final stage of their battle against the Hand. Their plan is to blow up the Midland Circle building before the Hand removes eternal life from the skeleton of an ancient dragon that’s buried below Hell’s Kitchen. According to Gao, it is the source of the Substance.

Within the dragon’s ribcage, Gao is telling Elektra she should believe her now and explains the history of the dragons. How they need to focus on digging up the substance quickly before the infrastructure of New York crumbles. Danny listens to their conversation from behind a giant rib bone.

Claire and Colleen search and find the ground level area Raymond was going to blow up to cause the building to fall, while Jessica, Matt, and Luke find an elevator to move down to the floor level. Meanwhile, above ground Misty learns the explosives were stolen and realizes what’s going to happen. Her captain order the surrounding buildings to be evacuated and summons the bomb squad. Misty calls Claire and hears scuffling in the background, she begins searching for a way inside the building.

Back at the Harlem Precinct, Trish and Karen talk about the craziness, their friends, and are trying to hunt down the truth. Foggy shows up saying he heard a radio calling all cops to Midland. That’s when Trish realizes that’s the center of everything.

As Danny starts taking down Hand minions, Gao interrupts him, calling him a naive child. The other three Defenders find and enter the secret elevator and come face to face with more Hand minions. Claire and Colleen find the right place to start setting up the bombs and wait to set the timer until the Defenders all get back with Danny. But Bakudo shows up and Claire fights him. Misty shoots her way into the building. One of Gao’s minions is about to murder Danny, but Elektra stops him, thinking Danny might be more useful alive.

Using his super-human hearing, Matt hears the Hand minions prepping weapons at the bottom of the hole. Luke comes up with an idea Jessica won’t like. Jessica is seen descending from the elevator alone, asking to talk and saying she doesn’t want to fight… alone. Luke and Matt come out of the dark and the final battle begins. 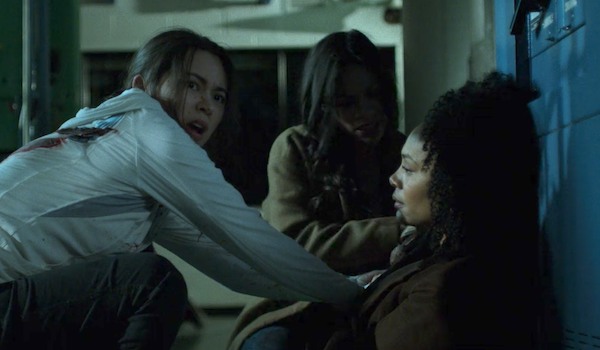 As Bakudo belittles Colleen, Claire knocks out his soldiers with a wrench. Misty makes an entrance and points a gun at Bakudo. Bullets do nothing. He tells Colleen he’ll kill them both to show her where she belongs to him. Misty tries to karate chop him, but not before he cuts off most of her right arm.

Colleen reacts by cutting off his head resulting in the body dropping onto the detonator and starting the counter.

In the hole, Matt hears the bomb and tells the others to leave without him. He believes he can still reach Elektra. The others leave and are soon attacked by Hand minions on their way up. Luke has a one on one with Murakami and tosses him down a shaft. Matt and Elektra fight, trading words back and forth. He tells her he still believes the real her is still inside her. She vows this IS the real her. She throws a dagger which stops the elevator our other three heroes are on. But not before it falls then suddenly stops. Jessica is holding the elevator with her bare hands! They climb out and meet up with Colleen in the lobby.

Back down below, Elektra and Matt exchange romantic banter and continue to fight. Each of them trying to recruit the other to their side. They share one last kiss before Midland Circle blows up and crashes down on them.

After the aftermath, the gang tries to go back to normal life. Foggy lets Luke and Claire know they aren’t in any sort of legal trouble then he meets up with Jessica in a bar. They talk vaguely about their past and both say they should keep in touch.

Colleen visits Misty in the hospital and lets her know Danny owns the hospital so she will be well taken care of. After, she visits Danny back at the dojo. Danny tells Colleen he feels New York is starting to feel like home. Jessica praises Malcolm covering up bullet holes and is proud of her fixed office door. Foggy and Karen meet at Matt’s old church to grieve the loss of Matt together.

The Iron Fist is shown perched on top of a building in a Daredevil pose.

Official Synopsis: Woody has always been confident about his place in the world and that his priority is …

Out of all of the genres of film, the one that intrigues me the most is science-fiction. I’ve …