An INTERVIEW with RICK GOLDSCHMIDT: Historian and Biographer for RANKIN/BASS Productions

For almost 60 years, Rankin/Bass Productions has entertained children of all ages with their beloved holiday-themed television specials. Founded by Arthur Rankin, Jr. and Jules Bass in 1960, as Videocraft International, Rankin/Bass is most widely known for their work in stop-motion animation. Producing such heartwarming classics as Rudolph the Red-Nosed Reindeer, The Little Drummer Boy, Santa Claus Is Comin’ To Town, The Year Without a Santa Claus, and Rudolph’s Shiny New Year.

They also produced a number of traditionally animated specials like The Cricket on the Hearth, Mouse on the Mayflower, ‘Twas the Night Before Christmas, and the highly popular Frosty the Snowman.

The list goes on and on; the popularity and appeal of the vast work produced by this ground-breaking production company are still evident today as the majority of these now classic programs are still broadcast, all over the world, every holiday season. Rankin/Bass holiday merchandise, ie. Rudolph the Red-Nosed Reindeer and Frosty the Snowman is still wildly popular and highly sought after as well.

Rick Goldschmidt is the official historian and biographer for Rankin/Bass Productions. He has published several books on the subject, including THE ENCHANTED WORLD OF RANKIN/BASS: A PORTFOLIO, THE MAKING OF THE RANKIN/BASS HOLIDAY CLASSIC: RUDOLPH THE RED-NOSED REINDEER, MAD MONSTER PARTY (MISER BROS PRESS), and THE ARTHUR RANKIN, JR. SCRAPBOOK: THE BIRTH OF ANIMAGIC. We recently had an opportunity to chat with Rick and ask him a few questions about this monumental endeavor he’s undertaken.

Rick, first and foremost, could you tell our readers a little bit about yourself and how you came to be involved with Rankin/Bass?

Well, it was sort of a calling. An unexpected one at that. My degree is in Art/Illustration and I admired the work of Jack Davis and Paul Coker, Jr. as I graduated from college. I would call Jack Davis up on the phone and discuss his work and get pointers, etc. After watching Rankin/Bass’ Mad Monster Party again, I realized Jack designed the film. I had always wondered what happened to Arthur Rankin, Jr. and Jules Bass. I asked Jack and he said he was still doing work for them and to call Paul Coker. I did and Paul gave me Arthur’s # in Bermuda and I called him up and told him I wanted to do a book. I hadn’t the slightest idea of how to do such a thing, but something told me I should do it. Arthur said, “Send me two Chapters.” I did and then he sent me his whole life story on a mini-cassette tape.

What is involved in being the historian and biographer?

Early on, it was picking people’s brains that worked with them. The great stars like Phyllis Diller and Art Carney. I talked to the core people involved in the making of the specials, Arthur, Jules, Maury Laws, Don Duga, Tony Peters, Billie Mae Richards, June Foray, Robie Lester. Jack Davis, Paul Coker, etc. etc. Not only did I get lots of information and source material from everyone, but I became a trusted friend of all. This in itself, was a great reward for me. Arthur became like a second father to me. Then I had to dig up all of the photographs, art, collectibles, etc. They did not save very much, so it was a great deal of work. Today, it involves many appearances, interviews, photo licensing, self-promotion, etc. It is very time consuming, but I still enjoy it! I now get to do fun things like appearing at The Shag Stores with my friend Shag. He did a gorgeous painting/print for the 50th Anniversary of Rankin/Bass’ Mad Monster Party! Talk about fun appearances and memorable occasions.

Tell us a little bit about the relationships you’ve made during the course of this project. Favorite memory?

I have many great memories. One of my fondest is going to New York and appearing with Arthur at the Museum of Television and Radio in 2003. You can find this on YOUTUBE. I got to spend time with Arthur, Masaki Iizuka, Peter Bakalian, etc. I did a book signing there with the Red Skelton “Father Time” puppet and there was a long line, which made Arthur very happy. He was touched by the audience. This was his Academy Award. He threw a big party upstairs in the museum afterward, that had unbelievable catering and he had me sit at the head of the table. He really appreciated what I did always and honored me on several occasions.

We know that Arthur Rankin Jr. passed away in 2014, do you still keep in touch with Jules Bass today?

I have heard from Jules, but he prefers to stay out of the Rankin/Bass limelight. He works on Children’s books and is trying to launch a Broadway musical. He preferred that Arthur do all the talking about their Rankin/Bass career and he did just that for many, many years. When Arthur passed, I handled all of the obituaries in the various papers and spoke at his Memorial on his Birthday in Bermuda. We had a pretty special friendship. In fact, he knew I cared about his career as much as he did and I think I may have been the only person he could turn to for that kind of care of his body of work.

What do you think is your main mission with this endeavor?

My main mission is to make sure the creative people aren’t forgotten. Now that huge companies have taken over their television specials and films, they tend to get away from the name Rankin/Bass and call it something generic and quite frankly stupid, such as “The Christmas Classics.” Many generations of people grew up watching these shows with the Rankin/Bass logo and jingle at the end of the specials. Why would you want to shy away from that identification? It boggles the mind, but they started doing this around 2003 and it made Arthur very angry. So much so, he had CLASSIC MEDIA remove his introduction to Rudolph and Frosty from the DVDs. It is like calling a Walt Disney film “The animation classic.” My books, interviews, etc. all bring the focus back on Arthur Rankin, Jr., Jules Bass, Romeo Muller, Maury Laws, Paul Coker, Jr., etc. These are the guys that have made entertainment that has lasted over fifty years!

Who is your favorite character?

I like the monsters like the Abominable Snow Monster. I like all the big Animagic figures and all the characters in Rankin/Bass’ Mad Monster Party. My favorite scene in that is the drugstore scene, with Mr. Cronkite and Felix. I like the early Animagic look designed by Tony Peters in Rudolph and also Willie McBean and His Magic Machine (A 1965 feature film). I enjoy their work from an artist’s standpoint and design is very important to me.

Which program do you suppose you’ve watched the most times over the years?

Definitely Rudolph. I have it on repeat at some of my appearances with the commercials. I have been doing a tour of Hallmark stores this Holiday season and I show it about 4 times with the commercials during these appearances. I love so much of their work though. I try to watch everything during the year. They have something for every month of the year. Their Animagic, done in Japan by animators Tad Mochinaga, Hiroshi Tabata, etc. is my favorite and what they are known for. 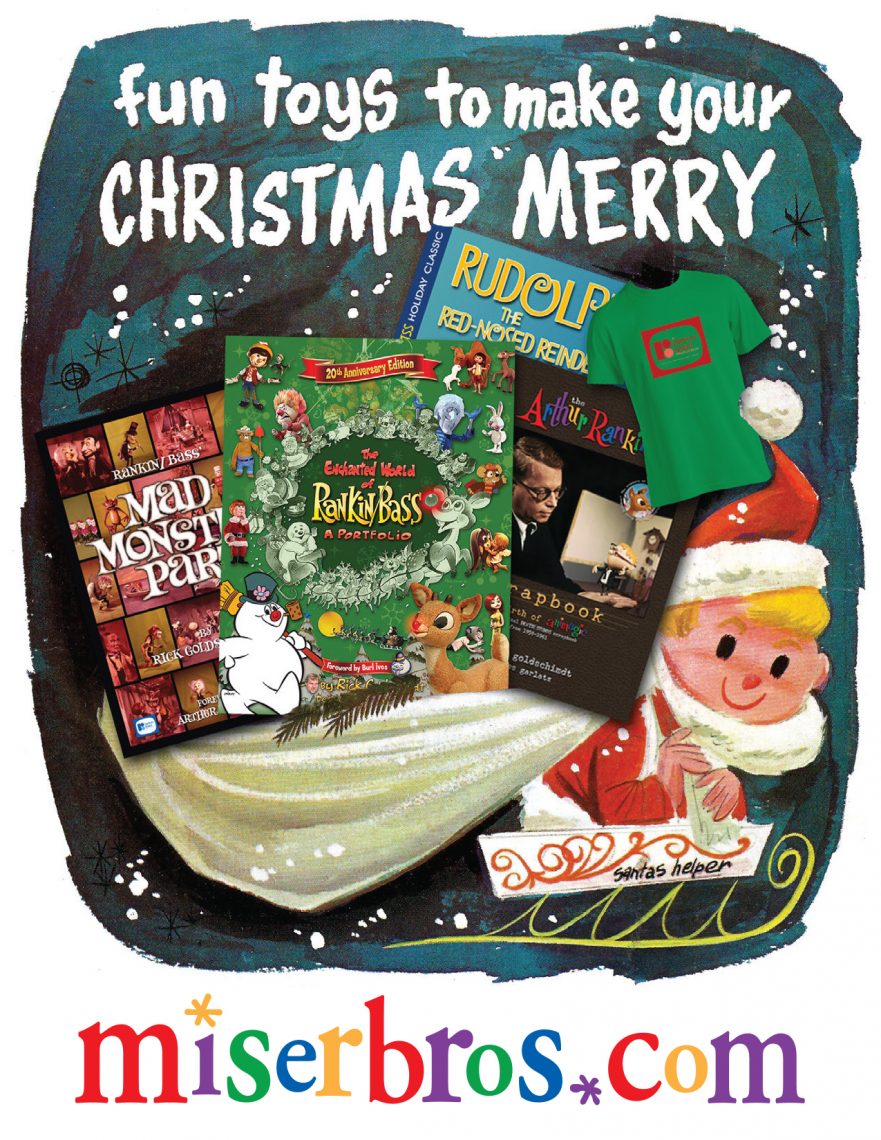 What does the future hold for Rick Goldschmidt and Rankin/Bass?

More interviews and mail packing for sure. I will be appearing at the Hollywood Show in Chicago for the first time and the Mid-Atlantic Nostalgia Con (Making two presentations). I plan on returning to Chiller Theatre (which is always my best show) and I may be back at The Shag Stores this Halloween. I have been talking about doing a “Making Of” book on Rankin/Bass’ Santa Claus Is Comin’ To Town. I am enjoying my busy time of year right now, so you never know.

Thank you, Rick, we sincerely appreciate you taking time out of your busy day to spend with us!

The X-Perts investigate the long history of ’90s creation: GAMBIT! He appeared suddenly in 1990. However, Gambit has …