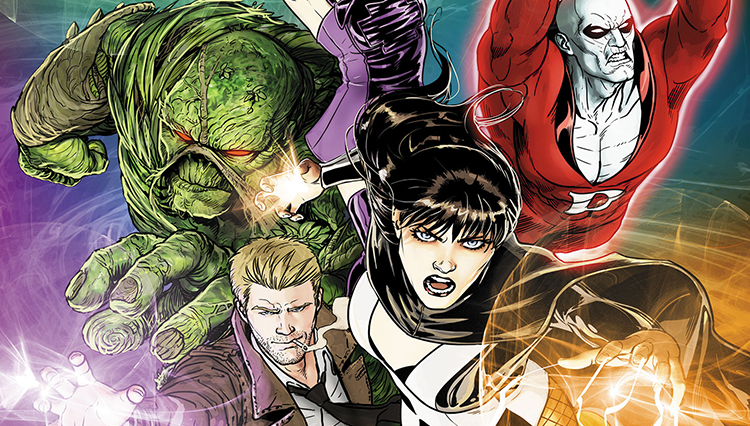 Joseph Kahn, director of DETENTION (2011) and perhaps more notably, TORQUE (2004) pitched a JUSTICE LEAGUE DARK film to the good folks over at Warner Bros/DC. While it seems his pitch didn’t gain much traction (at least not yet), the visionary director took his campaign to Twitter sharing his pitch with the masses. Perhaps the most upsetting thing about the concepts Kahn has shared is that they are absolutely brilliant in nearly every aspect, from conceptualization to his choices for the cast.

For the uninitiated, here’s a little background information on who and what Justice League Dark is all about:

SWAMP THING is – Alec Holland, the ill-fated scientist whose consciousness was reborn as a plant elemental.

THE HELLBLAZER – John Constantine, although we’ve had a couple of renditions of Alan Moore’s occult detective, Kahn’s version looks to take him back to his roots.

Some of these have my wishlist for actors at the time. Here’s Constantine. pic.twitter.com/byFjYlhSus

ZATANNA – Zatanna Zatara is a powerful magician and the daughter of Giovanni “John” Zatara (formerly a member of the Justice League). Zatanna always seemed like a tough character to bring into live-action but now that Doctor Strange has debuted, and the Harry Potter series is back (sort-of) perhaps audiences will be more open to the concept.

Zatanna. She does wear a top hat with this. pic.twitter.com/v61rsS6QOM

Deadman – Boston Brand, is the ghost of an assassinated acrobat who can possess the bodies of the dead.

Jason Blood – He’s the human host of Etrigan the Demon. Blood’s has lived for centuries formerly a knight in King Arthur’s court, a curse has bound him to Etrigan for all eternity.

Here’s a look at the team of anti-heroes as they appear in the pages of DC comics.

Contributing Editor at Second Union
Born and raised in Southern California, Jamel Singleton is a lifelong kid-at-heart with a passion for fantasy novels, movies, TV, and video games. It was his overwhelming love of video games which prompted Jamel to co-create a gaming blog for the local paper. Eventually blogging led to a podcast, and podcasting led to him becoming Contributing Editor for Second Union.

Official Synopsis: Warner Bros. Pictures’ “Fantastic Beasts: The Crimes of Grindelwald” is the second of five all-new adventures in …

As each episode of American Gods goes by, it seems the level of quality is showing no …