In celebration of all 8 Harry Potter films streaming on the HBO network, HBO kicked off their 3 cities Hogwarts House Challenges event in Atlanta last week Thursday, January 18th and Second Union was there to participate in the magical affair! We also spoke with HBO Director, Loraine Anderson about the celebration of the Harry Potter film series joining HBO’s magical programming line-up. Lorraine expressed her excitement on HBO being the first network to air all 8 Harry Potter films with no commercial interruptions.

The grand area of the Georgia Railroad Freight Depot was transformed into Hogwarts’ Great Hall. As lucky registrants entered the hall, guests were sorted in their choice House and given a house card with a table number to be seated at a table of 10. Guests were handed a Milk Chocolate Frog treat that also included a collectible wizard card inside the packaging. Original props from the Harry Potter films were also on display for viewing.

The event was fabulously catered with lots of delightful delectables. Savory bites and mouthwatering desserts. Once the reception ended and everyone was in their seats, the Harry Potter Game Show began! Each table of 10 had to vote on a team table captain and then come up with a team name. Each team table was given an electric device which would be used to answer Harry Potter/HBO trivia questions. There were also group challenges to complete, group photos and senior pictures. The table with the most points wins! In addition, prizes for Best Costume/Dress, Best Team Photo, and Best House were given out.

Overall, HBO hosted a fantastic event! If you wizards will be in Boston January 25th or Denver January 31st, be sure to keep an eye on HBO’s Facebook page for tickets opportunities. #HarryPotterHBO 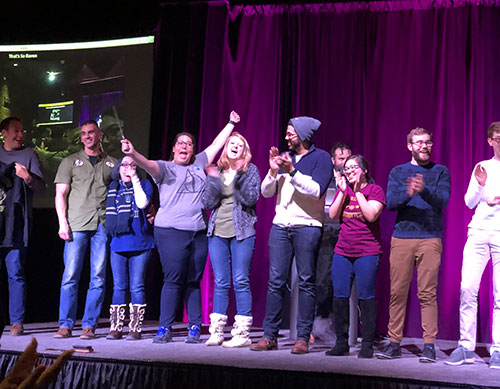