REVIEW: The Toys That Made Us 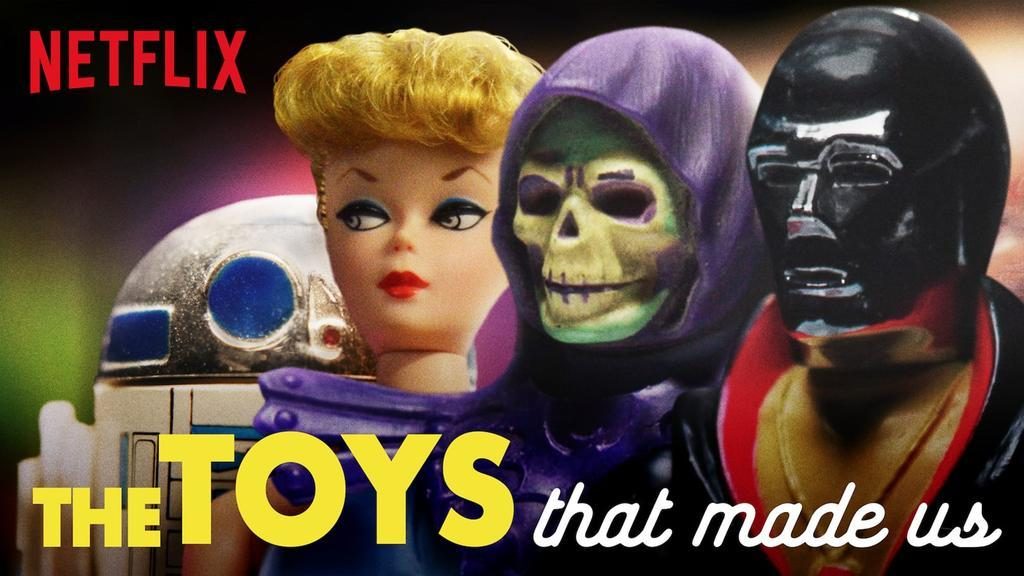 One of the drawbacks to not allocating enough time to watch TV is the near constant criticism of your Geek Street Crew around the office coffee machine. The documentary series “The Toys That Made Us” debuted on Netflix in December  2017 and I have only recently had the distinct pleasure of sneaking in a couple of episodes. If you are a geek of a certain age, then this series ticks all the boxes; it’s as if our hive-mind was decoded and tailor-made TV entertainment created.

There are currently only four episodes available: Star Wars, Barbie, He-Man, and G.I. Joe. Series creator and executive producer Brian Volk-Weiss has indicated that four additional episodes will be released in the summer of 2018: Transformers, LEGO, Hello Kitty, and Star Trek. (I will hide all TV remotes save for the one in my possession and watch the LEGO episode the instant it becomes available. Once complete I will return the extra remotes into general circulation amongst my family.)

Initially, I only planned on watching the Star Wars episode, because STAR WARS. But that episode was sooo good, so well done, so entertaining I decided to give the GI Joe episode a watch. Despite not being a Barbie or He-Man fan at all I plan on watching those episodes based solely on the high production values and sheer amazingness of the first two episodes I watched.

I won’t bother with a synopsis, but will just touch on a few of the many high-points in the Star Wars and GI Joe episodes:

The story behind how Kenner landed the Star Wars contract, and the details, is amazing and will knock you right out of your chair… so I recommend sitting in a bean bag to watch. It’s a story you’ve probably heard before: Star Wars was a big unknown at the time and considered to be a bit of a gamble. Through interviews with key former Kenner employees, we learn that they knew Star Wars was something special and had incredible potential. The episode is absolutely bursting with interviews with the toy designers and engineers who relate absolutely fascinating anecdotes about how Star Wars had a profound impact on their lives and the fortunes of the company. Fun fact: Remember the Jawa action figure with the cloth hooded robe? This was prototyped by Jim Okada (VP of preliminary design at Kenner from 1976-1978). He apparently was having some difficulty finding a suitable fabric for the “desert garb” of the Jawa until he noticed his own brown socks! As he relates it (and, hilariously, he butchers ANOTHER of his socks during the interview!) he quickly snipped off the end of his sock and fashioned a hooded robe for the figure prototype. Another fun fact: The first Star Wars figures were prototyped by kitbashing Fisher Price “Adventure People” figures!

I could easily go on and on… there is so much gold in this episode that I could spend a whole week writing about it. You’ll learn the sordid backstory of the “Early Bird Certificate” set and the origins of the Mini-Rigs! And so much more! (Like a glimpse inside the collection rooms at Rancho Obi-Wan)! But I have a day job, and dinner to make so instead I’ll just skip to the second episode I watched: GI Joe.

The story of GI Joe is a little more layered and complex. As you may or may not know, GI Joe existed in a couple of scales: the original 12-inch and the 1980’s 3.5-inch “reboot.” Interestingly, the term “action figure” was coined to ensure that no one would make the grave mistake of referring to the larger (Barbie-sized) GI Joe figures as “dolls.” (The horror!) With the onslaught of Star Wars toys, GI Joe’s fortunes declined. The political climate of the 1980’s and its spirit of patriotism provided the framework for the re-invention of the GI Joe toy line and their scale was inspired by the Star Wars toys!

As a kid in the ’80’s I had an inkling that the relationship between the toys and figures was pretty cozy— indeed one of my ways of figuring out if there were new characters headed for the shelves was reading through the copyright information at the bottom of the front page. If I spotted a trademarked name that I didn’t recognize… there was some new GI Joe stuff coming soon! Oh, joy! It turns out that the GI Joe comic book was a key component of the 3.5-inch toy concept. So Hasbro toy designer (and military buff) Ron Rudat churned out the character designs, and as he did that, low-level Marvel Comics editor and illustrator Larry Hama (“Nobody worked on toy books unless you were a total loser.”) took on the comic book creation. Spoiler alert! Hasbro initially hadn’t planned on a line of enemy toys for GI Joe to fight; it was Marvel editor Archie Goodwin that came up with the “Cobra Enemy” concept, apparently off the top of his head!

As with the Star Wars episode, the GI Joe episode is stuffed full (fuller!) with interviews and anecdotes from employees (both former and current) that worked on the property. My hands-down favorite detail from this episode was the reason behind Snake Eyes’ all-black super-cool stealth appearance: it was a cost-saving effort! The team was under pressure to reduce costs and they didn’t want to make all the figures “sucky” so they instead opted to remove all deco from ONE figure in the initial line up. And thus was Snake-Eyes minted in awesomeness.

There’s so much more:  the fascinating story about the 12-inch figures’ “deformed digit” and how that helped identify bootlegs; the Kung-Fu Action Grip; and the Grand Mother of all toys ever— 1987’s majestic USS Flagg aircraft carrier. Over seven feet long and a (then) insane cost of $109.99. (About $220 in 2017 dollars, adjusted for inflation.)

Were you a kid in the 1980’s? Did you play with toys? Then watch Netflix’s The Toys That Made Us. You’re welcome.

For bonus entertainment? If you have children, have them watch an episode or two with you and have fun explaining our primitive childhoods to them.

Official Synopsis: When a young nun at a cloistered abbey in Romania takes her own life, a priest …