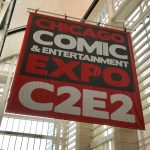 C2E2 2018 is now over, but the visitors are all still reeling from the excitement that occurred over the course of the weekend. Held at McCormick Place in spring, C2E2 is a place for all pop culture lovers to gather and celebrate their fandoms. Many come dressed in the outfit of their favorite character, hoping to snag a prize for their cosplay. Others focus on the endless panels and booths available to visit. Like it or not, it’s undeniable how big an impact C2E2 has had on Chicago’s pop-culture lovers, and people from all around the world come to see their favorite stars.

The entrance to McCormick Place could not be more packed for C2E2. The lobby is filled to the brim with fans of movie, television, and anime, seeking to enjoy the three days of pure entertainment. As you walk up the steps, an advertisement for Monster’s new soda, Mutant can be seen, doubling as an ad for the upcoming Deadpool 2. I got a chance to try all three flavors of Mutant at the booth, and they were all quite awesome, definitely contributing to my energy boost for the rest of Day One. 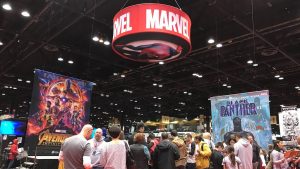 Marvel’s and DC’s booths were front and center, exhibiting their comics and graphic novels. Marvel had two enormous posters: one for the new Black Panther series written by Ta-Nehisi Coates. The other? The monumental entry in the Marvel Cinematic Universe, Avengers: Infinity War, set to release in theaters on April 27th.

Artist Alex Ross had a striking booth, complete with some of his most stunning artwork. Marvel, DC, The Beatles, and Universal Monsters all shared an area, making for a truly amazing appearance. While Mr. Ross himself was not there, but his artwork was definitely worth seeing in the flesh. 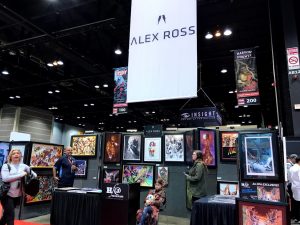 What stuck out the most with DC’s booth was the newly-released and upcoming collectibles. New Teen Titans Go! Funko POP! figures were showcased, along with some new Batman and Joker collectible figures. Speaking of collectibles, Diamond Select Toys previewed some new Avengers: Infinity War statues. These included Black Widow, Iron Spider, Thor, Black Panther, Captain America, Doctor Strange, and the Mad Titan himself: Thanos. These are set to be made available this fall. 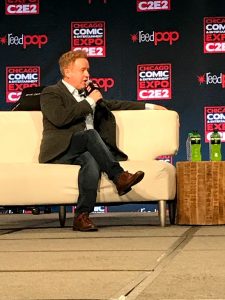 The first panel I visited was focused on Mark Millar, the author of graphic novels such as Kick-Ass, Kingsman, and Wanted. His company, Millarworld, was recently sold to Netflix, and he was able to talk about what was next for his books. He also gave some insight into his upcoming book, The Magic Order, Netflix’s first book. It goes on sale June 13th. He also revealed he is a huge fan of Thor: Ragnarok and Guardians of the Galaxy, which doesn’t come as a surprise considering his lasting impact on the Marvel Universe.

Meanwhile, I set out looking for some new Funko POP! figures to add to my growing collection. Word of advice: wait for Comic-Con to buy your Funko exclusives. I managed to snag a Thor (Gladiator Variant) from Thor: Ragnarok, a Marvel Collector Corps exclusive. I also picked up a PX Previews exclusive Ghost Rider, featuring his signature motorcycle, and Daenerys Targaryen on Drogon from Game of Thrones. Thanks to a local comic shop in Syracuse, New York, Cloud City Comics, who gave me an incredible discount on the Ghost Rider. Check out their Facebook page and be sure to pop into their store if you’re in the area!

The final panel of Day One featured two stars from Guardians of the Galaxy Vol. 2! Dave Bautista (Drax) and Sean Gunn (Kraglin) made an appearance for the fans and answered questions regarding everything from director James Gunn to the soundtrack for the upcoming Vol. 3. Bautista revealed that he’s a huge Journey fan and that he’s also a huge Harrison Ford fanboy. Sean Gunn discussed doing the motion capture for Rocket and how excited he was to meet the other actors in Infinity War. He also revealed that during scenes for Guardians, the actors have the Awesome Mix playing in earbuds while filming to capture the groove of the music.

Day Two was even crazier than Day One. The second outing featured about double the guests, which made lines for food and autographing even more of a hassle for diehard fans. However, this slight predicament gave me a chance to explore something much better: Artist Alley. While many come for the entertainment guests, others come for the awesome designs and comics from various artists looking to show off their work. There’s so much to enjoy here. These people are all devoted fans to the culture of nerds, making this an even better time. Getting to meet the author of a book I read when I was younger was a great experience.

The first panel of the day was for Khary Payton of The Walking Dead and Teen Titans. Known to many as Ezekiel or Cyborg, the actor gave some insight into his portrayal of the characters. Nothing like his zombie apocalypse counterpart, Payton is a pleasure to be around and is quite entertaining and funny. He revealed more about the fight scenes on TWD, explaining that the fight scenes with the walkers are very minimally-choreographed, acting as a more fun alternative to the fight sequences with other actors. He also revealed *drumroll* Young Justice: Season 3 has finished recording! It will arrive on DC’s streaming service later this year. I also checked out a smaller panel focusing on writing across mediums, which also proved to be quite interesting. I picked up some helpful pointers and learned more about the process of getting your stories across to people.

The final day was much more low-key than the second. There were people coming and going, but at least you didn’t have to wait in line for an hour to get a slice of pizza. I explored Artist Alley one last time and then took off to the first panel of the day, featuring This is Us‘ Milo Ventimiglia and Justin Hartley. Fans were able to ask questions to the father-son duo and they revealed many things about the behind-the-scenes element of the show. Hartley said that Sterling K. Brown actually reads the script for him, which was one of the funniest things I’d heard that weekend. Ventimiglia talked about his character, and how he wanted to be respectful about the topic of addiction, which Hartley agreed with, as both of their characters struggle with it. He also watches The Marvelous Mrs. Maisel. He told fans to always be themselves when trying to make acting into a career because casting directors don’t want somebody you’re basing yourself on.

The next panel focused on Charlie Cox from Daredevil and The Defenders. He talked about the character of Daredevil, explaining that he didn’t think he would resonate with audiences as much as he did. His favorite of the other Marvel shows was Jessica Jones Season 1, saying that negotiating friendships with Krysten Ritter onscreen was great. He also answered a fan’s question about the love interests, going on to explain that Karen is Matt’s true love but Elektra knows the real Mat and brings that out in him. When filming an emotional scene, he’ll engage with people so that it feels more real. He said it’s fun to explore the team dynamic with The Defenders, and that working with all of the other actors was a blast.