It’s been over a year since the first season of Netflix’s teen drama 13 Reasons Why premiered. The show, based on Jay Asher’s book of the same name, followed the aftermath of young Hannah Baker’s suicide on her high school and loved ones. Before she died, she recorded thirteen tapes chronicling the reasons why she killed herself (and the people behind them). Now, the second season is out, and it continues where the first left off. Hannah’s parents’ trial against the school has moved forward, and now the subjects of the tapes are preparing to testify. Clay (Dylan Minnette) is continually haunted by visions of Hannah. Alex (Miles Heizer) is recovering from his attempted suicide. Jessica (Alisha Boe) is still recuperating from her discovery of her rape by Bryce (Justin Prentice), who is dealing with the fallout of his actions against girls.

When I began this season, I was excited. I loved the first season greatly. It was one of the tensest and riveting shows I’ve ever seen, exploring one girl’s harrowing journey and the people that caused it. You saw her pain, her struggle, and her eventual downfall as she took her own life, leaving her parents to find her body. Unlike others, I found this season perfectly necessary. I made plenty of sense to me that there was more story to tell. While that involved deviating from the source material, I actually found this season quite entertaining.

My main issue with this season is the focus on the trial. This season shifts focus many times, which gives the first season an edge over this one. That being said, I felt much more engaged while watching the sections revolving around student life. Many pieces of the trial felt uneven, and the eventual outcome was extremely disappointing (though I should’ve seen it coming). I probably would’ve been more interested in the trial if there was more time spent on it. It felt pretty rushed and sidelined in the long-run. However, there’s no excuse for disjointed storytelling.

This show also ventured into what I like to call “Riverdale Territory” this season. A show drifts into “Riverdale Territory” when it tends to become largely unrealistic, predictable, and corny, often finding no reason to justify its own existence. I kid you not, there is a scene in this season where a school-wide brawl breaks out. This would normally be acceptable, but even the teachers join in! It was unintentionally hilarious but still shows how shows can suffer in their sophomore season. 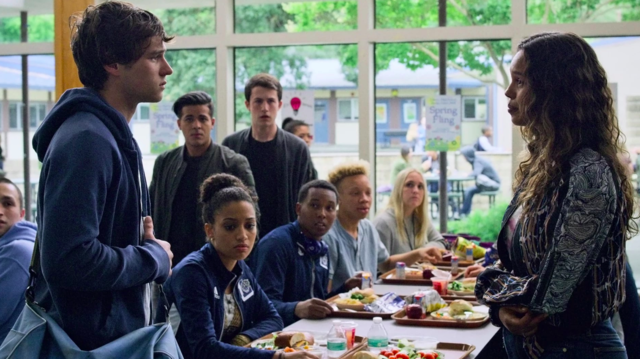 I do really like the time spent on each character this season. Each one gets their own separate arc, which was definitely nice to see. While we mainly saw Hannah’s struggles in Season 1, that was her story. Suicide is a chain reaction, affecting everyone around the victim. Their friends. Their family. We now get to view her story from their perspective, giving a fresh look at how everyone is affected.

I understand that the point of this program is to detail events that occur in daily life, but the people behind this show definitely bit off more than they could chew with the finale. The graphic depiction of Hannah’s suicide in Season 1 was unnecessary enough (she took some pills in the novel), but there’s a horrifying scene depicted at the end of this season that was extremely hard to watch. I won’t go into detail about it, and, like I said prior, I understand the reasoning behind this show. But this was a scene that was not only uncalled for, but also (in my opinion) played for shock value, and for that reason only.

13 Reasons Why: Season 2 never manages to hit the heights of its predecessor, but still serves as a semi-worthwhile follow-up. The majority of the season is trite and struggles to justify its own existence, but by the end of the season, it’s clear that this show needed some extra room to grow. It’s certainly not perfect, in fact, it’s imperfect. But it still manages to hold your attention until the very end with its fully realized characters and pacing.

Official Synopsis: An animated adventure for all ages, with original music and an all-star cast, “Smallfoot” turns a myth …