It’s going to be a Massive Monday over at Figures Toy Company because the first shipment of the summer will deliver a slew of superheroes, secret headquarters, and slammin’ wrestling stars to their warehouses! All of the following items will be available to order on www.figurestoycompany.com in just a matter of days, so read ahead to see what you’ll be able to add to your collection!

First up, the World’s Greatest Heroes get some help from Supergirl, as FTC is releasing 2 new versions of the popular heroine! The Supergirl From Krypton, clad in her classic blue and red costume, will join forces with the other legendary DC Comics characters that are already available. Another version of Supergirl, based on the story from Superman #123 (which showed us “The First Super-Girl”) is also being released! This version features the young heroine in an orange and green costume as seen in reprints of the famous issue, and a different head sculpt than the other Supergirl release.

Two Supergirls is bad news for the bad guys, but FTC’s created double trouble for their World’s Greatest Heroes with two versions of Two-Face! A Prisoner variant will fit in perfectly with previously released Prisoner Joker and Prisoner Penguin figures, and the “Two-Face Strikes Again” variant will feature the diabolical Harvey Dent in an orange and green suit, with the scarred side of his face now presented in a purple shade as opposed to the green on FTC’s original Two-Face figure from the Batman Retro Series.

Speaking of Batman, one of the most popular figures from his world would be none other than Harley Quinn, and an unmasked version of the iconic character is here! Previous versions of Harley Quinn have sold out fast at Figures Toy Company, and with this being, both a new version of her, as well as the first Harley figure at FTC in some time, collectors might want to act fast on snagging this feisty female! 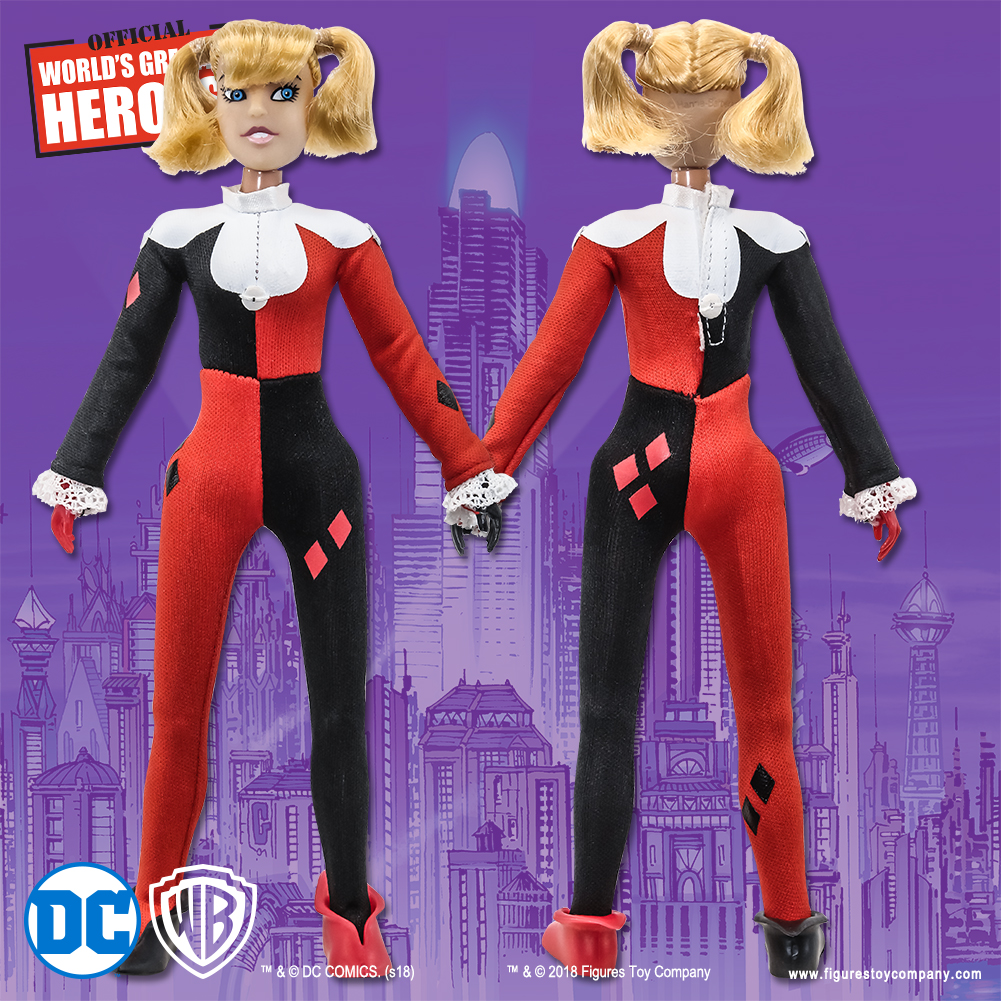 Retro figure fans can now finally turn their homes into Batman’s headquarters, as Monday means the release of the highly anticipated Batman Classic TV Series Batcave playset! You don’t get more retro than the Batman television show, and this playset has been patterned perfectly after everything you saw on the small screen! From a new Bat signal to Gotham City scenery, and even accessories and a Batman figure, collects will enjoy playing with or displaying Batman’s base of operations for years to come!

FTC is also taking a break from all the superhero action, as they’ll also be releasing a new 18-inch retro figure collection for The Monkees! The good times just got even bigger, as Davy, Peter, Micky, and Mike will once again capture the hearts of collectors courtesy of Figures Toy Company!

Lastly, for fans of FTC’s professional wrestling action figures, new additions to their Legends of Professional Wrestling line will be in this shipment! One of the all-time greats in the world of Lucha Libre, Juventud Guerrera, will get his first modern era action figure courtesy of FTC! Not only that, but in conjunction with their KISS license, Figures Toy Company has crafted an amazing action figure for the cult favorite The Demon, a wrestler based on Gene Simmons’ iconic costumed appearance!

Don’t miss out on Monday (or any other day)! Set a reminder to visit www.figurestoycompany.com to take their newest offerings home as soon as they drop! The warm weather is just starting, but things at FTC are already heating up with so many amazing figures to collect from this assortment alone. All the latest information on Figures Toy Company’s products can be found here at Second Union, and consistent updates and previews can also be found on our social media. Make sure you’re following both Second Union and FTC, and stay tuned for more additions to all of your favorite FTC figure series!