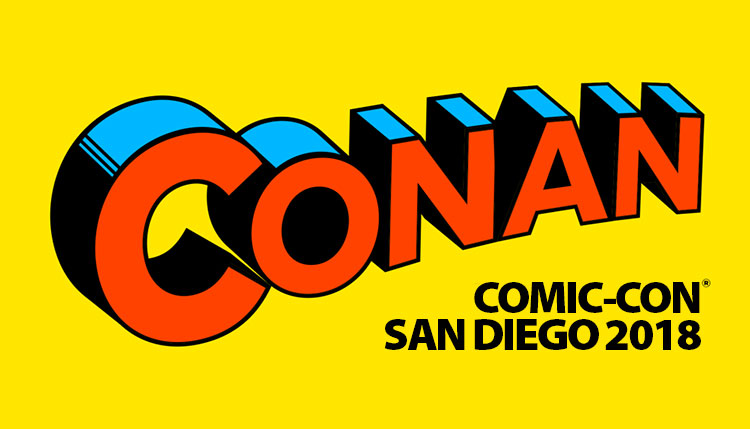 Celebrity Guests Include the Stars of Breaking Bad, The Predator, Glass, Aquaman
and More To Be Announced

LOS ANGELES, JULY 2, 2018 — Conan O’Brien returns to San Diego for the fourth year in a row with a week of star-filled shows to be taped during Comic-Con® International. This year’s roster includes the stars of the of the Emmy-winning sensation Breaking Bad reuniting for the 10 year anniversary of the show, the stars of Glass, The Predator, and the stars of Aquaman, with more to be announced.

The following is the schedule for the week’s episodes and guests:

Sunday, July 22
The Cast of Aquaman: To Be Announced.

As in years past, CONAN audience members will receive one of four limited edition Funko Pop! Vinyl Figures available during Comic-Con® International.  Those not lucky enough to attend shows in person will have an opportunity for a Nightly Instant Win Giveaway.  Conan will announce a code each night on air from his San Diego tapings.  Enter the code at teamcoco.com each night for your chance to win. Also, follow @conancon on Instagram for more information and giveaways throughout Comic-Con® International.

To bring fans even more access to all things CONAN in San Diego, Team Coco has partnered with DIRECTV NOW to debut: @ConanCon, a new Instagram handle that will serve as the official hub for your #ConanCon information with exclusive behind-the-scenes photos, giveaways, ticket and celebrity guest updates, and much more! And it doesn’t stop there. Returning to the roof of Spreckels Theatre, the LIVE @ConanCon show will stream each night across Team Coco’s social handles, giving fans at home access to bonus content.

And don’t miss the Team Coco and SNICKERS® brand ambassadors, who will be hitting the streets of the Gaslamp District and encouraging fans to show off their best (or worst) version of CONAN’s iconic string dance. Fans will receive social-ready GIFs and SNICKERS® bars – either for a job well done or as a boost to help fight off those hunger symptoms and improve future dance skills!

Each night during the week of shows, fans will have the opportunity to win exclusive CONAN access in San Diego. Thanks to State Farm®, life will go right for a few lucky con-goers, who will be awarded VIP tickets to attend that night’s Team Coco House comedy show and show tickets for the following day at Spreckels Theater.

CONAN airs Monday-Thursday at 11 p.m. (ET/PT) on TBS. The show is produced by Conaco LLC, with Jeff Ross serving as executive producer.

The TBS app is available for iOS, Android and other platforms and devices.

Turner, a WarnerMedia company, is a global entertainment, sports and news company that creates premium content and delivers exceptional experiences to fans whenever and wherever they consume content. These efforts are fueled by data-driven insights and industry-leading technology. Turner owns and operates some of the most valuable brands in the world, including Adult Swim, Bleacher Report, Boomerang, Cartoon Network, CNN, ELEAGUE, FilmStruck, Great Big Story, HLN, iStreamPlanet, Super Deluxe, TBS, Turner Classic Movies (TCM), TNT, truTV and Turner Sports.

This July, California is really going to be nerd mania for those attending the D23 Expo (July 14th-16th) event …

Three weekends ago in Anaheim, California over 60,000 people gathered to attend Wondercon, the sister Convention of San …